The irrepressible spirit of green guides Ruth Padel’s new collection Emerald – in terms of inner and outer growth, mysterious stone tablets and the lucent mineral itself, ‘a seam / of dazzle green’.

Emerald is a tender and sustained honouring of the author’s mother Hilda, and the particularities of her dying, in 2017. ‘This is to do with lostness’ reads the opening line of the opening poem, and Padel uses the emerald as her lodestone, her light-in-the-dark for ‘bringing life / back from the dead’.

For Padel, green-ness is, in the words of William Carlos Williams, a ‘solace’ mined from deep seams of precious mineral and personal material:

how anyone in darkness longs for green

for the animal life which goes with green

The question of loss and how to begin to articulate it (or not) has occupied poets for millennia. I could not read Emerald without thinking of two recent collections also written in response to grief. Denise Riley, in her long sequence ‘A Part Song’ from Say Something Back, switches tonal registers in knowingly torturous efforts to reach a lost son. Meanwhile, the ambiguous space of an absent mother fills Emily Berry’s Stranger, Baby, as a grieving self undergoes multiple iterations towards a sort of tentative acceptance of what is no longer here. Emerald, which deserves to be appreciated alongside these two collections, is different again, restless with adventure and rich with cultural and historical references although, refreshingly, they are borne lightly.

The opening poem, ‘The Emerald Tablet’ – a reference to the ancient text attributed to Hermes Trismegistus, supposedly containing the secrets of life, death and the universe – sees Padel ‘lost’ in the world following the death of her mother, as she embarks on a philosophical and personal quest into the inner landscape of grief:

This is to do with transformation

and where they are inside you

once they are gone.

Above is the same as below.

I have set up a headshot of my mum

by the kettle in a wooden frame.

I meet her eyes

Like Riley, Padel articulates the discombobulation of grief and ‘the tricks your mind can play / about absence    pattern     longing’. She experiments with many perspectives to describe this baffling sense of loss with the simplest imagery often the most affecting:

joining outside to in

where a hare was sleeping a moment ago.

This clarity serves to heighten grief’s bewildering void: ‘all of us / sifting the dark / in our anonymities     and hope.’

Emerald is rich with psychoanalytical references with Padel name-checking Freud and Jung. She stretches her metaphorical muscles to compare the geological process with the formation of the unconscious:

I thought of Freud     how the unconscious

is constructed geologically by pressure a kind

of archaeological layering under the soul

While Padel is very occasionally in danger of becoming florid, her finest writing of the inner life is animated with a kind of astonishing brio. Writing of the ‘deep-iron-cast relationship’ with a father figure, for example, the mind is:

[…] in thrall to the drunk coachmen of repression

translating stony idioms of the underworld

to neurons in the brain

always ready to pop up unbidden

triggered for instance by a mother’s death.

The poem ends almost wryly, with its own self-awareness of all sorts of buried beasts:

Here they are     the old monsters.

Another way of examining, quite literally, the matter of grief sees Padel as scientist-poet catching tears with a pipette and examining them on a microscope slide before installing the ‘dark field’ light technique.

Everyone     some moment in their life

to recognise the peculiar shapes of their own tear

~ ‘The Crystallization of Tears’

Padel also uses geology as an unusual way of writing about loss, and thankfully does not overdo the mining-for-emerald trope. For example, a ‘clast’ is a fragment of rock broken off other rocks or minerals, which Padel appropriates deftly:

When your mother dies

There’s no one left to hold the sky.

and what can you value

under the mountain range

the bedrock question till too late.

For me, the most affecting parts of Emerald concern Padel’s poems about motherhood. Writing of mothers, and mothering, can become bogged down in particularities or washed into generalities – Padel manages to create a strong sense of Hilda as a tangible presence yet broadens this into a universal grief for the loss of The Mother:

of a cry from the broken-open heart

for all our mothers.’

The tone of address in ‘Nursing Wing’ is particularly moving. Padel addresses the air itself in the nursing wing where a dying mother in turn is ‘labouring’ ‘losing’ and ‘lifting’:

Forgive me     little wing     for opening a window

when we filled her hands

with snowdrops and myrtle

to let her spirit out

losing you in compound shiftings of the breeze

The poem ends with a conflation of flight-as-death, as the air of the nursing wing and the mother herself are imagined lifting ‘into the smoke of ordinary life’.

The final poem, ‘Salon Noir’, is set deep in the pre-historic caves of Niaux in France and links beautifully with themes of journeying inward in the opening poem where what is ‘buried in earth in flesh and in your mind / is all the bright surface of the world outside / and is divine.’

Padel and her family venture ‘a little afraid’ into the Salon Noir’s painted cave. Here ‘wild knobs of embryonic stalagmites’ glisten and within the space of one line, time expands and deepens from a single afternoon into millennia. Appropriating the voice of the stalagmites, she writes:

they said to our stout shoes     we have time

we are time     the texture itself.

Circling back to the quest for the ‘meaning of life’ contained in the apocryphal Emerald Tablet, Padel encounters her own truth-in-loss in a hard-earned resolution:

Here in deep earth     the black

blossom of mourning still sifting within me

I remembered that emerald was my birthstone

mined in the dark

Emerald is book of a wild and generous imagination from a writer at the peak of her powers. It offers up a rich excavation of the truths and mysteries found in grief – and should be of interest to any reader concerned with the limitations and beauty of the human condition. Articulating the limitations of poetry-as-elegy Padel writes gracefully: ‘All we have all we ever have are words’ and it seems fitting that from the midst of ‘lostness’, Padel has created a collection that is very much alive with uniquely restless, questioning intensity. 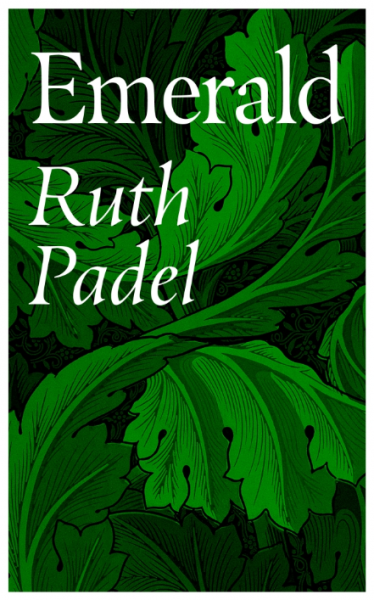 You can find out more about Emerald by Ruth Padel on the Penguin website.