These accessible, entertaining, often moving poems sometimes thrillingly embrace the fantastical, as the poet imagines herself into the head of a conjuror’s apprentice, or the world of a vaudeville end of the pier show. Elsewhere, Simon finds the significance and beauty in the process of plaiting a daughter’s hair, or watching an episode of ER with friends. In all of this, her work might remind us of the poems of Kathryn Simmonds; like Simmonds, she has benefited from the Jerwood/Arvon mentoring scheme, and the level of linguistic and formal polish and refinement in these poems allows her to do some spectacular things.

The first thing a reader notices about Simon’s poems is their brilliant titles. From ‘I Confess My Sins To The Electronic Scales,’ through ‘How to Bake A Gingerbread Girl,’ to ‘The Ghosts Of Hitch-Hikers,’ rarely can there have been a collection of such excellent titles. It is a poem with a much simpler title, though, ‘Penknife,’ which for me gives the best indication of Simon’s potential. The poem begins with the speaker noticing something in a magazine:

It was a double-page colour spread:

the man, the rock, the penknife

used in the desert to sever his own arm.

This story will be familiar to everyone who’s heard about Danny Boyle’s film, 127 Hours, but it’s what the poem does with this which is interesting. The writer gives us vivid and unsentimental descriptions of the violence (‘He had to break the bone before he could/slice through’), before layering on the emotional weight of the speaker’s interest in the subject – the anxieties of an expectant mother:

At that point I didn’t know which way

I would be split: hip to hip or vaginal tearing,

From there, the poem moves towards a brilliant ending, in which the concrete detail, the violence and repetition, carry all the weight of the expectant mother’s anxiety, the restraint of the poem creating such power:

the yellow marrow cradling the bone,

the sand rust red, the scree, the sweat, the dust

Another favourite poem is the opener, the wonderfully-titled ‘The Parts of Ourselves We Leave With Former Lovers.’ Set in a nineteenth-century French brothel, the poem is spoken in the voice of the brothel owner or madam, giving us their reaction to the fact that one of the clients has sliced off his ear and sent it to one of the prostitutes. The speaker is wonderfully indifferent: ‘An ear! There, there, it is a shock I know, /but not the worst we’ve seen.’ Then we are given this wonderful piece of writing:

once. The fat signet ring attached like a tourniquet.

The smeared gold, we said, reminded us of summer sunsets

The specificity of the image in that final clause is wonderful, and is typical of one of Simon’s best assets in the pamphlet: the ability to reach from the gritty towards a sort of transcendence. The reflection on eating, weight and guilt in ‘I Confess My Sins To The Electronic Scales,’ for example, ends with the wonderful image of the speaker dreaming about ‘the pelvis of an angel/so light the air shines through.’

‘The Parts Of Ourselves We Leave With Former Lovers,’ by contrast, ends hauntingly. As we’ve seen, Simon does not shy away from violence, and the lack of squeamishness in this poem is one of its strengths: ‘Look at the raggedness of this edge. It’s not just eyes/that let us peep into the thoughts of men.’ The prostitute is told to take the ear ‘upstairs/to the cabinet…that is beside my bed,’ leading to an ending which gives the poem an effective afterlife:

It was moved from Claudine’s room –

the sound of souls tapping against the wood,

and disturbed the night-time callers.

As in any debut – as in any collection, of course – not all the poems in Dragonish are as strong as this. ‘TripAdvisor™ Reviews For The Overlook Hotel’ is a wonderful title and concept, appearing to be a found poem – or one which so artfully replicates online hotel reviews that it could be a found poem:

The hotel management needs to undertake

in the suite above. The lifts were filthy.

While this poem is entertaining, helps Simon show range, and is artfully constructed, it doesn’t quite have the power on display elsewhere; it risks being only as significantly entertaining – or as entertainingly significant – as the actual experience of reading online reviews.

Dragonish is packed, though, with far more hits than misses. ‘Plait’ gives us a simple description of the speaker fixing her daughter’s hair: ‘Wind the first over the second, then cross/the third over the first, and so on.’ It opens out though, into this beautiful ending:

Focus on this Tuesday morning:

across generations, mourning there is not enough time, but just enough hands.

In ‘Emergency Room,’ watching an episode of ER becomes as illuminating a way of describing a friendship as, say, cleaning brass with a friend is for Gillian Clarke in her wonderful early poem ‘Still Life:’

And by the time the defibrillators shocked

the man who’d had the cardiac arrest

– or possibly the carjacker caught in crossfire –

back to life, I felt a little loved again.

but from the kitchen I could hear you muttering

And ‘Morning Has Broken,’ finally, gives us a lovely, surreal take on the aubade and the chaos of the morning routine, which might remind us of William Empson:

The milk cried on the doorstep. We toasted blackbirds,

through the egg timer.

There would be an interesting PhD thesis on the impact of projects like the Jerwood/Arvon mentoring scheme, looking closely at poets’ writing before and after the process. The formal refinement, the elegant phrase-making and restraint of much of Dragonish is admirable, and the sort of thing one suspects can be gained from such a process. One wants to believe, romantically, that there’s a certain shambling amateurism in the best poems too, that the moments that matter are the places where the poem creaks or cracks and the breathing, messy human shows through. But Dragonish gives us a writer who is full of humanity, who clearly believes in the importance, power and – this might seem reductive, but isn’t – usefulness of poetry to illuminate the everyday, to take us by the hand. It’s a great introduction to a voice that will no doubt impress even more when given the opportunity to let itself go. 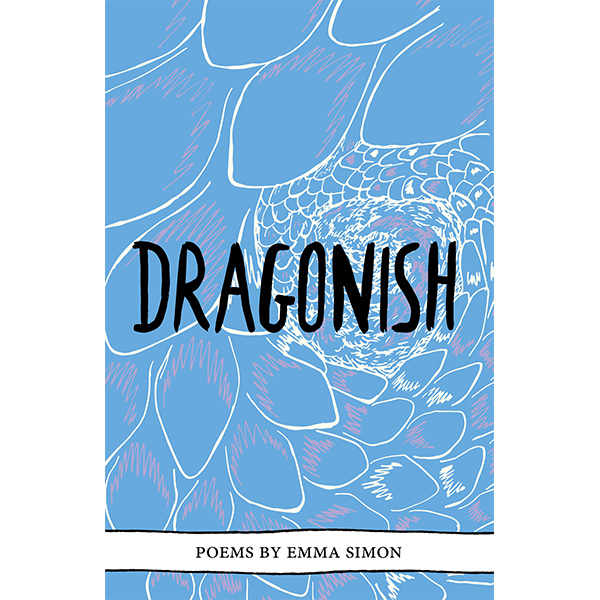 You can buy Dragonish from the Emma Press website.