Dora Incites the Sea-Scribbler to Lament (smith|doorstop) is a vigorous yes, confidently-voiced – at times puzzling, at times transporting – appealingly original. To read it is to enter a world made strange and lush with linguistic variety, audacity and delight.

The cover image – of underwater seaweed which I begin to suspect is looking at me like an eye – gives a clue to the otherworldness and unusual vantage points of the poems within. Clarkson’s is a world askew: in one poem an archetypal Edwardian lady plays piano with a “map of England shaved perfectly on her head”; in another, Miss Marple loosens her bra with a “licking restlessness”.

Let me plunge you in, with a segment from the title poem:

… After it all (they mate, like carapaces, in parentheses),
Dora feels coolness in new places, lifts a reused
razor shell, mother-of-pearly and straight

and signals out to the swell of mouldering green.
Dora is electric, in love, and deep water.
Dora, Dora, Dora in which dread is.

Here, as in many of her poems, Clarkson alters our perception of the ordinary through the use of unusual words, strange viewpoints and self-conscious sound-making (that surprising “DAW-RAAaargh!”). She avoids end-rhyme and (usually) employs grammatical correctness and the full toolkit of punctuation. Her writing is a heady mix of the prosy with the rarified, shot through with daffy wordplay (“there is no ‘Oh!’ in the ocean”), skew-whiff Catholicism (“the Holy Spirit peaked//on children who’d played truant”), and scenes of English and Irish life altered through high register and lavishness of vocabulary:

Nuanced at first, Nuala brutalised herself after seasons
in the cloister.

There is a cheek to that naughty pairing of “Nuanced” with “Nuala” in the second poem — as if Clarkson is daring us to believe she only paired them because of their matching “Nua”. But her words always pull their weight and this is indeed a poem about a woman losing ‘nuance’ through convent drudgery:

Scales of all kinds
to be dealt with – of fish, a glut every day in the kitchen; of tonic sol-fa,
to lubricate psalms in the chapel; of holiness, to which St Benedict assigned
seven degrees.

Again, Clarkson’s word choices thrill: that “scales” should relate to both fish and holiness; to menial work and to measuring the soul.

The poems linguistically delight, but that doesn’t mean they are always straightforward to enter. There is a push-pull to Clarkson’s writing: her vocabulary pushes the reader to notice the artifice of the work – we are made aware we are reading a written poem – at the same time as we are seduced, pulled in by her words’ sounds, energy … loveliness (and we should not underestimate Clarkson’s powers of seduction — her poems repeatedly rise to the top of competition lists).

Clarkson throws us a line in the poem ‘snow rules’, in which she describes a Dublin “made strange”, and hands us a key to the way her poetic process works:

This literary device of ostranie [ostranenie] – ‘defamiliarisation’ or ‘making strange’ – can be detected throughout the pamphlet. Clarkson turns the familiar strange most dazzlingly in ‘A-Man-at-a-Bus-Stop Sees a Perfect ‘O’’:

…The man’s eyes, mad with dreams – like beached seals or

ampersands cresting then rock-dashed, colonised,
open-and-shut in folds of high-rise cheek – see it all:

a mutilated shirt-tail of flapping schoolkids who wrangle
over a phone; flailing round a tubercular bus-pole which operates as

Has waiting at a bus stop ever been described so oddly and so well? High-fevered, this poem has the cinematic surrealism or hyper-realism of David Lynch or Baz Luhrmann. Technically, there is a tricksy word-game going on: every stanza begins with the letters ‘am’/‘o’, building to the poem’s finale “amo, amo, amo”. But Clarkson is never just about cleverness. With the “amo” repetitions the poem becomes an incantation to love, a fleshed-out conjugation of the Latin verb amare. The poem might also be seen as an adoration of the ordinary.

Another aspect of Clarkson’s ‘making strange’ is a carnivalesque consideration of the bodily. Dora features a baroque cast of characters who draw attention to feminine masquerade: from the queenly conch “meat as heavy/as half the haunch of a woman” to woman-as-fudge-cake with “a piped creamy smile” (part of a sisterhood of cakes), to the hostess who:

(puffing, dabbing at moist cleavage)
brings them steaming bronze tea
shortbread angels, clotted cream eclairs.
A hardness in my heart rubs
against the bedroom furniture.
Vinegary flavours in my gullet
taint the milk. …

~ ‘A Less than Sainted Summer’

These poems assertively write the female body, in which desire is like “table-linen/in the redhanded grip/of Irish washerwomen”. I am reminded of the fleshiness and provocation of Angela Carter — perhaps Clarkson is talking back to Catholicism the way Carter talks back to the fairytale? This subversive description of the “women of the blue flowers” illustrates how Clarkson recasts the Catholic female body:

… At day’s end,
the rhythm of the hours pauses on its cusp and the women reclothe
themselves in midnight blue, clutching the stars, women of the blue faeces,
dusting the moon and sinking down naked to dawn and Lauds.

There’s more playful subversion in ‘The thing about Grace and Laura’, where Clarkson describes “sisters, vice versas” in a kind of psychedelic rewriting of the Bible story of Mary and Martha: one with “flesh like marshmallow; / her demeanour like Turkish Delight”, the other with a “belt-buckle tongue”. The female writer gives Catholicism some lip in ‘Homily of Francis’, where the Franciscan saying “only use words if you have to” is disrupted by a list poem, resplendent with half-rhyme and alliteration. She praises glorious things by foregrounding the equally glorious words that describe them:

If the pamphlet has a unifying story it is the woman unbridled, desiring, finding her tongue. A rejection of the “circumcision of spirit” and the pursed-lipped. ‘Write Yourself in Winter’ (one of several poems featuring writing), opens:

and instructs her to:

Move quickly. Angels jostle
to shout ‘no’ through your mouth.

Dora Incites the Sea-Scribbler to Lament voices a yes, recasting the world on Clarkson’s own imaginative terms, with a deliberate strangeness that allures and distances. These are not ‘confessional’ poems: although intimate, they give away little about their creator — which may frustrate some readers. But they are poems of female empowerment — to use an outmoded phrase that is perhaps newly-current given the recent global women’s marches. Let’s return to that speaking sisterhood of cakes:

Last night I dreamt I was a cake, a squat brown gateau
dimpled with cherries above a piped creamy smile. Inside,
falling-away fudge, and smudgy – almost not-baked sweetness.

[…] This is the path to reintegration, the dream
therapists say. My inner cake begins to clarify; confect.

The woman’s (surreal) imaginative experience of her body leads her to ‘confect’ – aka create. French feminist Hélène Cixous, theorist of feminine jouissance, asserts “woman must write herself … bring women to writing, from which they have been driven away as violently as from their bodies”. It is no mean feat that Clarkson evades the personal while inscribing both the female body and the female writing self in her poems, and does so joyfully, with creative aplomb. 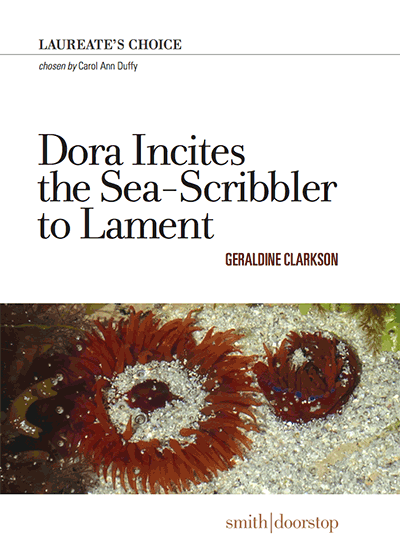