For some, childhood innocence erodes slowly with each new experience. The lucky ones get to occupy this safe, uncomplicated realm – at least for a time. The longevity of this illusion often depends on the adults around us. For Jodie Hollander’s protagonist, the illusion is broken at a young age, a recurring sensation that is explored throughout My Dark Horses.

‘The Storm Horse’ is set during a family holiday, and as the speaker explains, ‘Those were the days when I still believed / my mother would always try and keep me safe.’ Her mother pressures her into joining her on the back of a horse, and they ride into the rain together. When lightening frightens the horse and they fall off, the mother seems less concerned by her crying daughter with a ‘long gash’ on her leg, and more excited by a moment of danger: ‘she threw back her head and opened her mouth, / and I watched how she drank in the storm.’

While this experience offers the speaker a glimpse beyond her childhood bubble, ‘The Sound of Scissors’ is a more overt example of the mother’s destabilising influence:

It seemed to be her favourite thing to do,

the very same thing her own mother did

on Sundays with a pot of jasmine tea:

then take the scissors, and start to cut out

news articles – the things we need to know:

‘No Hope for Dying US Economy;’

This compulsion to foist bad news on her children is explained insofar as her mother did the same, demonstrating how unhealthy behaviours can repeat across generations and even provide comfort (enjoyed with ‘a pot of jasmine tea’). The speaker, however, finds it disturbing: ‘I’d play my Smurf records again, and again, / trying to drown the sound of Mother’s cutting.’

In ‘The Chicken Lady,’ the speaker appears to test this apparent indifference towards her welfare by setting ‘the whole living room on fire.’ The results are underwhelming: ‘at least nothing important got burnt / like Mother’s cello or Father’s Steinway piano; / and at least no one really got hurt.’ That the parents – both musicians – live for, and through, their music, is something their children struggle to understand or accept. In ‘Transporting the Piano,’ Hollander portrays the untraversable distance between father and daughter as they engage in a routine of taking a lift up to some rehearsal rooms:

we’d wait in a dim corridor

for that giant elevator to rumble down,

open up its doors. We’d step in.

My father in one corner, I stood

in the other – neither of us said a word:

between us was the space for a piano.

Their lack of connection is underlined when they reach the rooms – the ‘clash of sounds’ is discordant to her but makes sense to him: ‘Sometimes I’d cover my ears, but by then / my father was humming’.

This interaction is gentle compared the mother-son relationship depicted in ‘The Migraine.’ The speaker’s brother, forced to practice the violin for hours, develops a bruise: ‘a black storm cloud between his neck / and jaw. The mark of a good violinist, / she said, stroking it gently.’ This action rather inappropriately suggests pleasure. The exhausted boy collapses and continues to be troubled, even in sleep:

At night, the bruise crept upwards,

becoming a brainstorm that tortured him,

thundering straight through his skull,

sending sharp bolts to his forehead.

back to Mother. She’d greet him

with her favourite recording of Itzhak Perlman

the dark bruise forming on his throat.

The mother’s cheeriness (playing a favourite piece of music is presumably intended to convey pleasure) is a jarring response to her son’s discomfort, subverting traditional expectations of the maternal role.

At the book’s mid-way point, Hollander begins to focus almost exclusively on the evolving mother-daughter relationship. The speaker’s illusions are shattered once more as she learns new information about her mother. ‘The Red Tricycle’ begins with the mother riding a bike – a gift to herself for her sixtieth birthday: ‘lounging backwards on the adult trike, / speeding through the park and showing off. / I’m the talk of the town, Mother boasted […].’ We learn that the tricycle was promised to her years before, by her father:

Instead he brought her back to his bedroom

and had his way with her young body.

He made her swear never to tell a soul

then went upstairs to practice his musical scales.

She too realises at a young age that the adults around her are unreliable. Following this incident, the speaker’s mother must even comfort her own ‘weeping’ mother, listening nearby. Suddenly the mother’s compulsion to cut out bad news, to tell her children how dangerous the world is, makes sense.

Tragically, as the speaker begins to empathise with her mother, she learns that her mother has cancer – a piece of information that again places the speaker on uncertain ground. In ‘Skyping with my Mother,’ she softens towards the woman she remembers – now with ‘plastic tubes in her nose.’ The distance between them heightens the sense of impending loss, and the mother too shows unprecedented interest in her daughter: ‘You look beautiful, / she said.’ ‘The Last Time I Saw Her’ demonstrates the extent to which their roles have reversed:

The last time I saw her it was Christmas.

She was curled up sweetly on the couch,

beneath a thick pile of winter blankets.

How tiny she looked to me without hair

that I hardly recognised her as my mother.

Tell me everything about England, she said,

in a voice that reminded me of a little girl.

For the first time, the mother appears vulnerable and child-like, as if rediscovering a lost part of herself. But context makes this intimate scene inescapably sad, and as the speaker carries her mother to bed, they pass the cello ‘now locked up in its case.’ This powerful image communicates intense silence, and the idea that a part of her mother has already died.

With surprise and regret in ‘Zero Hour,’ the speaker realises that she has been taking time for granted, relying on ‘that vague sense that things / were always on the verge of getting better.’ As she attempts to understand and process troubling memories and emotions, dream imagery becomes increasingly prevalent. She experiences anxiety dreams about becoming a mother in ‘A Daughter,’ a possible sign that she fears losing her now child-like mother:

so of course I can’t yell,

Someone save my girl

when she slips from my grip

drops into the ocean,

and a herd of dark waves

Many dreams also feature horses; a symbolic link, perhaps, to the speaker’s formative experience on ‘The Storm Horse.’ In ‘Ruts,’ ‘blue-black mares’ fill her dreams ‘bringing wind / and rain and pebbles along with them,’ and in ‘Wild Horses’ she dreams ‘of the rhythm of their hooves, of things / that had once been unutterable.’ The horses become a means through which the speaker explores painful and unsettling life events in the hope that doing so may return her to a position of safety, or at the least, stability. At times, the horses offer respite from this difficult process: ‘White Horse’ is reminiscent of a fairy tale in which a flying horse offers her a means of escape.

The final – and title – poem ‘My Dark Horses’ offers no easy solutions but rather, hard-won understanding. The speaker imagines the peace that could come from joining the horses:

I’d spend my hours grazing in the sunlight,

And when it was time to move along I’d know;

I’d spend some time with all those that I’d loved,

then disappear into a gathering of trees.

Although she is not there yet (‘If only I were more like my dark horses’), the speaker can at least imagine a place where small pleasures are enough, where love can be given and received easily, and the possibility exists that endings are not always as hard, and final, as they seem. To join the horses suggests acceptance, but the type that comes from experience, and being able to look back over a lifetime and draw upon perspective that we are so often unable to grasp when caught up in day-to-day battles with loved ones. 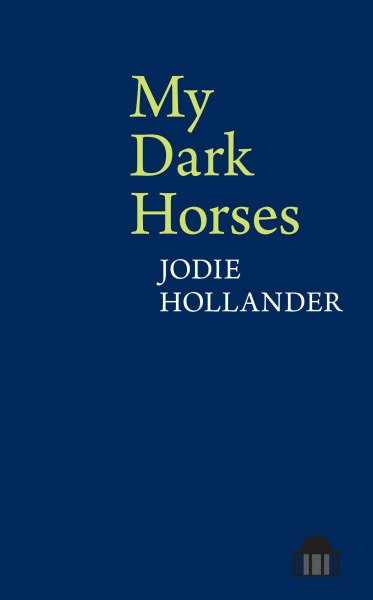 You can buy My Dark Horses by Jodie Hollander from the Liverpool University Press website.