This promising pamphlet showcases a fresh and original voice exploring the self as proud outsider challenged by family, relationships and the world but refusing to compromise. The poet’s biography tells us ‘he thinks that not belonging is more interesting than belonging’ and this is certainly borne out in the poems.

It’s a daring feat indeed to open a collection with the verb ‘I dreamt …’ but Sastry pulls off this time-travelling love poem with great style. The complete phrase is ‘I dreamt that we were older’ and reminds me uncannily of ‘When I’m 64’ by The Beatles. I immediately warm to the ‘I’ of the poem as he invites me into the book with phrases like:

Our voices quavered but when they found clear notes

we felt the magic of it. There was nothing

to be coy about. Sometimes

we broke off, laughing because something ached.

The second stanza brings the speaker to waking in the present with the lover in his bed.

crunches into and you turn

as if you had been waiting

These images are distinctive, and the phrasing is both evocative and unusual. Hair crunching? I know exactly what he means.

If the first poem is about the benefits of connection, ‘Thirty-two lines on loss’ which comes later in the book, is all about the benefits of disconnection. There is a wonderful richness in the exploration of a day in which the speaker loses his glasses and almost enjoys the feeling of helplessness as he goes out ‘into the fog’.

my glasses. I left them on the table

in the café because I was tired

of looking at billboards and wanted some thoughts

of my own and because I liked the fog of it

but when I went to leave, they were gone.

It was Sunday and the opticians

were closed. I soon realised that the world

is full of monsters travelling too fast.

Sastry’s world contains more than its fair share of monsters and life is certainly challenging for this ‘second generational original’. He writes that at the thought of being able to see again:

I cried like a doll. I must have really hated the idea

of functioning again. I hated it so much.

I hated it so much that for a moment

the surprise of how much I hated it

stopped everything. Even the hate.

There’s a lot packed into this thirty-two line poem as it navigates the high street, the café, the dangers of advertising, and above all how difficult it can be to confront the world with clear vision and look at it directly without ‘fog’ to soften it.

And indeed, with a grandmother like the one he describes in two of the poems, life can’t have been easy. One of them is titled ‘I imagine my white grandmother as a colonist stranded by the retreat of the empire’ and another is ‘If my grandmother had had balls’. This is a gutsy title, and the poem is worth quoting in full for its sheer distillation of information and feeling:

If my grandmother had had balls

she would have been a juggler

and joined the circus

where she would have learnt

how to eat fire

and not get burnt.

Instead, she kept house

and is not missed.

One of the strengths of this very short poem is its balance of anger and compassion, the understanding that the grandmother’s frustration at her lack of opportunity is what turned her into the monster that nobody loved.

Just as the Grandmother is a kind of monster, so are some of the inhabitants of a re-imagining of Goldilocks framed in in five-line stanzas, like a slightly wonky ballad. Goldilocks in this version is a ‘wild girl’, adventuring into the forest to the bears’ house and reporting back. It’s not clear how reliable she is as a witness either:

… She said the bears lived

in a house of secrets a mile off the track.

She said she ran from the house, and still wakes

in the night, trembling. There are bears in her sleep.

The suggestion of abuse leads us to the next part of the narrative – and this is indeed a narrative poem – where, as often happens in police searches for missing people,

… we walked, a long line of women and men

reporters and dogs, into the wild night of the wild girl

with our axes and our noses and lifetime’s rage.

This group forcibly enter the house and we return to the more straightforward narrative and a discovery that is startlingly ambiguous:

We never found the bears but there were bones

in the ash we left: the skull of a child we were too late

to save; charred pieces of a man, perhaps

I puzzled over this poem, wondering if it was intended to be more than a re-telling almost in the style of a TV drama. It repaid several readings to reveal its complexities. Most of it unfolds in an unsurprising manner, apart from some luminous lines in the penultimate stanza, before the classic reveal of the bodies. Here, the poet’s particular and unique voice comes through more clearly, with greater depth and with more of a sense of discovery than in any other part of the poem:

… We were singing. We were parts

of a body that adored itself: because we were frightened

we loved each other, without realising.

What is clever is the mystery buried in the narrative: the group who are hunting for the missing seem to become a mob feeding off each others’ hysteria, projecting their own feelings of rage onto others. Are the skeletons those of the bears, or are they the bears’ victims? Was ‘the wild girl’ making up a story about them? Who are the monsters here? The bears or the people, or Goldilocks herself?

Juxtaposed with and in stark contrast to ‘Goldilocks’, the gorgeously titled ‘I was talking with my marvellous man-friend’ utterly charmed me with its open and simultaneous relish and fear of male intimacy, its wonder at the friendships between women as well as the desire to emulate them. Running directly from the title, the first stanza begins:

about our girlfriends with their friends and how it looks

so good the way they laugh together, like a dance you could

learn but not well;

Sastry isn’t the first male poet to write about male friendship but this poem is particular in that it is beautifully balanced between the longing for self-expression and the fear of self-exposure, in phrases like:

… I stopped looking for the mercy of regular trips

to the bar and the toilet and looked at him instead.

‘Complicity’, the title poem, with its metaphor of clowns, is positioned towards the end of the book. ‘Nobody knows where the clowns went’ is the first line, and clowns seem to be standing for immigrants who have perhaps been forced to leave the country, or at worst have killed themselves or drowned on a journey by sea, like refugees:

there’s a boy in Weston-Super-Mare

who says he saw, lined up on the mud at low tide,

And indeed, this poem delivers the most direct political message in the book:

The politicians are explaining.

If they have left, says the PM,

It was their choice.

I myself am the son of clowns.

We just wanted to disperse them

to prevent them from clustering together

The poem goes on to suggest that when we dispose of one scapegoat, we try to find another:

The Commission on Nightmares

has proposed a new terror of badgers

but we all know it won’t be the same.

I’m not entirely convinced by clowns as a sustained and sustainable metaphor in this context – their associations with laughter, silly costumes, entertainment, slapstick and circus rings, although visually interesting, don’t seem to support the poem at its centre.

Compare this to ‘The Office’ in which the metaphor of birds is employed to great effect: phones and birds are brought together to create a startling comparison of the natural and artificial worlds. Here is a density and depth of information and feeling conveyed with poetic simplicity:

… We do not have names

for birds in here. You can bring the name of a bird

in from outside, if you like. You can bring its call

on your ringtone, you can bring

possibility from a bird.

Sound is foregrounded throughout – a vivid way to convey the atmosphere of an office:

Keyboards slork and chirrup their way

through diets of words. The striped cough of the printer

punctuates the settling of sludge-mugs on the

woodskim tops. Everything has its

There is a pleasing variation of tone and form amongst Sastry’s poems, many of which benefit from their own ‘secret grammar’ and range from regular stanzaic shapes to ragged line endings, demonstrating the poet’s ability to match form and content. The poems are by turns vulnerable, angry and full of wonder; they are at their strongest when writer is being bold with language and image, using a developing diction all of his own which lends strong colour to his material. Unafraid to address large political and social concerns as well as smaller personal ones, this is an emotionally complex debut with a great deal of charm and freshness about it. 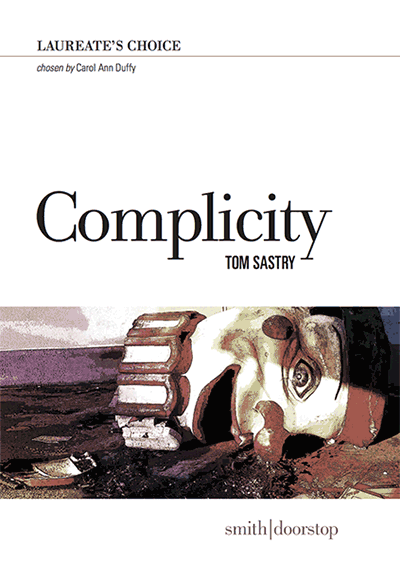