In many of Roxy Dunn’s Clowning poems, we encounter an acutely self-conscious speaker who is struggling to occupy an uncertain space between the safety and familiarity of childhood, and the expectations associated with adulthood that are out of reach.

In ‘5AM’ – an aptly liminal time between night and day – the speaker unexpectedly wakes: “It’s not quite light / am I getting old? / old people wake early / half a croissant is on the desk.” In their drowsy state, one fragmented and disparate thought leads to the next, as existential insecurity is replaced by a mild interest in leftover food. The speaker then guiltily returns to self-reflection:

I wonder if I care about the right things

I feel selfish and middle-aged

No single thought can be comfortably endured for long however, and the speaker’s attention leapfrogs again to a recently purchased record: “but I don’t have a record player / the band are from Leeds, is that cool?” The speaker exhaustedly veers between how they feel and how they think should feel, before taking the only action that seems viable – to eat the croissant, then sleep: “I think I’ll eat breakfast then sleep till noon / eat the remains of last night’s moon.” The final image suggests regret and an urgent desire to make up for lost time, symptomatic of ‘fear of missing out’ syndrome.

Attempts to fit in, and to develop a secure sense of self, are further complicated by an unstable and unfamiliar world. ‘Sunday Morning Apocolypse’ imagines a time when ‘ISIS are running Westminster’ and ‘we are bulbous with malignant tumours’ – the speaker’s anxiety regarding the country’s future is obvious, with concerns for their own fate audible beneath. Similarly in ‘Bastille Day,’ the comparison between real life and a TV show has great defamiliarising impact:

Every time I see the News I think

it’s all too farcical and quick

I think I’ll stick to stuff I know

but then how will I grow?

I do so want to grow

The question posed is powerful in its simplicity, appearing to address the reader directly in an almost desperate quest for answers, understanding, and a sense of direction: ‘I even bought a guitar / and a subscription to The Economist / is that winning?’ As in ‘5AM,’ the speaker typically copes with uncertainty by going through the motions and hoping for the best. Dunn frequently uses humour to diffuse uncomfortable situations and thoughts in her work, and so the poem ends with the proposition that we abandon all worries and have sex outdoors at lunchtime: ‘Never mind skin cancer / and getting things done / we’ll call it a happy defeat.’

The theme of human disconnection also extends to accounts of sexual relationships, as in ‘Hopper’ where the speaker refers to her latest conquest as ‘this one in my kitchen’ and distractedly muses: “Nineteen men since October / that makes me bohemian / or bored.” This same sense of detachment serves to muffle underlying panic in ‘Bad Joint’ as the speaker observes a sleeping lover: “Your arm hangs over me / a huge ham I’ve brought back.” The body is dehumanised and seems too big and unmanageable, matching the speaker’s tone of surprise regarding her actions, as if performed by someone else. The speaker now reassesses the situation in a literal and figurative new light – recalling ‘5AM’ – as a pun on dawning emphases the realisation that she not living a life that makes her happy, once more triggering the desire for self-improvement:

The dawning birds are warning me

toss them the rind on my way

The cycle of capitulation continues, as a brief and fierce fantasy of taking control collapses for an apparently feeble reason, exposing the speaker’s lack of confidence: ‘My dress has no pockets / I hate I’m going to stay.’

While reliance on humour, or on adopting different personas, staves off feelings of alienation for a time, moments of true contentment lie in the simple things and in abandoning the trappings of adulthood. ‘Mother’ is a refreshingly uncomplicated poem about the speaker’s mother’s gelato: ‘Your gelato is astonishingly good / I assumed Julie had made it.’ Addressing her mother, the speaker plans a Christmas visit, nostalgic for family life and childhood memories: ‘we can have it with lunch / and be unaccountably glad.’ That such a basic act should make the speaker feel so disproportionately happy reflects a lack of security and comfort in the present.

Similarly, the title poem ‘Clowning’ describes a whimsical day out in which the speaker experiences release: ‘You buy me a red balloon on Regents Street / I tether a silk bow tie inside Austin Reed / splay my Converses and shuffle to your side.’ The pair revel in mischievous behaviour, teasing a pretentious shop assistant and spitting out chocolate samples from a sweet shop, yet the tone shifts suddenly when the speaker notices saliva on their sleeve. As self-consciousness returns, the balloon is symbolically lost: ‘I rub my arm you prick my wrist / the string releases like an upward noose / You can’t take me anywhere can you.’ It would seem that the solace offered by engaging in childish behaviour is also temporary. The final line, which might otherwise be read as a joke, is darkened by the noose imagery, hinting at the shame that will send the speaker off once more in search of themselves.

Indeed, the notion of ‘clowning’ is one that unifies Dunn’s pamphlet. The tragicomic aspect to clowns captures the recurring contradiction between playfulness and adult angst, and evokes the performances that the speaker engages in. The repeated attempts to locate a secure sense of self see the speaker slip in and out of various characters (a nod perhaps to Dunn’s acting career), leaving the reader to similarly wonder – which one is real? 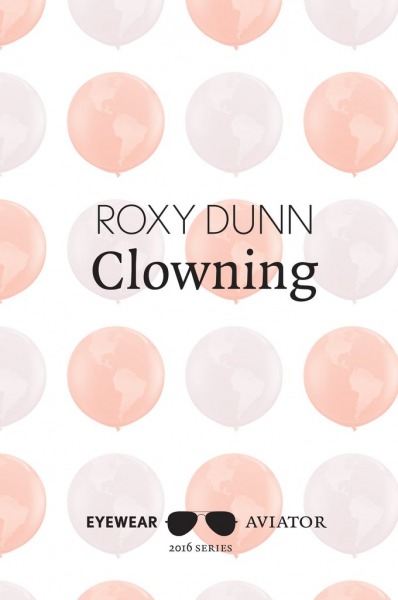 You can buy Clowning from Eyewear Publishing.