I read City of Bones (Northwestern University Press), over 200 pages of poems, in one sitting. I was completely held by this heart-full incantation, this uncompromising, philosophical and allusive series of narrative, lyrical and elegiac poems that ventriloquise the ‘multitudes of souls urgently and forcefully singing, shouting, groaning, and dreaming about the African diasporic present and future.’

The collection embodies Dawes’ ‘reggae aesthetic’, asserting poetically and musically the existence of a historical African soul that abides in present day African-American and Caribbean sensibility, and in this way continues the dialogue Dawes has long had with the work of playwright August Wilson (1945-2005). Dawes says City of Bones is undergirded by music: ‘There is much about gospel, the blues, jazz, American folk, highlife, classical music, great popular songwriters […] And perhaps most of all, I have so immersed myself in the music of August Wilson’s characters, in the splendid poetry of that abundant voice’.

The title of Dawes’ collection comes from Wilson’s A Gem of the Ocean (2004), which tells the story of the Middle Passage, the journey taken – over a period of more than 300 years – by more than twelve million Africans to their destination as slaves. The play describes ‘the city of bones’ in the depths of the Atlantic Ocean through the character of the matriarch and former slave, Aunt Ester. Dawes insists that this past must be fully embraced, that we cannot be ‘avoiding the spirits’, the ancestors: ‘They are always coming and / going; that is all they have / and I can sniff them out. / It is as simple as that.’ (‘Come and Go’). He insists that ‘No, until you learn / to look at me, your soul will always burn.’ (‘Mama Ola Speaks’). In ‘Mist’, he speaks of:

so many millions
gone, only to return

as if there are many
earths transparent
as the glassy film

of ice over a pond.
I don’t know names
anymore; the spirits

(what we call them)
are soft as clouds
or mist, they travel.

Dawes’ philosophical position is outlined in his book Natural Mysticism: Towards a New Reggae Aesthetic (1999), in which the poet says ‘Reggae, I believe, offers the closest thing to the kind of sensibility that T.S. Eliot saw in the metaphysical poets of the seventeenth century, a sensibility that engages in a dialectic of body and spirit, reason and emotion, a sensibility not yet divided by the dualism of western scientific rationalism.’  Dawes, who was born in Ghana but brought up in Jamaica in the 1970s, has also written a book on Bob Marley, arguing that reggae, with its working class roots, its mythology and cosmology, has had the most profound influence on the art of the Caribbean, in particular offering ‘models of formal expression’, as seen for example in the dub poetry movement, and in the great revitalisation of oral traditions in the emergence of spoken-word poetry.

The authority and confidence with which Dawes speaks in City of Bones: A Testament seems to be rooted in part in his belief system, but also in his insistence on a process of induction from the particular to the universal, something also shared by Wilson. The poet is always emotionally connected with the minutiae in their relationship to the larger, historical or contemporary experience, such as in the poem ‘Cross-burning’:

And the chicken
was sweet, the tea a comfort, the boot-
leg in the back making us mellow,
and this is how family grows
in the skin.  But you can see
that flaming cross wilting the wild
flowers at the edge of hill,

This is particularly true in his recognition of the implications of the distortions of power that occur between men, between women and men, between generations, in the context of the overarching injustice of white domination, as in the poem ‘Open Spaces’:

After you have broken your father with your hands,
killing is easy. […]

…………………………..It’s just a matter of a tool
swung right, and death happens.  In your head
it’s like breathing, since everything’s already dead.

The speaker examines his own feelings about these realities in his dialogue with Wilson, taking characters from the plays and introducing us to them. The mindset of Berniece from Wilson’s The Piano Lesson, for example, is explored in ‘Creed’, which starts with an epigraph: ‘Berniece don’t believe in nothing…she believe in anything if it’s convenient for her to believe.’

For Dawes, this emotional presence is a political necessity. In a 2016 interview he was asked how or whether African American poetry should respond to “this American world of racial unrest”. He answered:

He admires poets such as Claudia Rankine and Kamau Brathwaite for their courage in facing and pushing through ‘the things that confuse us, that leave us feeling answerless’, and in the same interview, invokes one of his great loves: ‘I am grateful to them in the same way that I am grateful to Gerard Manley Hopkins for trying to find the language for his conflicted and broken relationship with God in “Carrion Comfort” […]’.

[…] and as the startling
noise of your arrivals covers you,
you must lock teeth into each
other’s lips and bite for dear life,
bite for salt, bite for tears
to run down your faces, bite
as if a bit has been stuffed
in your mouth to stanch
the scream of a whip falling
wet and long across the back;
bite and hold on, and let
all the music of the night
surround you, until you are trembling flesh,
a humming woman, a stamping man,
between snores, between the giggles
in the walls, between the groans
of the timber straining against the night

Dawes’s is an extremely prolific writer with a great mastery of rhetorical skills. He is an orator, and as Aristotle argued, the orator gives priority not to form but to audience (although Dawes’ Shakespearean sonnet sequences comprise some of the most beautiful poems in the collection). And the way in which he prioritises his audience is by caring about them: he is one of them – exploring, discovering, doubting himself, and therefore able to encompass, include, gather in, and soar above. This is also apparent in the musical and mimetic qualities of his poetry, in the way he uses repetition and makes the reader wait, for example, in ‘Rose’:

The poet Shara McCallum posits that Dawes is a seer, that his elevated speech acts are a kind of prophesying, and that ‘The idea of a prophet offers a way to consider Kwame’s poetry and poetry’s rhetorical usages altogether.’ On the back of the book, Ilya Kaminsky asks ‘Why read Kwame Dawes? Because you cannot stop.’ This is what I discovered. 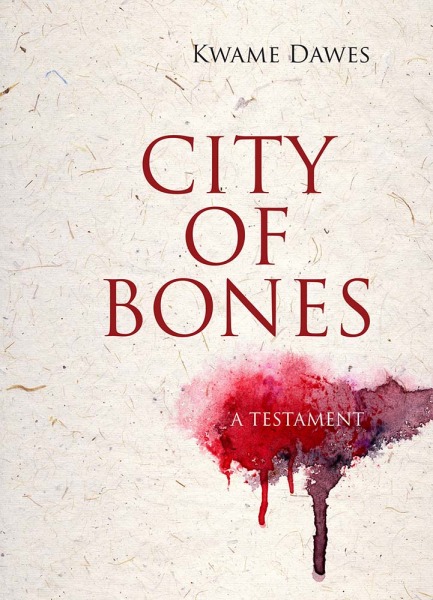 You can find out more about City of Bones from Northwestern University Press.

Leaf Bones by Umberto Salvagnin. This image has been cropped and a filter has been placed over it. Licence.