There’s a quality about Roy McFarlane’s Beginning With Your Last Breath (Nine Arches Press) that makes me want to step away from academic language when describing it, and instead focus on the thoughts and feelings that come to mind. That is not to say that there is little here to talk about – McFarlane’s command of language in this, his debut, is striking – but it’s the way the poems reach into the heart of human emotion that is even more impressive.

McFarlane’s voice is clear and strong, and there’s a commitment to storytelling that shines on every page. I’m not the first to notice this; in her blurb on the back of the book, Hannah Lowe – herself a poet that revels in the telling of a tale – writes “the need to tell resonates throughout the collection”.

This need to tell throughout McFarlane’s work is immediate. Divided into four parts, the first section of the collection focuses on motherhood, perhaps a given for a book that is dedicated ‘To Priscilla Araisa McFarlene, an extraordinary and beautiful mother’. The opening poem is a punch to the gut, and sets the scene for both the collection and the poet himself. Here is part of ‘Papers’, five stanzas in:

sit down son, there’s something I need to tell you

She picked up her heavy Bible with gold-edged leaves,

Turning the pages as they whispered and somewhere

in the middle of Psalms she removed a sheet of paper

and I’m lost in the reading of a name of an infant,

sinking in to the cream background, falling between the lines.

Only the tenderness of her voice drew me out of the margins;

We adopted you from the age of 6 months,

enveloped by this revelation I couldn’t move,

imagined it couldn’t be right because I knew my mother;

the aroma of her Morgan pomaded hair, her olive oiled skin,

the Y scarred throat that she hid under her buttoned up blouses,

In this passage, McFarlane’s adoptive mother becomes a preacher-like figure, the secret of his birth hidden within the musical Psalms of the Old Testament. The stanzas – ordered into couplets, with the occasional break – mimic the rigidity of the Bible they mention, or perhaps the order of a birth certificate. Similarly the stanza-forced pause between ‘somewhere’ and ‘in the middle’ is a catch of breath, a stillness after the smooth turning of the pages but before the shock of the adoption papers. This may be a story we are being told, but it is given to us in stops and starts, in spite of – or perhaps, owing to – the melodic, moving nature of the text.

Movement is something we find throughout these poems, often juxtaposed with stillness (as seen with the above). In McFarlane’s poetry, things are rarely static – not his prose, nor the things they describe. Instead, as in ‘Papers’, Bibles are ‘picked up’, pages are ‘turned’, the narrator is ‘sinking’, and words ‘fall’, all of which envelop the narrator until he ‘couldn’t move’. Gaining painful knowledge is shown as something that stills, as opposed to accelerates, an idea echoed in the lines of the villanelle that follows ‘Papers’ (titled ‘The weight of knowing’).

In this second poem, the narrator is presented with a photograph of his birth mother. ‘The weight of knowing her was too heavy to put on’ is the central line of the poem, a sentence heavy in both theme and its long consonants, and weighted further by the nine lines both above and below it. The root of the narrator’s heaviness in this poem is, again, adjacent to movement – in this instance, the four-times repeated refrain ‘this was the woman who gave me away’.

I land in the evening with all that I have;

a stomach filled with caged birds and despair,

thinking what the hell I was doing there.

Time is also something that moves out of order. In ‘Papers’, the tense shifts slightly throughout the poem; a memory ‘she picked’ in the past gives way to ‘I’m lost’ in the present, before his mother’s ‘tender voice’ draws him back. The closing line is both music and religion, a hymn he ‘finds himself telling her’ seemingly unconsciously.

In the first section of the book, the narrator finds his mothers – both of them – in the things around him. The truth of his birth is revealed on paper, and he sees his mother in a photograph, paintings, and within himself. In ‘Fragments of a mother and son story’, the poem ends with: ‘I see her and she sees me. / She cries out, / My son, my son.’

As the first section comes to a close, the following three sections focus more on finding oneself, albeit in different ways. ‘Finding X/Self’ is a fragmented exploration that revolves around a thrown away book. ‘I cried’ is a prose-like block of text that tenderly accounts all the emotions a man feels, from France winning the World Cup to placing ‘my mouth on you’. But it is the idea of finding home that reigns supreme, with Wolverhampton – aka ‘That place just off the M6’ – taking centre stage. In this poem, the sense of place is palpable:

that place just off the M6

in the middle of nowhere.

Where else would they go?

As the poems carry on, so too do the details: we are not merely in Wolverhampton but ‘The black corner of Wolverhampton’. Men – specifically, black and brown men – appear for the first time here, and persist in commandeering the text. In the poems that follow, we meet the narrator’s godfather ‘with his Sammy Davis Jr. smile’, a ‘Rastaman John the Baptist’, ‘Patterson, the old man of the neighborhood’, and painfully, Tariq Jahan, ‘Father of Haroon Jahan, killed in the Birmingham riots, August 2011’. In ‘Saving our Sons’, the poem that addresses the Jahan father and son, we read:

A father’s hands are red;

to keep him alive in the cradle of his arms.

The heat of his body,

the warmth of his breath

Ebbing away in the midst of rioting,

the chaos and destruction

drawn from the womb of our city.

the blood that flows through young minds.

Part eyewitness account, part aching memory, there’s a sense the narrator sees something both familiar and horrifying in the other man’s pain. ‘Our’ sons, he specifies, are the ones that need to be saved, and perhaps finding oneself – or at least, seeing onself more clearly – is the way to do so.

We continue also to meet more famous men; we illicitly watch Richard Pryor on the television, we compare people to Mike Tyson and Ali, we catch brief glipses of Malcolm X, Ghandi, and Daley Thompson. But it is Marvin Gaye who we hear multiple times, one of the many music references in the collection, and it is a quote from ‘Let’s Get It On’ that opens the third section:

‘If the spirit moves you

Let me groove you good’

In the closing poems there is a strong feeling of repetition as the themes from the first half find homes in the second. The subjects are however skewed slightly – we are taken back to motherhood, but this time, death; we find movement once more, but here, it is stillness that often comes first. Likewise the collection ends with reference to the Bible, similarly to the way it began, in the third to last poem ‘One last Pslam before you go to sleep’. But it is perhaps the title poem that is both a start and a stop, allowing the collection to come full circle:

If poetry could take the pain away

it would begin with your last breath;

capture it, re-write, re-verse your life.

I’d be holding you close to my chest

of your lungs being pushed and pressed

to hear one last sweet melody.

Beginning with your last breath is cyclical in nature, and, ultimately, comes back to the fact we have been told one man’s story. A tale of motherhood, music, home and love; of finding out more about yourself, your home and your mother, despite already seemingly knowing all three. However, all stories must come to an end – but here, we see, an end is also a new beginning. 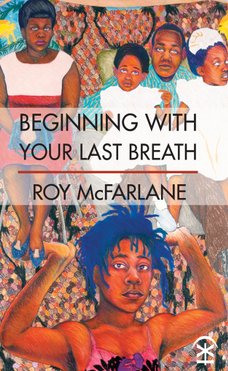 You can buy Beginning With Your Last Breath by Roy McFarlane on the Nine Arches Press Website.