Paying particular attention to the undercurrent of waiting, Assurances (Cape Poetry) navigates an assembly of perspectives and voices affected by the Cold War.

Through what he’s gleaned from his father’s role in maintaining the R. A. F. Airborne Nuclear Deterrent at that time, J. O. Morgan’s work seeks to illuminate the shared space and connections between a world of fractured thoughts. From the bomber pilot who ignores ‘the go-code’ to the otters delving into ‘hidey-holes’, and the prayer of the bomb, questions of accountability are attended to, though never answered concretely.

Instead, linguistic play and a lighter collection of imagery works to tether the complex questions regarding role, responsibility and choice with those kaleidoscopic voices and perspectives harnessed through a succession of fragmentary forms that jump and jolt between shifting perspectives and subjects. There isn’t much assurance at first glance. Assurances is a book-length poem that elucidates itself over each reading but is also enjoyable from the first, as Morgan cuts through the historical weight of the poem and the rigidity of its content with agility in pace, tone and rhythmic patterning to produce something that feels effortlessly light and well worth the formidable take off.

Here’s the opening of the poem:

Born from a need to counteract the threat.
Now that such a threat.
For threats have been made.

Now that the enemy has shown that they.
And having sailed so close.
In having simply sailed.

Through a series of disjointed tercets, Morgan boldly initiates us into the work. Those spaces where words have been dropped from the structural expectations of the syntax encourage the reader’s act of filling-in-the-gaps in these first few stanzas — an antecedent to the contractual nature of engagement between reader and text.

The dropped-word phrases act as formal materialisations of the fragmentary ‘snatches of chatter’ and ‘tatty threads of signal’, which are later hooked through radio frequencies and switched channels. As a means of retention, notice how those abrupt grammatical junctures are quietly generous in rhyme agglomeration. These rhymes cushion the reader through the alienating devices Morgan deploys, yet seeks to counteract.

Or, see how later in the poem sharp shifts in form are softened and yoked via this rhythmic strategy to moderate harsher stylistic decisions, granting the reader that necessary glimpse of reassurance that the poet is still, softly, co-piloting this thing:

the gun, to get in first. To win the war before there is a war.

(There’s no incentive in looking for a reason.
Though such action may at least be reasonable.
And good reason shouldn’t have to be excused.)

And once it’s done it’s done. If the call goes out it can’t be
re-called. That’s one of the basic rules. Can’t have the
bombers yo-yoing.

Here ‘war’ and ‘for’ sensitively link the first and (formally divergent) second stanza with internal rhyme, a chain which continues over to the third stanza with ‘excused’ and ‘rules’. A second set of rhymes is cross-stitched over these between ‘gun’, ‘reason’ and ‘done’, offering a ‘double-encrypted’ and varied rhyme scheme ‘just to be sure’. This assists the reader through a ‘state of uncertainty’ evoked by the formal strangeness, not unlike the bomber pilot in the book who undergoes the perpetual enactment of the ‘military state-of-mind’. Simultaneously defined as one of desensitised ‘familiarity’ and ‘alertness’, that state of mind reflects a mediation between polarities of ultimately knowing and unknowing, representing a wider conceptual consideration in the work:

How close things draw together just to split.
How full an understanding of the ways in which
our worlds may pull apart

And so the poem isn’t so much invested in those polarised points – whether the bomb is dropped or not – as it is with the connecting ‘ever-divergent’ space between those uncertainties. Consequently the poem is also invested in the process towards ‘change through slow agglomeration’ via the inhabitation of that fuzzy territory. As such, Assurances becomes its own meta-text; the poem itself performs uncertainty and heightened tension.

In this explosion of perspectives, even the bomb speaks:

(I will not drag on updraughts.
With my nose I split the air
and sew it up behind me
seamlessly. I tidy as I go,
O my creator)

Gorgeous. And the rhyme and rhythm are not the only devices that sew the work up as they go:

The stanza could well be a metaphor for the entire poem: all the threads knotted with so much depending on their slight fibres and the connections between them.

As it shifts across tercets, prose-like stanzas, parentheses, italicised interjections, couplets, quatrains and more, reading Assurances is like looping over a diverse and changing landscape, whose occasional repetitions provide essential moments of familiarity and recognition. This formal device works to continuously refresh the long poem as it reflects the content in its form: prose poetry for reportage and shorter tercets or couplets for more lyrical moments. This jolts the reader into an uneasy state of awareness just as it feels the patterning of the lines is mellowing out, or that we are mellowing into them:

The decision itself would already.
And it would all be over in a flash.

In any case it just wouldn’t do to be so reliant on automated
missile dumps. Each clutch of them tightly siloed static…

The first two lines of this excerpt signal the end of a series of dropped-word tercets and just as the pace and rhythm of the poem begins to feel remotely comfortable, we switch into fuller sentence constructions which dictate an abrupt change in perspective and pace. This turn comes right after the ‘flash’, where form and content meet in reminding us not ‘to be so reliant on’ automations and routine repetition. There’s an element of Walter Benjamin’s ‘astonishment’ theory bursting through this work. Morgan doesn’t want to console the reader, a move that signals his awareness of the deep impossibility for a comfortable and consolidated linguistic journey through a poem which covers such dense and disconcerting themes.

There is a gamble involved in this work. Long poems run the heightened risk of losing their reader’s attention. So it is an accomplished poet, indeed, who finds their reader safely landed, ready and willing to take off independently at the end. Morgan is one of those poets. 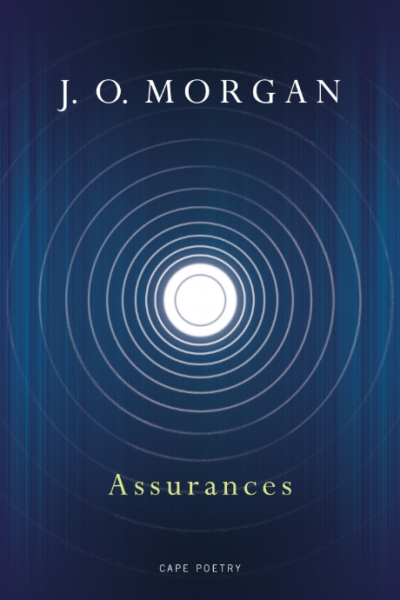 You can find out more about Assurances by J.O. Morgan from Jonathan Cape.

DSC_0479 by Georgina Goodlander. This image has been cropped and filtered.