Home » Blog » Review: ‘An Ocean of Static’ by J.R. Carpenter

In between the billows of foaming brine, tucked away behind stacks of salt, lurks the pearl of a poetic endeavour completely unlike any other. An Ocean of Static (Penned in the Margins) is the debut collection by digital writer J.R. Carpenter, whose cryptic stream of ever-shifting code spectacularly reinvents the seascape.

From the late 15th century onwards, a flurry of voyages were made into the North Atlantic in search of fish and the fabled Northwest passage. After scavenging through the dense archive of these accounts, J.R. Carpenter has spun a stunningly inventive narrative about the sea that flits between facts, fictions and fragments.

The reader is thrust into a thick slush of synonyms from the very first section, aptly entitled ‘Once Upon a Tide’. Carried by a sweeping command over tone and register, ‘[‘good deal’, ‘wee bit’, ‘tad’]’, Carpenter replicates the experience of being ‘engulfed in a textual sea’ and with spectacular conviction.

Both these words and the waves they describe are ‘heavy to the oar’, ‘sluggish and solid’, ‘scarcely penetrable […] the consistency of a / jellyfish’;  they are set on mirroring the meteorological setting.

The rain [‘came down with such rapidity’,
‘fell in such quantities’ ] that every object
was totally obscured

More like walls than waves, Carpenter’s words are ‘a thick and tactile curtain’ and simultaneously ‘a temporal fabric’; they construe poetry as a parallel universe in which everything seems more exciting. In ‘Notes on the Voyage of Owl and Girl’, she flits liberally between various possible dimensions.

The section ‘TRANS.MISSION [A.DIALOGUE]’ feels like it should come with a warning to ‘brace yourself’, or at least to draw breath. In a leap of typographical boldness, the text spills over into the margins and is sucked into the space where the two pages join. The text plays tangible mind tricks, where reading this poem feels like diving into dark murky waters even though you know you can’t swim (‘Begin Transmission.’; +choose(w) +’?’; ‘With a ‘ +choose(question) + ‘.’; […]).

The impenetrability of these codes sometimes conjures a feeling of frustration, but it’s nonetheless a fitting way to convey how ‘The sea mocks our frustrated search’.

As a tribute to treasure hunting, or simply as a gesture of poetic goodwill, Carpenter scatters clues throughout the collection for how a reader may navigate this astonishingly original work.

How do we piece together a story like this one?
____A mystery.
The title offers more questions than answers. […]

The numerous prefaces, complete with a helpful transcript guide for translating the language of code, already inform us that these poems serve as scripts for the live performance of a body of web-based works. But the underlying purpose to this unique approach only truly becomes clear in the preface to ‘Ten Short Talks About Islands… and by Islands I mean paragraphs’.

Navigating this space (with track pad, touch screen, mouse, or arrow
keys) reveals that this sea is dotted with islands […] fluid paragraphs

She goes on to say that each of these textual islands represents a topic (pointing out the etymological origins of topos, meaning place) where each paragraph separates the narrative body from ‘the referential mainland’. This poetic mapping lends itself to a ‘reading and re-reading and writing and re-writing’ so liberal that the sky, quite literally, represents the only limit.

In this constantly shifting sea of variable
texts a reader will never wash ashore on the same island
twice… and by islands, I really do mean paragraphs.

Carpenter not only cultivates an impressive sense of self-reflection, evidenced by these prefaces of thoughtful speculation, but also casts a playfully cynical eye upon poetic exploration itself, highlighting the ‘dubious [‘accuracy’, ‘origin’, ‘usefulness’]’ of her own words.

Through the act of looking the [‘writer’, ‘travel writer’,
‘geographer’, ‘naturalist’, ‘survivalist’, ‘tourist’]
[‘describes’, ‘objectifies’, ‘classifies’, ‘mystifies’,
‘tells a story of’, ‘searches for’, ‘appropriates’,
‘equates with the desire to possess’, ‘possesses’,
‘invents’]

Ultimately, these cryptic poems strive to prove how ‘This watery planet can still keep secrets from us’. Indeed, as we fumble among the fraying cords and soldered wires, there’s the lingering hope that we just might be tapping into the mystical unknown; a rumour that references how Marconi believed his radio signals would pick up the sounds of sailors drowned in the Atlantic. Not dissimilar from the way ‘The ether [‘beckoned explorers to navigate its unfathomable depths’], these intrepid poems demand persistence in reading but eventually reward it.

Admittedly, the reader must be nimble-minded to leap between these parallel realms, for it’s a challenging feat. As the poet concedes herself, ‘This story keeps shifting’. But as she conjures up the childish delight of imaginative free reign, it’s a sure fact that seasickness has never  been so thrilling. 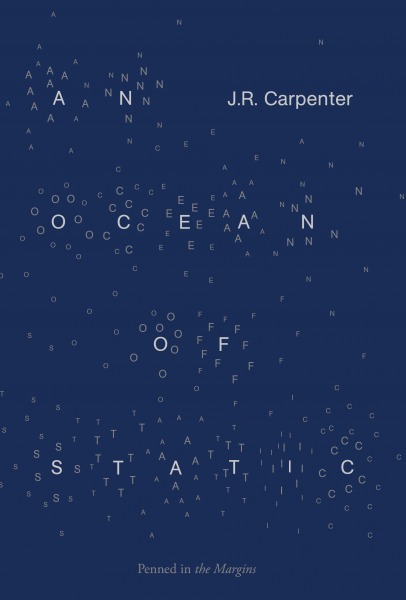 You can buy An Ocean of Static from Penned in the Margins.

Herschel’s view of the Taurus molecular cloud by European Space Agency. License. This image has been cropped and a filter has been used.