The title of Paul Deaton’s powerful first full collection, A Watchful Astronomy, might strike the reader initially as something of a tautology – surely all astronomy is about keeping a vigilant eye trained on the night sky? Deaton’s approach is to look down the other end of the telescope at the minutiae of our earthly lives.

Deaton is no anorak or hobbyist – star-gazing is altogether more than this for him, providing him with a language and an objective correlative all of us can at least relate to, if not speak. He is in many ways an anthropological astronomer, with his eyeglass trained firmly on the terrestrial realm. Rarely does a poet give the book title away in the first poem, but here it seems to act as a sextant for the rest of the collection:

after some party drinks, Orion splayed

above St Paul’s Church like a fat limbed gingerbread man,

and that star, cold as quartz, your watchful astronomy

tells you isn’t a star but giant Jupiter, up there,

the same size as the stone in your shoe.

Here, Jupiter becomes the size and significance of a stone stuck in a shoe. In such a way, micro, quotidian events take on a macro and cosmic importance, a nice play on the much-used trope of looking at the night sky and feeling dwarfed into insignificance by it.

Most of Deaton’s poems, unless they are celebrations of the wonders of nature, have a tone of elegiac anger, but controlled by the neatness and metre of the structure of the poems themselves. Deaton pays such acute and penetrating attention to the details of the circadian rhythms of lives because there seems to be a sense that his own upbringing was lost in a haze of routine. In ‘Stress’, Deaton that reminds us of what happens when the routines of life distract us from looking at anything other than the flat, domestic, and sometimes existential, rut we are in:

Where we lived there was no great escape;

our lives were sealed by planner’s tarmac,

In the terraced suburbs we were met with unplaceable sunsets.

We forgot the earth is round.

Like the opening poem, the speaker finds their voice after the event, after the party or after the death of a family member. The childhood presented in these poems is not one of Dickensian horror or squalor, but it nonetheless has the air of a wasted opportunity. Often presented as a glacial erratic, a large boulder dumped in the landscape, the figure of a taciturn father, whose work-related stress dictated the lives of the rest of the family, looms large over the poems:

Not much a father more a wounded bear:

shackled to work, the mortgage, a nudging wife, suburban rooms.

He mauled us with his gloom

and we never did learn what had truly stung him.

Impenetrable as a forest and as silent.

Quick to bring to the boil.

In fact, the majority of the poems return to a father figure who is in some way stifling happy family life as it should be and this filters into others that are not directly about him. The speaker looks at the surface gloss of a photo of himself as a toddler and is not convinced by the image it portrays. This gives the poems an edginess, an unease often leading to startling denouements, like the ‘self-portrait aged 2½’ in ‘In Front of the Rock Garden’ that ends with the unforgettable image: ‘Behind my back my hands / twisting each wrist in Chinese burns’. The veneer of any given image or story is not to be trusted, such as the speaker’s mother in ‘Polish’ who devotes so much of her time to looking immaculate:

Though I know well and it’s possible to tell

from her stripped cuticles,

that there’s some fretful paddling,

panicked flapping beneath her glide,

that polished out shiny side.

The father figure robs the family of words and articulation. In ‘Shoemaker Father’ he’s presented as a man of small deeds and no words: ‘How could you mend so many things: shoes, carpets, / leather belts, bags, wallets, while the family fell apart’. When asked for his assessment of a novel, he merely shrugs and claims it’s ‘alright’ in ‘Books’. In ‘Call’, the last time father and son communicate before an operation which leads to the father’s death, it is in fact the hurt and alienated son who finds himself without words:

‘Look after mum,’ he intones, dry as a bone.

That’s it, more or less, no other words.

I’m on the phone but I look away.

He never did make Christmas day.

As such, A Watchful Astronomy becomes a painful and poignant attempt to restore eloquence and salvage a narrative that the poet can live with. The collection also serves as a salutary warning not to become blind to things and to remain wakeful but also to become a participant, not a passive bystander. There is already a sense that something has passed that cannot be saved in his warm but powerless relationship with his mother, such as their failure to understand each other in ‘Words’ and the hollow gesture of making a cake together ‘three decades late’ in ‘Cake’. However, the quiet despair that moves to many of these poems is not the only tone struck by the collection and the poet finds many things in life that are redeeming – the creative effort of writing, running, love and fatherhood. There is also the solace that nature offers the poet, in poems like ‘Loch Broom’ which, I’m sure, would have even inspired some envy in Norman MacCaig:

There is a sense in the slowness that not one tree

didn’t sleep well. That even the land hit

the button of deep sleep, and wiped the past clean.

Finally, and on a more superficially technical level, it has to be stressed how startling and strong the use of imagery is in this collection. Deaton’s gift for a stellar trope is perhaps also, bizarrely, grounds for criticism, because the poems where he really delivers an image so perfectly captured are poems remembered mainly for that image and not their content. Take, for instance, the breath-taking conceit of the opening stanza of ‘Estuary Winds’:

The earth and sky suggest

everything has gone into

This stanza is so outstanding, it could be its own poem.

We have to be grateful for Deaton’s luminous originality. A Watchful Astronomy is such an unclouded, moving and accessible collection it should be prescribed by the NHS for those who say they cannot stomach poetry because it’s too difficult or irrelevant. 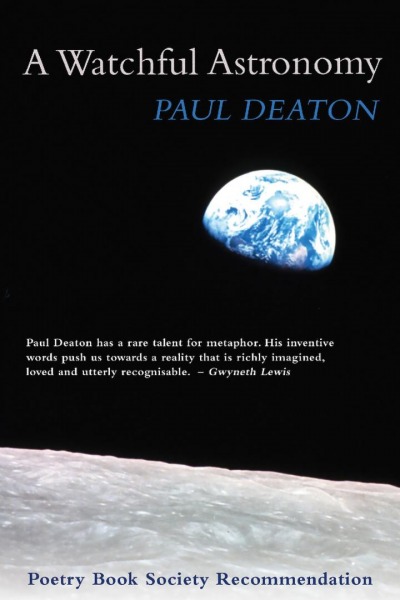 You can buy A Watchful Astronomy from the Seren website.