What is it that makes poetry special, different, or unique? What makes a poet important? The answer must lie somewhere beyond form or subject – beyond, that is to say, anything I am able to mention here.

The poems in White Hills (Clinic) have been described as ‘weirdly beautiful’, possessed of a ‘strange grandeur’. These attempts at description are intended as compliments, but their evasiveness does Stopa-Hunt’s achievement an injustice. The over-riding theme of the pamphlet is something we should be able to name: disease, decay and, ultimately, death. If those subjects are made ‘strange’ here it is because, firstly, the poems are so familiar with them and, secondly, they are presented as beautiful.

Nowhere is this any of this clearer than in the two-part title poem, which takes places among the eponymous white hills, an imagined landscape which calls to mind Eliot’s ‘dreamcrossed twilight between birth and dying’:

Across white hills the dying walk,

In their ivory shoes, with hands full of bracken –

If you meet them by chance.

The place is Stopa-Hunt’s own, but it’s redolent of English poet A. E. Housman’s ‘blue remembered-hills’. In fact, Housman haunts the pamphlet: from the typesetting (brief lyrics and indented lines) to the close, almost conspiratorial relationship with death, to the perennial grey dusk; in Stopa Hunt’s white hills, as in Housman’s Shropshire, the sun is always just about to set. There are even quiet echoes of Housman’s sing-song lyricism. The rhyme in ‘Drowned Boys’ made me draw breath:

Through the river for drowned boys.

The storm divides your orange hair,

And your scalp is an empty bed.

In battledress or pince-nez, one by one,

You pull them out of there.

And then there are the flowers. White Hills is scattered with an idiosyncratic, wunderkammer vocabulary, from ‘ivory shoes’ and ‘hands full of bracken’ to the ‘pince-nez’ of the previous poem. Flowers are especially prominent, even making it onto the cover, from poppies to tulips, camomile and Houseman’s cherry tree. This is not a gimmick: the point of flowers is that they are beautiful and short-lived. There is also a cultural resonance: George Orwell once argued that the love of flowers is ‘a minor English trait’.

But there is nothing precious about Stopa-Hunt’s language, least not in the affected sense: alongside flowers we find a whole host terms from pathology – ‘phthsis’, ‘the germ’, ‘lip-wet curatives’, ‘sepsis’ and ‘antiseptic’. There is an awful sense of foreboding in poems like ‘Night Visit’, in which the poet sits in a candlelit bedroom ‘counting the seconds like money’ as unidentified visitors (naked, except for red flowers in their hair) roam through the house. It would be a mistake, too, to think that Stopa-Hunt is writing in miniature. At times, the imagery is sweeping and surreal. In ‘Silver Boat’ she traps an intense, epic vision within a precise, restrained form that recalls Sylvia Plath’s Ariel poems. The suggestion of a failed journey, sleep, or burial, is characteristic:

I lie down in

The hum of ash

dry as a Mass.

In fact, perhaps the most astounding quality of White Hills is the range of tones Stopa-Hunt is able to deploy: as well as the lyrical and the precise, the voice is alternately commanding, mythical, conversational and intimate – often within a single poem. For instance, the second part of the ‘White Hills’ begins by directly addressing the reader’s future:

You will walk there. One day, you’ll look

Down and see your carved white shoes.

You’ll find yourself carrying everything, too.

The firm second person mode is almost prophetic, but made personal and believable by the repetition of soft sounds – ‘y’s, ‘w’s and ‘u’s – as well as the half-rhymes which run through the whole verse: ‘white’ ‘find’, ‘ring’, ‘mind’ ‘rind’, or ‘one’, ‘down’ and ‘lemon’.

There is even a found poem, composed of sentences picked from a foreign language app. Stopa-Hunt’s is titled ‘Vox populi’ (‘voice of the people’), presumably with a knowing wink…

Sometimes I hear my father who sings in the garden –

I see tears in your eyes.

If it works, then it is good.

The secret to a found poem is what gets found: the form allows Stopa-Hunt to sneak in a greater quantity of direct, open phrases than modern lyrical prudence would usually allow. The result is oddly comforting, as the arbitrary often is. There’s real art here, too. For one thing, the poet has to arrange the rhythm and line length. In ‘Vox populi’ the phrases also make references to the pamphlet’s main themes, and as well as to the poem itself (‘If it works, then it is good.’)

White Hills covers an astonishing amount of ground for such a small pamphlet, while always staying face to face with it subject almost to the point of being unbearable. The sheer variety of tones stands in stark contrast the recent fashion for scrubbing away intonation in pursuit of flat, studiously ambiguous lyrics. It’s rare, too, for a young poet to create the kind of associations with old masters that Stopa-Hunt does so naturally.

By natural, I don’t mean easy: the poems here suggest a vast hinterland of private reflection, that place where literature and experience come together to create a personal art. Arguably, it’s the ability to speak from within this place that is at the heart of the question I began the review with. You can call this a ‘strange grandeur’ if you like; a better word might be – authority. 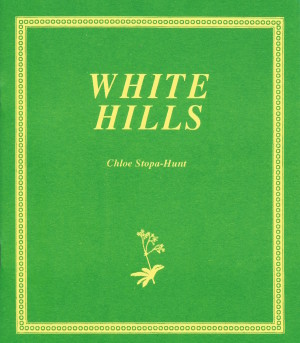 You can buy White Hills from the Clinic website.

Re: Reviews are a new initiative from the Poetry School, re-visiting titles published last year that were overlooked at the time. We invite (and pay) emerging poetry reviewers to focus their critical skills on the small press, pamphlet and indie publications that excite us the most. If you’d like to review us or submit your publications for review, contact Will Barrett at – [email protected].