Home » Blog » Review: ‘Pamper Me To Hell & Back’ by Hera Lindsay Bird

The review of Hera Lindsay Bird’s pamphlet Pamper Me To Hell & Back that I’d really like to write, my ideal review, would be a long list of the poems’ flaws and failings, a whole bunch of intellectual and even occasionally personal criticism, and then at the end there’d be a very large, badly lit and uncomfortably close-up picture of me reading the pamphlet, grinning crookedly as the tears ran down my face.

I want to write the review like that because Bird’s poems are infectious. Part of that infectiousness comes from their strikingly idiomatic style, characterised by several traits: an informality informal to the point of ritual; short to mid-length declarative sentences, stripped of any formal expression of the strong feelings they describe; a conspicuous lack of lyricism; the deadpanning of great misery and joy. There’s constant reference to the words’ status as poetry, and to what poetry does and is. There’s a mix of scatological and sexual events alongside an ensemble cast of pop culture references. And yet… the goal is the same as Keats’, the same as Sappho’s: love, flowers, melancholy, sex, money, death. Fame, the moon, meaninglessness.

So what’s the difference? Well, where historically poets have refined their language towards poetic diction and metre – and risked being programmatic and melodically repetitive as a result – Bird refines her language towards an imitation of vernacular usage. In this case it’s the vernacular of web-drenched millenials, and the equivalent risk is of being banal, trivial, boring. But Bird is never those things, in the same way Tennyson is never drily metrical.

The other striking formal features are the barrage of similes and the frequent ellipses – both taken straight out of the poems of Chelsey Minnis. I don’t think Bird would be shy about the fact (the long final poem in her collection Hera Lindsay Bird is ‘after Chelsey Minnis’); it’s egregious copying, but not really more egregious than Michael Hofmann’s copying off Robert Lowell, or the endless army of young white men copycatting either Seamus Heaney or John Ashbery.

Here’s a passage from ‘Speech Time’:

Or like sexily cleaning the coliseum with a black feather duster

It’s like panicking because your castle is too beautiful

Or an advent calendar for atheists full of empty windows

It’s like pouring cold champagne all over your thighs

Or an evil piano that can only be played at midnight

A poem should never be a tourniquet

You have to let the blood goes where it wants

That’s a thirty-seven dot ellipsis, by the way, I counted. Like a professional.

Pamper Me to Hell & Back has plenty of passages like this. The sheer reach and imaginative variety is striking, but… is that variety part of any form? First of all, what’s the ‘it’ referring to here? Presumably, in this context, the way that ‘speech time’ (figured here as the rhetorical alternative to poetry’s aesthetic function) and ‘poem time’ have become confused: like the soldier showing up at the wrong war, as if Bird was pretending to fight for poetry but was actually fighting for speech. Or the other way round. Probably the other way round.

Anyway, so you can read Bird’s similes like that, and sometimes it pays off…

(That is, she’s capable of dazzling intellectual/emotional connections which, in the best Stevensian tradition, resist the understanding almost successfully. Like when a narrator imagines having broken up with her current partner, and says ‘You’re there in my memory […] like a field of blossoms in an air freshener commercial / sarcastic with light’. Isn’t that fantastic? The blossom is a symbol of beauty, but this blossom is abased by being in a commercial which isn’t even for the blossom, but for a chemical substitute for that blossom. The very light which makes the blossom visible also renders it sarcastic, bitter and mean. And that’s what it’s like to imagine remembering a person you’re in love with from the imaginary vantage of just post-breakup. Yes.)

… but most of the time, it doesn’t really.

This poetry neither needs nor wants to venerate the manufacture of apt metaphysical equivalences. Rather, it wants to make a kind of metaphorical soup – with a bunch of tenors and a bunch of vehicles swilling around, bumping into each other with little clangs of humour or insight – by force of density more than precision. More than anything, it’s a rejection of the standard poetic move to grand revelation, to spiritual pomp. After discussing the stupidity of pyramid schemes in ‘Pyramid scheme’, we get ‘although if you ask me banks are the real pyramid schemes after all / or was love the real pyramid scheme? I can’t remember’. The grand austere aha! of hyper-refined poetic structure is a piñata Bird smashes to collect the cheap delicious candy inside. We see the same mockery regarding the abandon of being in love when Bird writes

for some reason, you have to think of the wild west all the time

but it doesn’t make any sense???

because you don’t really care about the wild west!!!

Look at how ludicrous it is to be serious about any of this, the poem thinks. If poetic craft in Bird’s work is bent towards mimicking internet-mediated contemporary language, then one of its significant achievements is capturing a kind of cognitive dissonance at which our generation is supremely accomplished. That is, the ability to make a statement and to both mean it very deeply while simultaneously holding it up as an object of mockery. It’s an escape route from the poetic dead-end of ironic saturation, because it isn’t a total destruction of the ability to be serious. It’s both serious and silly, both genuine and ironic. Bird’s found a way of having her cake and eating it.

Often in these poems humour acts as a cover for heartbreak; silliness becomes moving. The closest Bird has to an ars poetica comes up in ‘I knew I loved you when you showed me your Minecraft world’:

it is just – there are some things which cannot be said

and some feelings which, if articulated too early

and forced towards the surface go blind

& it’s better to hold them off, or wait them out

becomes impossible to hold back

and articulates itself within the body

So although the poems on the surface might attack the idea of ideology – ‘People are always on the lookout for new ideologies with which to punish themselves’ – really there’s plenty of belief here. When Bird writes ‘Every year people demand to know what art is feminist and what art is un-feminist / Sometimes I wonder if it’s ethical to be a woman at all’ it doesn’t register as an attack on feminism, but rather an attack on the hierarchical, top-down pronouncements of any feminist authority. It’s an attack on grand structures of thought, and a small act of support for the beleaguered, idiosyncratic self, doing its best: ‘Sometimes you just want to wash iceberg lettuce in quiet despair / It’s like buying a second wig, and putting in on over the wig you’re already wearing.’

So one recurring theme in Pamper Me to Hell & Back is the primacy of feeling over the narratives we clumsily construct with those feelings. ‘pain is just boredom with the stars turned up’ she writes at one point. Elsewhere,

i used to think pain was meaningful

i no longer think pain is meaningful

i never learned anything good from being unhappy

i never learned anything good from being happy either

it has nothing to do with anything

but i feel it down in the corners of my sarcophagus

This is a poetry against easy narrative, pretence, the grand pronouncements of Authority. It just so happens that the tools she has at her disposal are those of easy narrative, pretence and the grand pronouncements of the individual. And it’s the sense that she’s attempting to use the master’s tools to dismantle the master’s house that keeps these poems tense, expressive, moving – rather than just fun. Although they are fun

One interesting development in this pamphlet from 2016’s Hera Lindsay Bird is this: when a line of poetry is too long for the page, convention is to indent the remaining, dropped part of the line, to signify that it’s part of the preceding ‘line’ – for most of this pamphlet, though, that convention is ignored, and run-over lines remain flush to their margins. Although it’s possible that the typesetter at smith|doorstop just ballsed up, I think it makes sense as a strategy. The impression is that Bird is pushing further along her challenge to the rules and regulations of lyric poetry, preferring the prose convention of lineation rather than the poetic standard (Emily Berry uses the same trick in her recent Stranger, Baby), just as her rhythms are those of Whatsapp rather than the lyric cadance we associate with canonical poetry. Bird’s tipping over a little more of the applecart with each outing.

Pamper Me to Hell & Back is like a bunch of Romantic poets and Stoic philosophers got into a fight at the clown school they’d accidentally joined. Imagine again that picture of me, Joey Connolly, laughing and crying. Long live the funny gothic juggling of Hera Lindsay Bird. 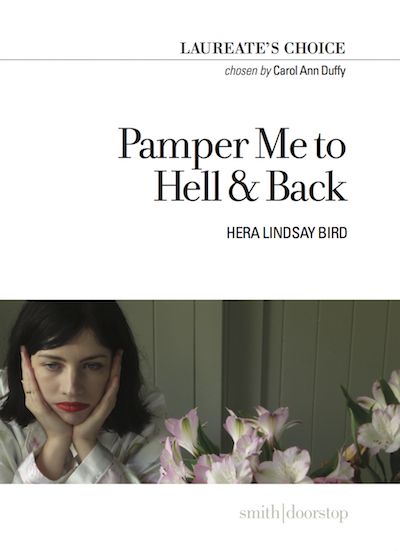 You can order Pamper Me to Hell & Back through the Poetry Business website.