John Ebersole’s late 2017 Tourniquet review of Calling a Wolf a Wolf  is harsh. Even when he’s trying to compliment Akbar’s work, it’s backhanded – as in the opening of his review where we read:

Dumbfoundedly imaginative and self-absorbed, [Akbar’s] poetry engulfs the reader with so much turbulent rhetoric you’re surprised he’s capable of writing a poem as unwavering as “Learning to Pray”

In a way, Ebersole isn’t wrong: Calling a Wolf a Wolf is certainly all about Akbar. It’s hard to find a review or blurb of this book that doesn’t mention the poet’s struggles with alcoholism, recovery, religion or sexuality. Even a cursory pass of the book quickly reveals most of the biographical features that hover around Akbar’s name in the press: his Iranian-American status (‘Do you Speak Persian?); his alcoholism (several poems are variations on ‘Portrait of the Alcoholic with…’); piety (the second word of the book is ‘God’); his recovery from alcoholism (most bluntly in the poem entitled ‘Recovery’) – all this and a good dose of meaty, embodied sensuality (we read a lot about blood and mouths and throats) could be read as ‘engulfing’ Akbar’s debut collection.

Yes, there is much made in this collection about trauma, grime, addiction, sex, and higher powers, and yes, an ungenerous reading might be able to accuse Akbar of self-indulgent, maudlin soul-baring and navel-gazing (Ebersole uses the clinical term ’narcissism’), but in spite of the consistent attention to ‘himself’, I find it difficult to feel the same way as Ebersole does. Akbar’s depth of reading, craft, and imagery, coupled with sometimes astonishing metaphors and twists of language do the very important work of poetry in terms of catalysing empathy and revelation without being ‘showy’ and unsexily ‘revealing’ – or, as the poet puts it: ‘the moon unpeels itself without affectation’. To encounter this book along the lines Ebersole draws misses an important part of the value of Calling a Wolf a Wolf.

Some of that value emerges in a poem like ‘Desunt Nonnulla’ (Latin for ‘falling short’). Here, I find a lovely meditation on language:

still unsmogged by its station          I walked learning

the names of things each new title a tiny seizure

of joy     paleontologist tarpaper marshmallow  I polished them like trophies

eager in delight and color-blind      though I still loved crayons

for their names cerulean gunmetal and corn-

Even my dry and desiccated ‘soul’ can remember the ‘tiny seizure’ of joy in the act of reading itself. There’s a palpable sense of linguistic fun in this poem – a reclaiming of the sheer miracle that happens when a word comes close to (but of course falls a bit short of) capturing a concept. Akbar understands this, and writes at the end of the same poem:

such erasing makes one voracious  if you teach me something

beautiful          I will name it quickly before it floats away

Calling a Wolf a Wolf overflows with beauty. ‘Orchids are Sprouting from the Floorboards’ feels like a textual version of a Kehinde Wiley painting, even as it elegizes a lost friend. In ‘Everything that Moves is Alive and a Threat – A Reminder’, Akbar compares his apology to ‘a belled cat’s/ frustrated hunt, my offer to improve myself/ was ruined by the sound it made’. Here, the poet is pushing the reader to a very interesting point. I can think of no better evocation of earnest intent stymied by speech – and it’s the pause caused by the word ‘belled’ (to en-bell?) that creates the refreshed readerly space in which to encounter Akbar’s poems.

Akbar finds plenitude in the effervescent (‘the average/cumulus cloud weighing as much as eighty elephants’), and can turn commonplaces into surprises with phrasing alone (‘I am dying at an average pace’ and ‘envy is the only deadly sin that’s no fun for the sinner’). And in ‘Drinkaware Self-Report’, he practically (concretely, even) builds his stairway to heaven, through his art:

What comes from reading Calling a Wolf a Wolf might be a particular knowledge the ex-addict has earned – that there is always more. More words, more poems, more beauty, more feeling and more joy. There’s more art, so much more that it threatens to ‘engulf’ us in its ‘gold light’ and make us part of itself.

In a way, I think the collection asks: why not go overboard with language? why shouldn’t a poem be unrestrained, unmoored, transcendent? I certainly can’t see why not. 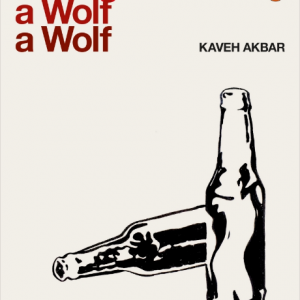 You can buy Calling a Wolf a Wolf  from Penguin here.

Nasser Hussain is a Lecturer in Literature and Creative Writing at Leeds Beckett University. His next book, SKY WRI TEI NGS (a book composed entirely from IATA airport codes) will be published with Coach House Books (Toronto) in the autumn of 2018.

‘Gold’ by Audrey. This image has been cropped and filtered.