A landscape of stone has never been so alive as in Sean Borodale’s Asylum (Penguin): freckled with bones that refute their own burial, and feed off ‘the flesh of the shade’ as though trying to grow back their bodies, these poems are brimming with life in unexpected places.

The inspiration for this book was mined deep within the caves and quarries of the Mendip Hills in Somerset, and, like Borodale’s previous two books, Bee Journal and Human Work, Asylum was written  live on-site:

to be alone,
with the population of collapsing drips
as they flash apart;
with no sight, no hearing, no shallow breath

Each poem is sculpted in the shadow of a geological and archaeological history that stretches back to the late Bronze Age, with no fewer than twenty Palaeolithic sites to its name. But this unusual technique has cultivated a collection that is raw as well as rich in historical reflection, the gems of its narrative carefully exhumed whilst still conveying a split-second urgency and spontaneity:

Nearly impossible to say what I look for,
walking fast through trees, […]

How can speech be unlaboured;
a single word issue
at the rate of stone, out of rock

Borodale classifies his writing as ‘documentary poems’, and from recording his response to finding a fossilised fern, to chronicling the challenges of a hob-nailed boot released from silts in the Upper Mells Stream, the cinematic focus in this collection is wide-ranging. The live streaming is particularly thrilled by darkness, investigating its effect on the voice for 30 minutes at Goatchurch Cavern:

I bring fear of the dark,
a length of rope, and abject desire. […]

I strike a match – lightening the dark sound. […]

It is not far away.

Despite the documentary ideals, a curious image of reality creeps into focus. Blinding his way into the black pits of the earth, such as ‘the troubled landscape of hollows’ at Grebe Swallet Lead Mine, the poet lends a muscular quality to the presence and absence of light. Its material becomes meat-like; ‘lean’ as in the poem ‘Singing River Mine’:

The idea of materiality is masterfully produced — a rarity for repeat manufacture. A more subtle example comes to the fore when the skeletal elements of a woman surface from a grave-plot at Stanton Drew:

Glancing back: they could not have foreseen
the wash of her litter; bones like wave-spume
drifting up discharged and naked,
like anthers of flowers.

But really, the plotting of ‘her post-self’s inner furniture […] teeth that still shine’ leads towards a final image that focuses on the graveyard roots skewering ‘the flesh of the shade’. The bones are fixed together as by sinews, knitting back the proof of their bodies (‘Furies who do not decompose / but interact, as bodies matting’).

The muscular darkness lingers as a living, breathing menace, pressing its mass against the page like a palpable tumour. But this ‘black tent of shade’ also brings comfort to the ‘Bones, loved or not’,  tucking them away safely from the threat of their former selves.

Light is not the only phenomenon to gain material conviction, as the linguistic universe gains texture too:

Names of people fall with the quarry rock,
gathering a woollen dust about their moisture

Elsewhere, an ‘echo frays’ around the fringes, and whilst the dead voices of ancient ghosts are shelved out of sight to the ‘seizured turmoil of tumbling sludge’, they dig themselves back up like worms:

The whole yard is lifting its burial;
the sun
hinging its inhumations
into the spill of the everyday.

Ultimately, the materiality of light and language serves as set décor for what is acknowledged as ‘The Mendip as a stage for acts of writing’. Each page is a performance, a ‘diagrammatic experience’ that choreographs a spectacular ‘discipline of decline’:

This is a wide theatre,
thirty miles long.

It dips down at one end
and I can visualise its boreholes
like cast-moulds for bronzes,
scattered at points quite buried.

The notion of ‘The Mendip as a stage’ is highlighted throughout by the italicised stage directions (‘This could be a woman’s glass cup [picking it up], / the wine of her sanctuary’). But whilst the stage is ‘drawn in the three dimensions’, the usual tensile consistency of time is stretched taut:

Time not as we know it;
but another time quite skilled in losing things.

Like the lack of temporal order, these poems rarely commit to the confines of structure (except for ‘Aveline’s Hole’, ‘Sump I’ and ‘Shatter Cave’, whose triadic repetition is similar to ‘Singing River Mine’). The poems prefer to mine the transformative potential of poetry-in-motion, and such a style is fitting given that not one corpse to have graced this ground has shown commitment to its coffin:

the same marked plots
which have erupted their principle of eternal sleep,
risen as flamed out of burial and gone awry,
wreaking jigsaws of havoc.

The brief order of a corpse
stapled in with sods and soil weight.

[…] Teeth and vertebrae on tumbled-up soil;

There is some guidance to be found in the interweaving of poetic thought, as certain lines routinely weave in and out, losing their thread, before resurfacing to even the poet’s surprise. ‘Nothing has come here / that is more than flicker, / that has not brought / the bright, hurt language of its sun’. Another line that echoes across poems is ‘pressing the voice / back into the blackness of the throat’.

But the pivotal idea that seeps through these stalactite poems – tossing the reader to the tidal whim of ‘wave-spume’ bones as they break their silence upon the earth, spontaneous and apparently stream-of-conscious – is that you’re only lost if you turn back, and getting lost in this landscape is half-the fun anyway, learning to ‘blind’ one’s way out. 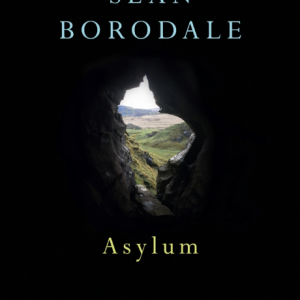 You can find out more about Asylum from Penguin.

Jade Cuttle graduated from the University of Cambridge with a first in Modern & Medieval Languages & Literature (French & Russian). She has written for The Guardian, Observer, The Sunday Times, MPT, Magma, PBS and Sabotage. After winning first place in the BBC Proms poetry competition, she’s been commissioned for other BBC podcasts such as celebrating Shakespeare’s 400th. She was a Poet-in-Residence for Ilkley Literature Festival 2017 with Daljit Nagra and is a 2018 Ledbury Poetry Festival Emerging Poetry Critic.

Amphitheater by Matthew Robinson. This image has been filtered and cropped.