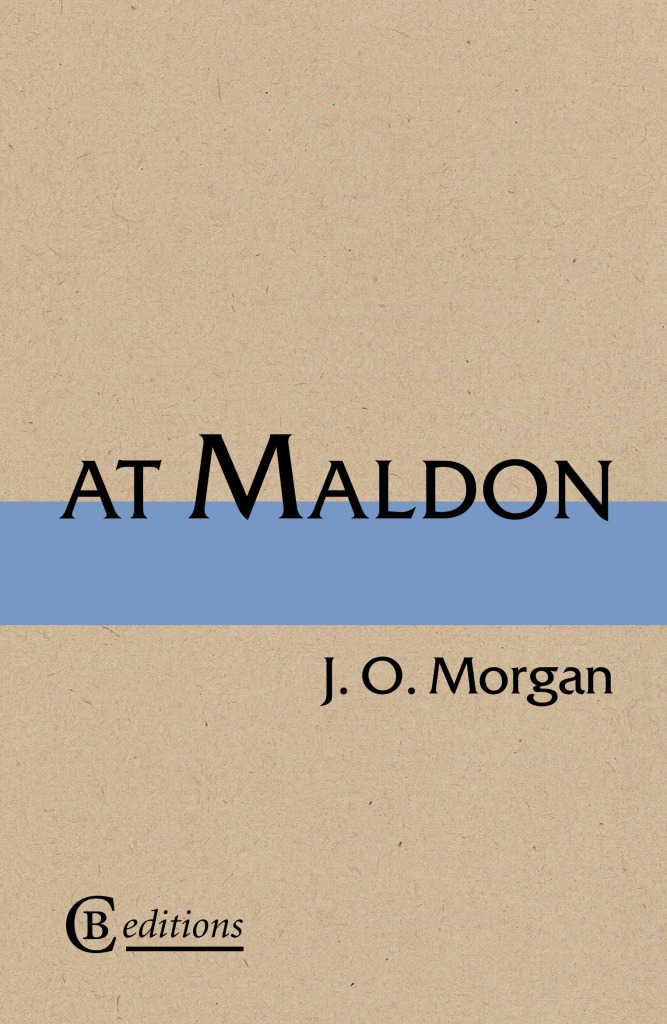 J O Morgan has confronted history in the form of the Battle of Maldon. It`s a real event that occurred in 991 AD, a battle between Anglo-Saxons led by Byrhtnoth the earldoman or local military leader and a Viking invasion horde led by Olaf Tryggvason a Viking prince. It took place near Northey Island a tidal mudflat on the River Blackwater in Essex.

Beyond that we know little about the event except for the detail contained in an ancient poem, missing its beginning and ending, over 325 lines of Anglo-Saxon verse. The poem has been translated many times and its theme and purpose, the accuracy of the details, even the precise location of the battle has been a subject for controversy ever since. J O Morgan has not attempted a translation but has attempted what he calls a re-interpretation of the poem. In this task he has tried to make the poem come to life for contemporary readers, but not in the sense of some quaint heritage re-enactment. Rather he has tried to see the events as if through the eyes of a modern observer who might have been transported to the scene and who had written his own poem based on what he saw. In At Maldon contemporary features of life provide modern imagery that blends with the observed reality of 10th Century Anglo-Saxon England.

This might seem like a license for anachronism but as Geoffrey Hill showed in Mercian Hymns the poet does not have to behave like an academic historian. She/he is creating a poetic reality that can only be judged by the degree that it convinces us in poetic terms. In the first page of At Maldon we find this:

Let the smiling circle of your shield
be the only face they fix upon.
Let it twirl before you,
a bright umbrella dazzling,
for you to strike unnoticed from its rear.

The image of the umbrella is used again by our observer to describe the Viking ships:

Behind the furled umbrellas of their boats
parked neatly in a row,
high noses buried into ryegrass,
mooring ropes slung loose round cracked trees.

This imagery is anachronistic in a sense, I know of no records of Saxons or Vikings carrying umbrellas. Yet it works because it allows the contemporary observer to use imagery that she/he understands as she moves back in time to observe the unfolding tragedy of the battle. This imagery is absorbable by the contemporary reader. The scene becomes real in a way that is more intense than reading a literal translation of the Anglo-Saxon words, which tend to exclude the modern reader.

We are thus given access in At Maldon to the essential structure and mood of the traditional story. This consists of the meeting of the two sides on the river banks and mudflats, the parley, the early skirmishes, the Anglo-Saxon heroic or foolish concession to the Vikings to allow them to cross the brook and fight on equal ground. From this follows the battle and the death of Byrhtnoth, the loss of nerve and cowardice of some of his men and the final heroic rallying of other warriors in a final hand to hand death struggle.

Morgan`s technique illuminates and animates the structure of the story at all points. For instance Godric, the groom in charge of Byrhtnoth`s horse, who leaves the battlefield and precipitates a partial flight of the Anglo Saxons, is described in a more nuanced and ambiguous way than a mere disloyal coward who should have in all honour died with his lord:

And Godric sweats his life into his job.
And Godric marries, loves, tries fatherhood.

And his grandchildren crowd him,
try to dig out his account of the battle.

`Oh yes, I was there too.
I played my part
the day the Danemen came.`

And the nurse brings his food tray,
empties the bedpan, changes the sheets.

`Not my role to join in,
yet many men
owe their long lives to me.`

And the graveyard is packed out with silent spectators.
And his coffin is lowered.
And dirt is kicked into the hole.

It is not only Morgan`s exceptional re-interpretive technique that grips us in this work. Morgan has a brilliant imagination and this inspires some breathtakingly fine writing. Here the skirmishes between the two sides begins:

A sample-arrow, floated over trees,
a black scratch on the air
wobbled by the heavy breeze;
and a circular patch of men erect a temporary roof
to catch the bright barb as it falls.

The scavengers of the killing fields wait in anticipation:

It begins with crows,
black flecks against the blue,
like bits of bin-liner flapping in the wind;
like a mould spreading over the sky.
Two hundred pearl black eyes,
black tongues in black beaks,
waiting for me to be meat.

At a decisive moment the Anglo-Saxon formation is breached:

So the battle line is broken
So the shield defence is shattered.
And like a bun of consecrated bread
the army tears in two.

Leofsunu goes into battle like many other courageous Saxons:

–as he skips and twirls into the fray
a spear extending in each hand,
a grey whirr of blades like a blender on full;
so his foes are chopped and spun aside,
flung from the merry-go-round.

——-the hushed librarian;
who`s reinforced his coat with hardback books;
who`s given up his date stamp,
left behind his abecediarised displays;
exchanged the vicious cut of paper
for the hand-cupped whisper of the sword;
his pacifism put on hold to join in
with the throng.

The dead join the earth and memory in this fine meditation on battlefield death:

As vegetation rots and is compressed
through lapsed millennia
by successive layerings of decay,
till all its goodness is squeezed out
and it blackens as it flattens into coal,
so bodies freshly fallen are packed down.
Beginning as an awkward bumpy cover for the grass
they soon become new ground.
Nestled so close identities are lost,
their limbs all locked,
their blended bloods:
an indiscriminate plateau.
The intermittent strata of the dead
through which the patter of the world above
vibrates so softly,
many dainty feet,
sending messages of comfort, to remind
that they are not wholly forgotten,
that they will be joined before long.

This could be an epitaph or an epigram for this whole work. The dead are indeed recovered here, their memory not entirely lost. In a year when remembrance is with us all, this beautiful passage, about an event that happened on British soil a thousand years ago, has deep resonance.

I hope I have given you flavour enough of this extraordinary feat of writing and re-creation. I cannot recommend this book too highly.

At Maldon by J O Morgan is published by CB editions.