The Immigration Handbook collects together stories of people caught up in the unwieldy, impersonal and often seemingly illogical world of government bureaucracy. Not unlike the recently released I, Daniel Blake, such a bureaucracy is shown to brutalise those who depend on it the most.

Caroline Smith is perfectly placed to write these stories, having worked as an asylum caseworker for a London MP. In a recent interview in Eastern Eye, Smith explained:

“It’s called The Immigration Handbook because it comes at the issue of immigration from different people’s perspectives, whether it’s the immigration judge, the asylum seeker, or the case worker.”

This multiplicity of views is one of the main strengths of the book, and without it, the poems could have been unremittingly dark. As it is, many are suffused with a sense of hopelessness, which would be deeply troubling and upsetting were it not for Smith’s empathic listening and objectivity. Post-Brexit, this feels like a necessary project. Now more than ever, we need writers to draw attention to the human suffering behind the headlines and to challenge the often disturbing and extreme language that is used to describe migrants and refugees.

In the first poem of the book, ‘On Hold’ we are introduced to Arjan Mehta. This poem is short, and worth quoting in full, as it illustrates many of the key concerns explored throughout the collection.

‘There is no timescale for dealing with this application’

He was just twenty-three
Arjan Mehta, when first he began
calling the Home Office
from a red phone box
on the corner of Preston Road;
would push against
and let fall behind him
the heavy creaking door,
into its stale, vacated, smoke smell,
stand on its concrete littered floor
his fingers twisting through
the plastic snake cord,
dragging round the metal dial,
eager about his application.
Seventeen years have passed
with no answer.
He is now forty.
The sealed-up phone box
long out of service,
the black cradle
within its sepulchre,
silent as an obsidian urn.

The poem opens a door onto a world that many people are not aware of, and simply asks you to look through. The language used is simplistic and factual, and the long opening sentence fits with the idea of being on hold, of things going on indefinitely. This is contrasted with the factual, short, sharp statement: ‘Seventeen years have passed / with no answer’.

Perhaps the most surprising thing I realised after reading this collection is that the pain of waiting for an answer that never comes, of having no home, or the possibility of having your home taken away, can be just as damaging as physical violence, and the haunting image of the sealed-up phone box at the end of this poem symbolises this brilliantly.

‘On Hold’ begins with an epigraph of ‘official’ text taken from communication with the Home Office. This technique of weaving in official text to use as part of poems or to serve as epigraphs occurs throughout the collection. Taking this strategy even further, a copy of an original letter from the Home Office appears in full, roughly halfway through the collection. This letter begins ‘I refer to your clients No Time Limit application which has been outstanding since 12 December 2006.’  The letter is dated 21 September 2015.

Smith makes the titles of her poems work hard. They often have two meanings – as in ‘On Hold’ with its literal meaning of being ‘on hold’ on the phone, and the secondary reference to the idea of someone’s life being on hold. In ‘The Jumper’ the reader begins by thinking that it refers to an item of clothing, as we read about a nurse who is caught stealing a jumper. She pays the price years later, when she is refused the right to stay because of the ‘criminal act’ committed in her youth. The poem finishes:

How she could see no other way –
how without her, they’d be allowed to stay.

Suddenly the title takes on a whole new meaning.

In another poem, ‘Omnipotence’, after reading lots of poems in the voice of an observer or an outsider, we are in the first person. An asylum case worker tells us:

He’d been bugging me all morning,
phoning insistently
so confident of his rights.
Just wanted the Home Office to hurry up –
but he was bolshie and I snapped.
Told him they were doing further checks,
had called up another file.
Then I heard his voice crumple and go small;
‘please don’t push them too hard then,
don’t make them angry,
I’ll leave it to time.’

Again, the title of the poem deepens the impact of the poem – and the sense of shame which comes from this moment of self-reflection on the part of the speaker is both startling and moving.

One of the things that keeps the collection fresh and surprising is the considered exploration of the viewpoints of those who work with and alongside migrants or refugees – various caseworkers, judges and officers operating within the constraints of the asylum system. The first two poems, exploring the lives of two different asylum seekers respectively are followed by ‘The Scarlet Lizard’, a different kind of poem altogether. This poem, is again spoken in the voice of an observer, but this time looking at a judge.  Here is the Judge, reading through a report:

He needed to sense some quiver of
indecision, an odd detail
that would open the truth of their words;
chinks of light shining
through shuttered doors.

And in ‘Red Road Flats’ we read:

When the Presenting Officer heard of
their suicides following the ruling
it was as if he’d woken up
and found himself
a trespasser in his own garden.

People are not presented simplistically, and although the news of the suicides make the latter poem particularly dark, the exploration of the impact that this has on the people dealing with these cases is delicately drawn does alleviate the sense of hopelessness in a small way. Though the asylum system is inhuman, real people are part of it, and these people are also human beings who are compassionate and flawed and struggling to understand the situation they find themselves in.

The problem of writing other people’s stories is a difficult one, particularly when dealing with groups of people who have already been silenced time and time again. The position of witness is often difficult one to pull off because of the position the author must maintain as outsider, but Smith is successful here: she negotiates and avoids the pit of slipping into sentimentality and mawkishness. This collection explores this idea of ‘poetry as witness’ layering story after story of trauma and pain on top of each other in orderly way that is to be admired – in a shocking poem, Smith factually recounts how a middle child of three is sent home because he is the only one in his family that doesn’t have a visa.

If I could wish for anything else it would have been for a few more poems exploring the impact of working with refugees/asylum seekers in the first person so that there was more of a range of tone throughout the collection. However, this is a small quibble – I found the book moving, disturbing and revelatory in its exposure of the intricacies of the immigration system. 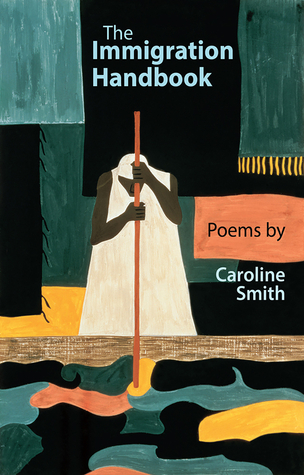 You can order The Immigration Handbook by Caroline Smith from the Seren website.