To fragment a text is to make it more object-like – gnomic, you could say, in the sense of knowing something that’s beyond both writer and reader, and so capable of being read back (more richly and ambiguously) into the world. For Nuar Alsadir, whose Fourth Person Singular is composed of fragments, sketches, and micro-essays, it’s these moments of pricking that count.

Fourth Person Singular begins: ‘The door to my interior was propped open and a fly buzzed in.’ The interior is only glimpsed at, a slit of light seen through the murk of self and shame, and crucially it isn’t the poet able to cross the limen but a fly, as in Emily Dickinson’s ballad from beyond the grave:

The Stillness in the Room

Between the Heaves of Storm –

The death of the author is the point of departure. One fragment, titled ‘&’, starts ‘Who are you whose story evaporates? / Mourners bend over your body’. What’s left once the story – and the ‘I’ telling it – evaporates? A new kind of aesthetics.

Alsadir approvingly quotes Freud’s observation that aesthetics has been in thrall to the Romantic concern ‘with what is beautiful, attractive and sublime… rather than with the opposite feelings of repulsion and distress.’ Flies don’t distinguish between ripe and rotting flesh, between sites of beauty and repulsion – they buzz directly towards both. And it’s through flies, in part, that Alsadir tries out to get beyond the ‘I’. She is looking for ‘goggles or gloves’, as she puts it, a way of approaching the Lacanian Real by ‘going through something else’.

And if she can’t go through something else, disruption works too. Alsadir calls disruption ‘silence inserting a pause in the volley-like exchange of conversation’. She gives a particularly graphic example of the dangers that ensue from a lack of pause: ‘The detainees in Abu Ghraib, in being given names according to the functions associated with them (“Taxi Cab Driver,” “Rapist”), were ready-at-hand as opposed to present-at-hand, which perhaps contributed to the soldiers’ objectification of them.’ Being named in terms of their functions was the necessary precondition for the (ab)use of those detainees.

One of the biggest influences on Fourth Person Singular is the philosopher Martin Heidegger, whose terms (ready-at-hand and present-at-hand) provide much of the book’s conceptual framework. Heidegger also drew a famous between humans as weltbilden (world-forming) and animals as weltarm (poor in world); whereas humans are absorbed in historical time, animals are absorbed in their environment. One way that Alsadir manages to fleetingly take up a subject-position outside of herself – and historical time – is on the train. She opens one micro-essay with a beautiful description of a commute on the Q train between Manhattan and Brooklyn, where she vows ‘not to stand with my back to the world’ so as to be able to catch a glimpse of the various things passing by the window – the ‘water in Dumbo, the Staten Island Ferry, or ALPHA MANGO’ – each time feeling ‘a piercing sensation’, which reminds her of how Nietzsche described his aphorisms as ‘little stabs at happiness‘.

That image of stabbing happiness is echoed in Roland Barthes famous distinction, quoted by Alsadir, between the studium and punctum of a photograph, the first being the image’s ‘manifest meaning’ and the second, in Alsadir’s words, the element of a photograph that has ‘a chance resonance with one’s interior and is experienced as a kind of puncture’. It is the ‘accident,’ says Barthes, ‘which pricks, bruises me’. This makes sense of the Night Fragments she includes, written oﬀ the top of her head (she says) on waking at 3:15 a.m over a number of nights. This is writing on the brink of consciousness, attempting to leave space for ‘accident’, for pricking. The sixteenth Night Fragment reads:

The sheet won’t stay on the corner of

this moment, keeps pulling up to reveal

the blankness beneath. Elastic gives a

Here, again, we’re given a hint of something half concealed, half pulled up, and of a dead body (that sheet – of paper or linen – almost revealing something horrible). Elasticity provides a counter-spirit to that of puncturing; an elastic speaker or poem bends with pressure, absorbing it, but Alsadir doesn’t want to take on a falsely resonant, naturalistic voice – falseness represented by the act of ‘eating grapes’, which connotes pleasure and aestheticism. She wants to achieve resonance through stabbing, puncturing the surface of the poem.

The concept behind the ‘fourth person singular’ itself – from which the title is drawn – is knotty and perhaps works better in action than theory. Alsadir calls it a form of lyric address which ‘occurs not only between an I and a you, but between separate parts of mind and diﬀerent states of self’. These separate states exist in the fourth dimension – in time, rather than space – because the self is not single and entire, but a hodgepodge of successive states of mind.

So it was when Wordsworth wrote that fragment – later stitched into the ‘Immortality’ ode – about seeing a rainbow as an adult and instantly being plunged back into his first experience of a rainbow. The difference is, for the Romantics, though time might be made up of diffuse, dissipated moments, they still needed to be recollected and gathered up into an elastic (still-coherent) self. And rather than seeing fragments as broken things – parts of a lost whole – Romantics like the critic Friedrich Schlegel called each one ‘a small work of art… entirely isolated from the surrounding world and complete in itself like a hedgehog’. The fragment-as-hedgehog thus expressed a larger weltanschauung – a universal truth about the spirit of the age or of “man”.

Importantly, for Alsadir, her fragments are meant to be (chancely) resonated with, not recollected. How much you get from Fourth Person Singular will probably depend on your tolerance for the ‘blankness beneath’, for what happens when you remove the studium, the context in which the punctum pricks. This is poetry which is all punctum and nothing but the punctum.

Ezra Pound’s Cantos – several more times frazzled than Eliot’s wildest experiments with fragmentation – still have lines like these (from the end of ‘Canto LVVIV’):

so light is the urging, so ordered the dark

petals of iron we who have passed over

Through the fractured lens of Ben Jonson, the longing for aesthetic order is evident, symbolized in the chance rose-like pattern made by magnetised steel filaments. One of Alsadir’s fragments, in clear response to this, reads in its entirety:

and scrambled them, redistributing the metal shavings.

And that’s her poetics, such as it is: not a rose or a dream of order but a lot of scrambled metal shavings. At the back of my book, I made a list of ‘shavings’, most of which I haven’t been able to touch on here, like: syncope/tmesis; dash/ing/ed; the problem of retaining the multiplicity of the ‘you’; panic, anxiety, and its relationship to shame (cf. Levinas, who called shame the state of being ‘riveted to oneself’, unable to escape); silence, its (under)smell; dumpsters vs. bins; grain; flash(es) vs. dash(es); possession; thirst.

What can such radical objects tell us? Samuel Beckett, in Malone Dies, suggest their role is ‘to restore silence’ (and therefore thought), and, whether or not it actually succeeds in writing in the ‘fourth person singular’, Fourth Person Singular is an exhilarating, scrambling, blankly depressing, grieving, stabbing, and brilliant attempt restoring silence (and thought) to our experience of the world. 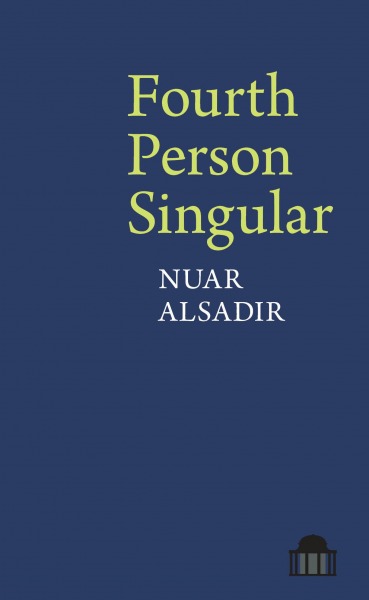 You can buy from Fourth Person Singular by Nuar Alsadsir from the Liverpool University Press website.