Billy Letford’s first collection Bevel found the poet grappling with graft, family and home and in his keenly anticipated follow-up Dirt, he keeps these themes close to heart while venturing further afield, never ‘feart’ to get his hands dirty.

There is the staple poetry you would expect from Letford here: elegy, anger and memory. But there is also a winningly un-fastidious lust for life in the present, in all the things left out of the ‘received’ or reported story:

I could take this opportunity

to wish you love and happiness

but you’ve already got that.

No, my wish for you

is the incidental, the ordinary,

by the way their fork moves across a plate,

to see the majesty in someone’s back, sleeping.

The collection is full of directions, the poet or speakers often giving us friendly advice, such as the call to ‘write well’ and ‘take care’ of a loved one in ‘In a bamboo shack on the edge of the beach’. This shows us a burgeoning confidence in the voice of Letford’s poems, to break the barrier between writer and reader so explicitly.

In the first untitled poem we are urged to take our ‘eyes from the heavens, / look long and deep’. To underscore this idea the motif ‘OjOs’ appears throughout the collection, and one can only assume this is the Spanish word for ‘eyes’, the poet urging us to keep them open at all times.

‘Taking it all in’ also feeds into another of the collection’s themes: gluttony. In ‘The interview’ the speaker says their most ‘positive attribute’ is gluttony and that they want it all – the agony and the ecstasy and madness over normality. At first it sounds like bluster and bombast, but the idea of jouissance is one borne of dirt – sheer intellectual pleasure tinged with an awareness of all the pain that goes along with living (and dying).

The idea that poetry needs to come down from its ivory-tower and get its hands dirty is nothing new: I was reading the poems thinking of (yet another French term) nostalgie de la boue – something that has also had a powerful presence in Scottish writing over the centuries – the rubies in the muck. This resonates with the gruff-sounding titles of his books – bevel, dirt – that soon give way to garrulous and excitable voices.

So, where is this ‘dirt’? Well, it takes many forms, from the literal and scatological (see ‘Let it go’ where the speaker falls victim to holiday diarrhoea and his ‘sphincter pouts like a smoker’s lips’) to the more social and figurative, the kind of lives that are considered worthless by a callous government such as the homeless woman in ‘The grain’ who the speaker finds beautiful in her ageing dignity. The title poem gives us Letford’s philosophy for the whole collection, that where there’s dirt there’s fertility and promise:

through mud to get here. I want saliva and spit and I

want that part of your mind. To celebrate it. To act it out.

There’s dignity there. Lay yourself open. We’ll both

blossom. If you want me to call you a whore, I’ll do it.

Stand in the muck with me. Live amongst flowers.

While loving dirt is nothing new in poetry, Letford has his own unique take on it. He celebrates the abject body and all of its functions are part of living deeply and intensely. Dirt for Letford is a fecund place for poetry. Throughout the collection he collects seeds of memories and re-scatters them, planting them in our heads. Where he finds life blooming, he lives and lets live. The gleefully offbeat poem ‘Delight’ shows a manual worker who keeps a pair of stilettos in their freezer, to wear when they get back from work. In ‘Any way you can’ we see the poet’s grandmother smoke a joint and show her grandson pictures of her with Arthur Scargill; he celebrates his grandmother’s free thinking and there is a joyous anger to the call to ‘fuck them all, any way you can’.

You have to read on until the penultimate poem to really get Letford’s special perspective. ‘A garden’ is a memory from his roofing days. Here Letford is doing the roof for an old couple and the man is blind, but his wife needs his help in the garden. Letford witnesses the scene from the vantage point of the roof:

elbow and led him out of the greenhouse,

talking to him all the way. They moved

with confidence. The wheelbarrow trundled

in front. Can’t recall if the job was in

Kippen or Balquidder but I remember how

beautiful their garden was. Full of colour.

We are thankful to Letford for having witnessed that touching scene, written about it and not let it go unremarked. The overlooked and underappreciated appear in many of these poems, such as the busker in ‘This is it’ who everyone passes by, but in whom the speaker sees a true creative force. Or take the boy with asthma in ‘Wisdom’ who is ripe for being bullied but all the speaker notices is the boy’s ‘electric’ eyes that are so big ‘he could tip his head back and pour the world in’.

It is one particular poem of home and family that stands head and shoulders above any other poem in the collection: ‘Monuments of the mind’. This is an imagined conversation between Letford and his late father and grandfather, sitting in the kitchen of a house that does not exist. Both dead men smoke while Letford eats a bowl of soup because they ‘like to see me eat’. Here the speaker represents life and the desire to go on but there’s also an anger, a defiance and determination to his voice. Even though he is accepting his fate, we know he’s going to relish and treasure life as much as he can:

(…) The room has been stained

by two lifetimes of tobacco smoke, and doesn’t

physically exist. But it’s where I come for advice. In fact

both men no longer exist, but their voices are as familiar

as my own failings. I slam my spoon onto the table.

‘That’s the way it is,’ says my grandfather.

My father nods his head. He says, ‘That is the way it is.’

~ from ‘Monuments of the mind’

So where does this all leave us? The central theme of omnivorous hunger and taste for living is a winning one and many of the poems here explore that well. While Letford has gone much farther (geographically speaking – many of these new poems find Letford travelling far abroad in India) the finest poems here remain from the territory he carved out in Bevel of home, family, love and work. While the poetry written about or in India is certainly of interest, it is of a slighter nature: more impressionistic and arguably superficial (what does ‘annaromaroof’ mean?). But even saying this, there is a sense that the time spent in India was one of gestation, allowing the poems of home to come into a sharper, keener focus. The collection could certainly do without the concrete experiments; many essentially lyrical poets feel they can work with concrete poetry, but it is a separate art form all of its own. At his best however, Letford works age-old themes in startling, colourful and fresh ways, using always a wide emotional palette. 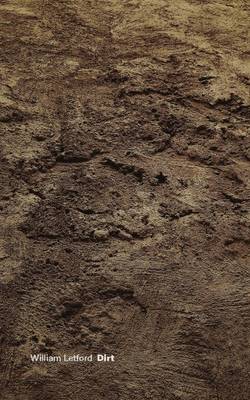 You can order Dirt by William Letford from the Carcanet website.