I drift between rehearsals staging a peasant’s revolt, watching the actors transform into Money, Holy Church, False, The Pie Seller, and a man running through a dream trying to save the world. I dive head first into Langland’s politically rife, distinctly religious, world. I think about the many problems of today, contemplate the inevitable end of the world, and try to find the right words to write the apocalypse.

I began by unravelling the parallels between Piers Plowman and today’s political climate, focusing on economic inequality, worker’s rights, apocalyptic fears and the breakdown of morals, and then attempted to use these parallels as inspirations for poems that echo Langland’s political satire and metaphysical verse. Poems well outside of my comfort zone, poems that blinked at me from the screen as if to say “where on earth did this come from?” Looking at the other poems I’ve written (pre Fair Field) as if they were uninvited guests at a party, who eventually (after a few drinks) got a long like old friends. My old and new poems will now probably get together and create a series of extra new poems that are both in and outside of my comfort zone, commenting on current political issues through the dream-like tropes routed in Piers Plowman. What I’m getting at is, working as the resident poet for Fair Field has introduced me to new styles and methods of writing which I think will significantly influence the work I create in the future. 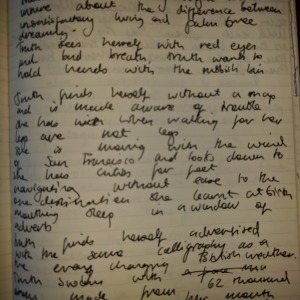 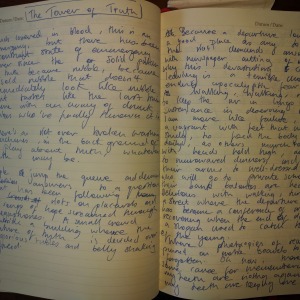 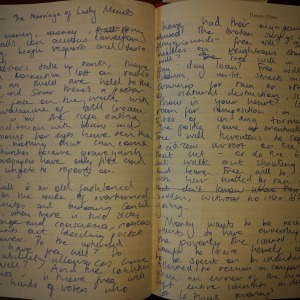 I wrote, surrounded by actors, directors, technicians, stage managers, using words written by others as inspiration for my own words. Here, I found a new way of writing words, well, new for me that is, I’m not sure if a method is every really 100% new, but it was certainly new for me. This new way involved sitting in the rehearsal room catching snippets of lines and using those snippets as the first line of a free write. I wrote nearly ten pages in my notebook while listening to a read through. I looked back over what I had written when I got home and saw a strange combination of verbatim lines from the scripts and my own interpretations of those lines. Simultaneously including what was actually happening around me and my own inner subjectivity and rhythms of consciousness. This ‘new’ method of writing is something I will take with me from this project. I can see myself sitting on trains, buses, bars and other noisy public spaces, inhaling the exterior events taking place around me and producing words that both record and distort what is happening.

I responded instinctively to Fair Field, through improvised writing. I was given the freedom to create without restrictive guidelines, but whatever I created was commissioned and so was a very different experience from creating something and then sending it out into the world, not sure if it would find a home. Everything I created for Fair Field already had a home and therefore felt valid. This combination of being free to create whatever interested me and obliged to create something specific was liberating. Not to mention the fact that being commissioned to write poetry was a wonderful confidence injection. And for this new found confidence, creative validation, and pot of ideas for future work, I would like to thank everyone involved in Fair Field for allowing me to be a part of a remarkable project.

Sophie Fenella was Poet in Residence for Fair Field – a multi-arts re-imagining of the medieval epic poem Piers Plowman in Summer 2017. The residency was an initiative run in collaboration between the Poetry School and Penned in the Margins. You can read the poetry and prose created by Sophie in full on thisfairfield.com