Siberia is one of the most sparsely populated places on Earth. Against a black backdrop, Perienne Christian’s etching is informed by her own family’s history, the harrowing escape of her grandparents from a hard labour camp, walking at night, hiding and surviving on tiny amounts of food.

See the interview with Perienne here.

At Poetry in Aldeburgh: Perienne Christian will be leading workshops on Poetry & Drawing with Clara Drummond on Saturday 5th November and Sunday 6th November in The Lookout. The three workshops will take as their inspiration Alice Oswald & Kathleen Jamie, George Crabbe, and Ovid. 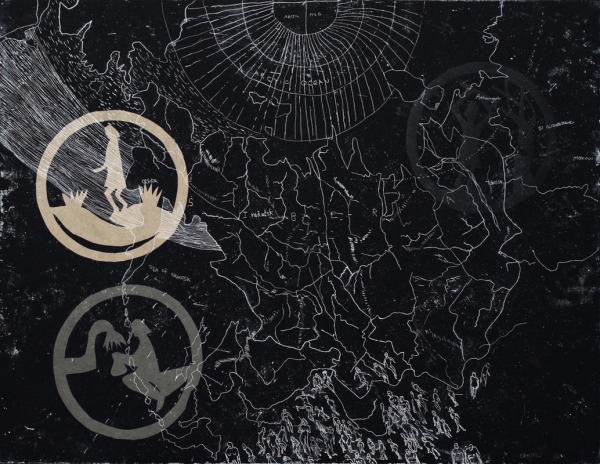 Perienne Christian’s ‘Phantasmagoria’ project is an attempt to document the images and landscape of the dream world. Edward Clodd, banker, writer and anthropologist, and Aldeburgh resident well-known for his Whitsunday gatherings of literary and scientific friends, was wary of the power of dreams to lead people to believe in the supernatural and spiritualism. His book Myths and Dreams (1891) argues how myths and dreams contort how people think, and gives many examples from around the world, such as Greenlanders believing that the soul leaves the body if they dream of fishing, hunting, or courting. Meanwhile the development of cinema, where rules of science and sensory experience could be broken, opened up a medium that often resonates with the language of dreams. In 1907, Rémy de Gourmont wrote that the cinema is “the best place to repose: the images pass borne aloft by light music. One need not even bother to dream.” Today’s task is to create a poem inspired by a dream of your own or another’s, with the focus on either the dream or the dream’s impact on a person’s perception of reality, possibly in doing so blurring the lines between the two.

You can read Clodd’s Myths and Dreams here.

Also for inspiration, a sample of silent films here: