Home » Blog » How I Did It: ‘How to Renovate a Morris Minor’

I was having a conversation this week with a brilliant Welsh poet, who’s currently at work on his second collection. He said something about his creative process which resonated strongly with me: he was working hard, he said, to get to the stage where the poems wrote themselves.

That’s always been it for me: the best poems come as unasked-for gifts, often when you’ve been working intensely on another project which it becomes clear isn’t going to work. That release, that energy, into something which feels so right after something which hasn’t, for so long, can really carry a poem. So it was with one of my favourite poems from My Family and Other Superheroes, ‘How to Renovate a Morris Minor.’

The poem came about after I’d been working intensely on two projects: one was a sequence of valleys character portraits working with the inheritance of RS Thomas; another was a sequence based around the amazing Katharine Hepburn film, Bringing Up Baby. This was in the summer of 2012, and I’d been looking forward to writing those poems all the preceding teaching term, but they just weren’t right, and I was getting bogged down. We had a bit of a family crisis the night before the writing of ‘How to Renovate a Morris Minor,’ and as a result I had about three hours’ sleep. If you’re under any illusion that altered states of mind can help poets achieve their true potential, Richard Holmes’s brilliant biographies of Coleridge will help you see more clearly. But it is the case that sleeplessness, with its unpredictable, sometimes manic energies, its slightly distorted perception, has sometimes helped poems for me. Importantly, I think, when I got up that morning, I knew for a fact that I wasn’t going to write anything that day.

I wrote the first draft of the poem that afternoon, in a café in Newport. It looks like this: 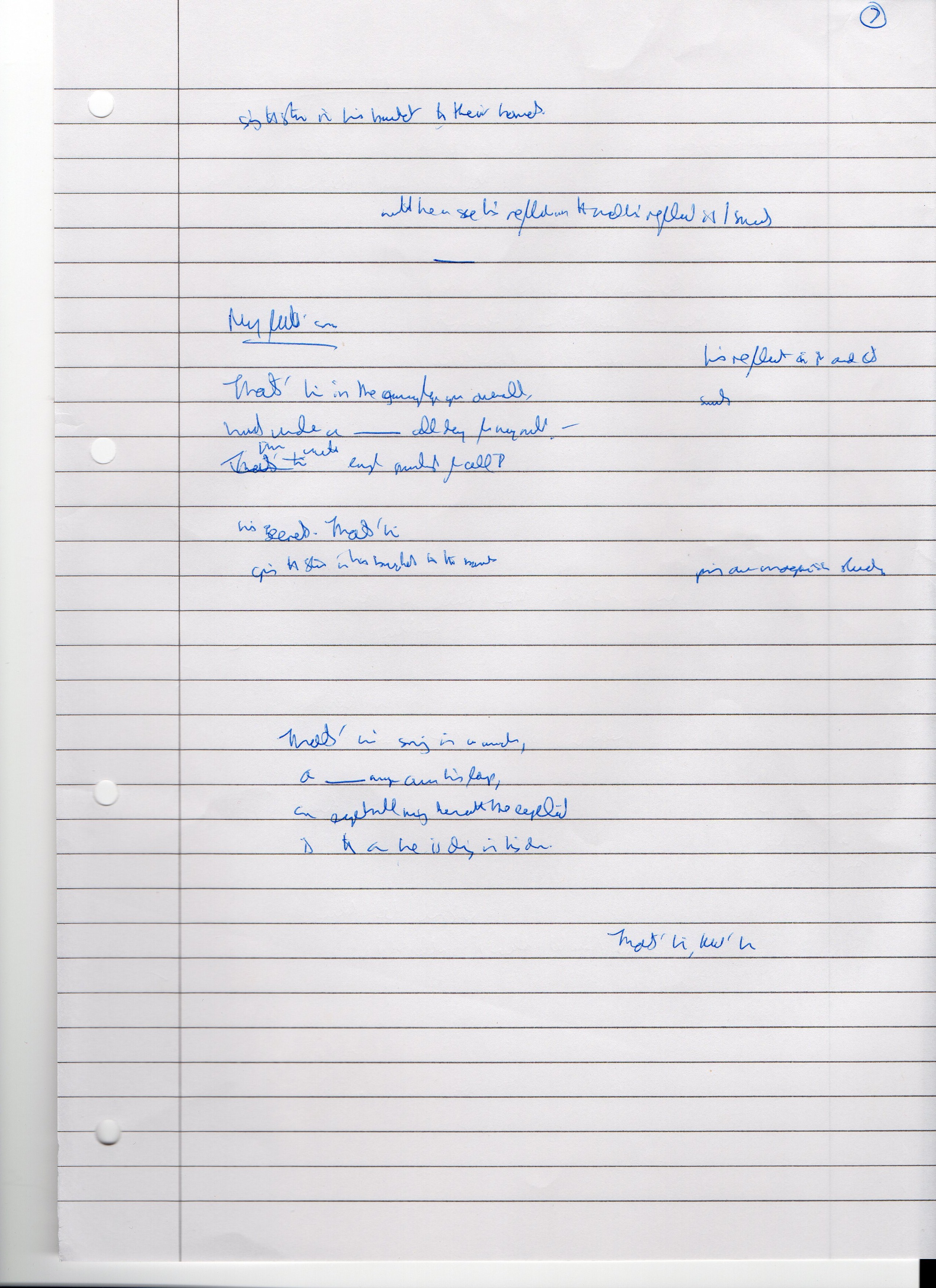 I’d been on an Arvon course about five years before the writing of this poem, in which Hugo Williams ran a session on character sketches. The lines about my father wearing camouflage green overalls and hiding under the car from my mother date from that time. I’d had them in my head for years but never managed to include them in a sustained piece – this was also, of course, a failure to write about my father. I can see that those lines were among the first I wrote down. The line at the top of the page, ‘giving the stars in his bucket to their bonnets,’ also survives, more or less, in the final draft. That was a line from a failed, years-old poem about a window cleaner. Hugo talked on that Arvon course about how, when he’s finished a poem, he gathers up all the lines which haven’t made it into the final draft and tries to make another poem out of them. When I look at that first page, I can see that’s what I’ve done. I’m never organised enough with notebooks and so on, but lines you want to do something with survive in the mind for years, waiting for when you need them – the mind has its own, much better cut-up processes than Burroughs could have devised.

I was writing in the café until it closed, and continued at home, until about three in the morning. I see that time generated forty-one handwritten drafts. This is pretty typical for me – I write in short, sustained bursts, and it’s very much about tapping into the energy of the poem. The ending of the poem begins to emerge in note form in draft 9: 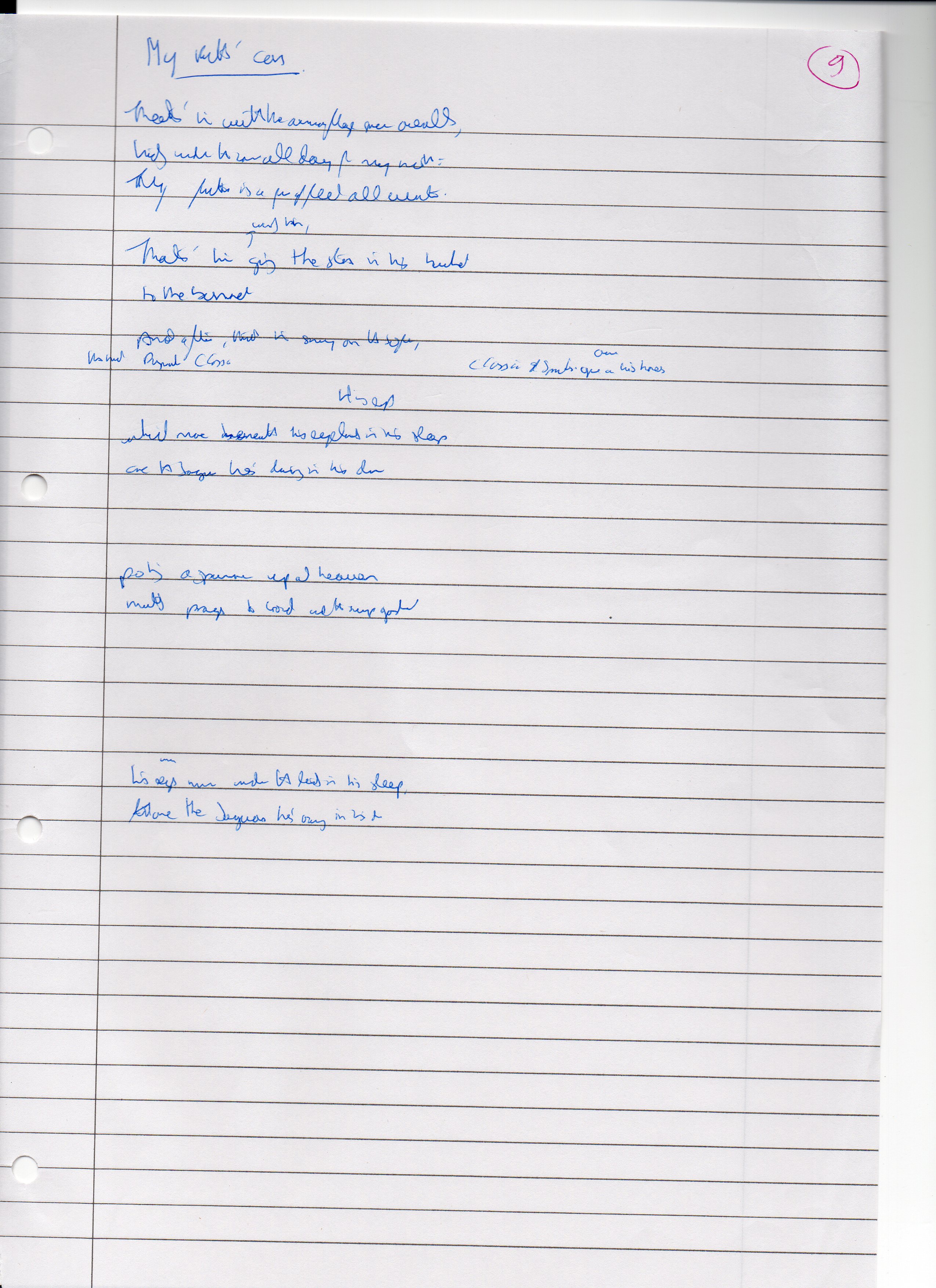 Endings of poems are so important – I often say flippantly to my classes that if you have a good first line and a good last line, people will forget how bad the rest is. You know when a poem’s going to work because you feel it. When it happens, I am squealing or punching the air or pace the living room and shout at the goddamn lucky walls. It’s a moment of manic joy. When I could see that ending, this poem was like that.

At draft 16, the poem is called ‘My Father’s Car,’ and is still all one stanza: 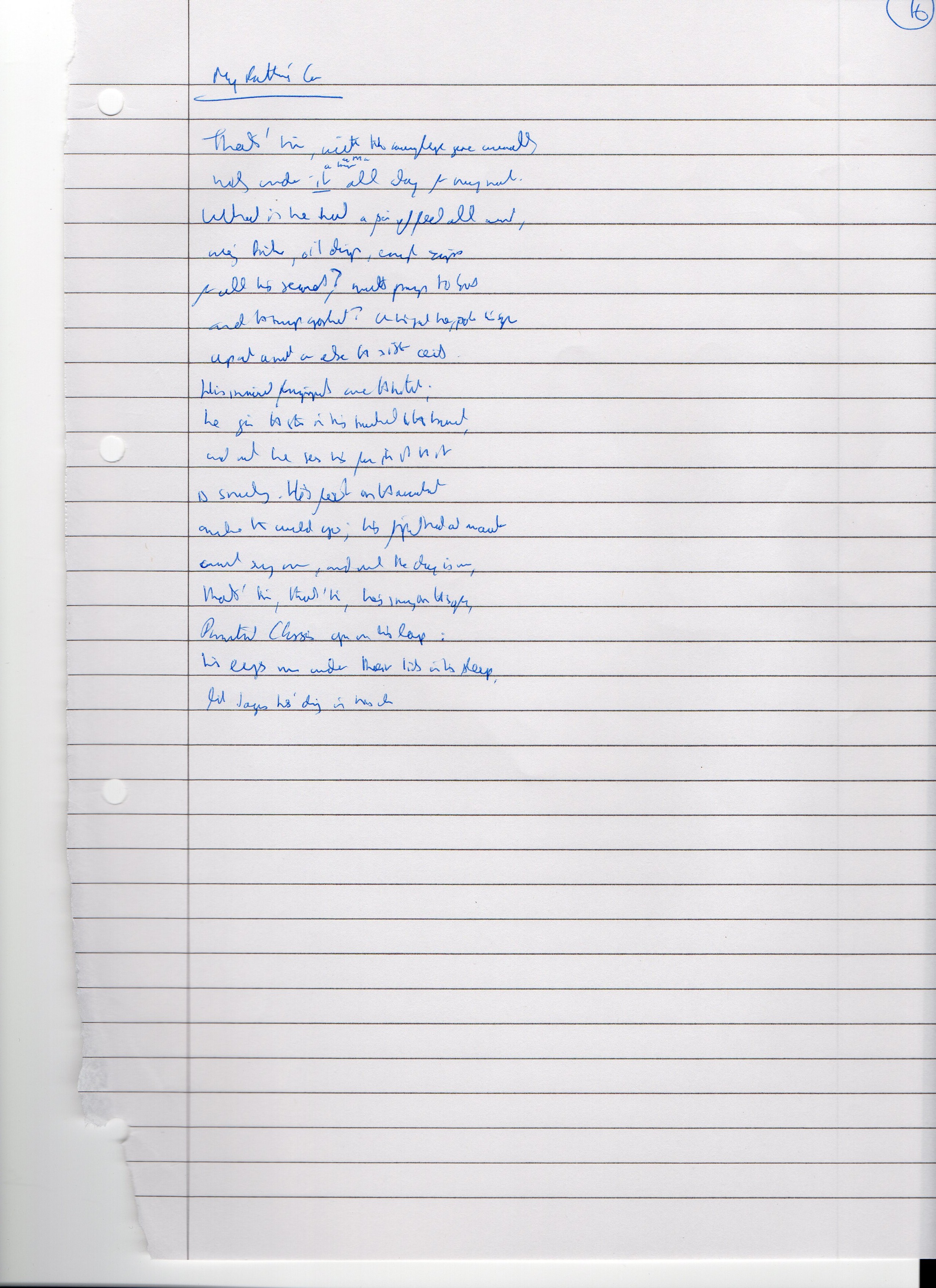 By draft 23 it has the word ‘finished’ in the top right hand corner and, around the main draft in blue, loads of notes in purple. I should say here that multi-coloured pens – the Bic four colour ones, the more ambitious six- and eight-colour ones – are absolutely central to my practice. There’s something about developing a working draft in one colour while noting down furiously around it all the different directions you’re thinking the poem could go in, which allows the poem to develop organically, creating a good balance between structure and the free play of ideas. 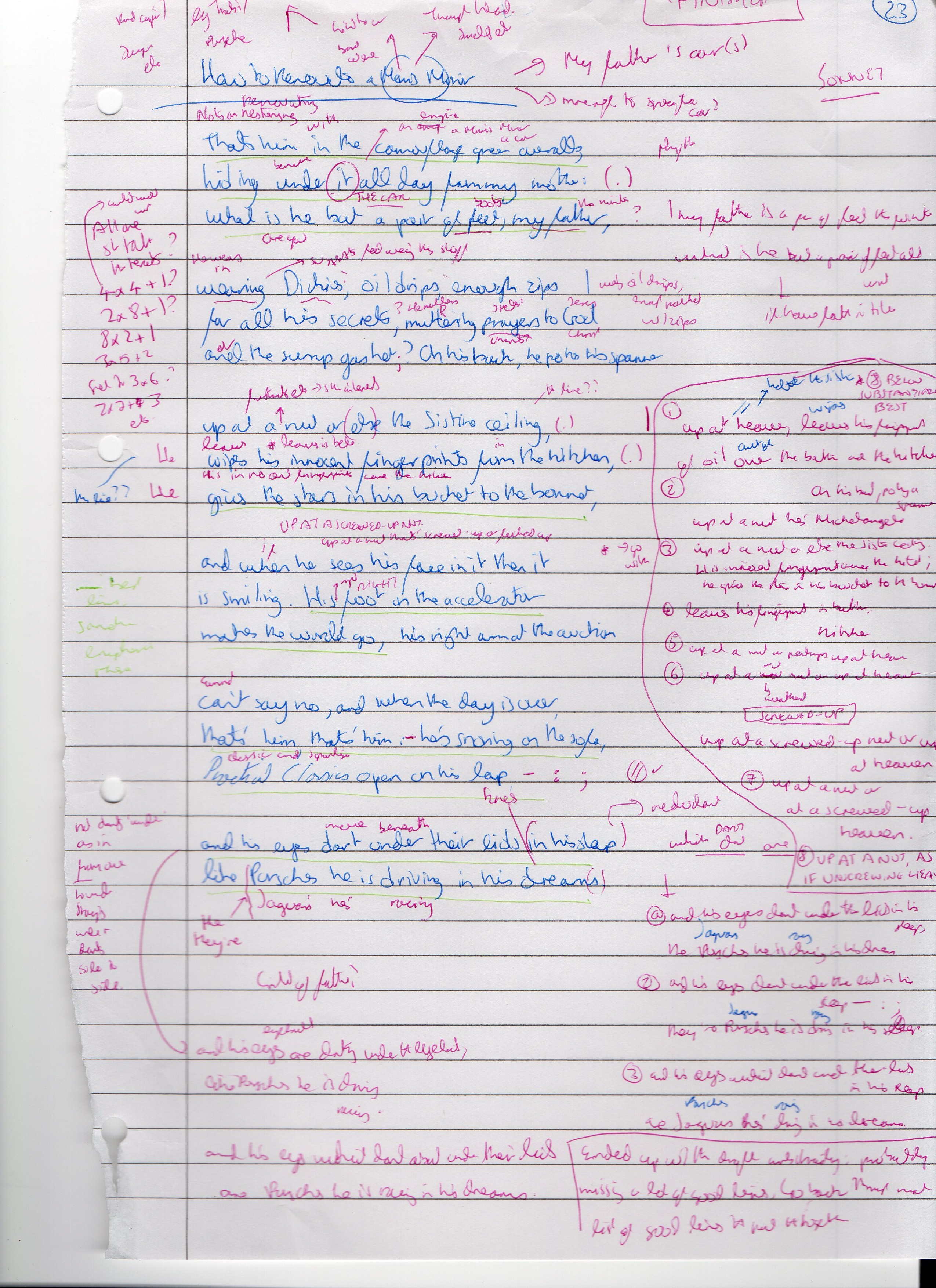 By this stage, a draft is very much about preservation. I want a sheet of paper which gives me everything I need to work on the poem when I get back to it in a few months’ time. So I’m trying to get down a record of a ‘final’ version while also collating all the ideas that have been zooming round my mind these last few hours.

The remaining drafts are very much about playing around with this ‘finished’ version and trying it out in different forms, as a shorter and as a longer poem. After this initial burst, writing is very much for me about waiting and doing nothing. I came back to this poem on a Saturday in September, to type it up, mess about with it and generally see if there was anything worth preserving. Here’s the first typed version:

How to Renovate a Morris Minor

That’s him, in the camouflage green overalls,
hiding under the car all day from my mother.
What is he but a pair of feet, my father,

wearing oil drips, enough zips for all
his secrets? That’s him, poking with a spanner
up at a nut, as if unscrewing heaven;

grease-fingerprints make a crime scene of the kitchen.
He gives the stars in his bucket to the bonnet,
the windows, his foot on the accelerator

makes the world go and, when the day is over,
that’s him, that’s him – he’s snoring on the sofa,
Practical Classics open on his lap –

his eyes dart under their lids as he sleeps,
like all the cars he’s racing in his dreams.

It’s pretty close to the finished version now, but nonetheless it’s nine files and twenty-one typed pages later – having worked the poem again through sonnet, short and long versions – before it finds its final form:

How to Renovate a Morris Minor

That’s him, in the camouflage green overalls,
hiding under the car all day from my mother¹.
What is he but a pair of feet, my father,

muttering prayers to God and the sump gasket,
wearing oil drips, enough zips for all
his secrets?² On his back, he pokes a spanner

up at a nut, as if unscrewing heaven³;
grease-fingers make a crime scene of the kitchen.
He gives the stars in his bucket to the bonnet4

and when he sees his face in it then it
is smiling. His foot on the accelerator
makes the world go5, his right arm at the auction

can’t say No and when the day is over,
that’s him, that’s him – he’s snoring on the sofa,
Practical Classics open on his lap –

his eyes dart under their lids as he sleeps6,
like Jaguars he’s racing in his dreams7.

1 – ‘That’s him, in the camouflage green overalls, / hiding under the car all day from my mother’ – Here are the lines, with very little change, I’d written in Hugo Williams’s workshop five years before this poem.

2 – ‘muttering prayers to God and the sump gasket, / wearing oil drips, enough zips for all / his secrets?’ – These two and a half lines took the most fiddling with. I wanted a line break after ‘God’ but couldn’t get it to work. I still don’t think that line break after ‘all’ is quite right now, but it was the best compromise I could come up with, and it’s the version that’s survived.

3 – ‘On his back, he pokes a spanner / up at a nut, as if unscrewing heaven’ – This line is adapted from a failed poem I’d written about Michelangelo painting the Sistine Chapel ceiling. That grandeur seemed appropriate. This is my dad.

4 – ‘He gives the stars in his bucket to the bonnet’ – Here’s the line stolen from the failed window cleaner poem.

5 – ‘His foot on the accelerator / makes the world go’ – There’s an echo here of another poem I love about the joy of cars, acceleration and fathers, Maurice Riordan’s ‘The Ten Commandments.’

6 – ‘his eyes dart under their lids as he sleeps’ – For a long time ‘dart’ was ‘move,’ which was too vague of course. This slight shift seemed like the best option.

7 – ‘like Jaguars he’s racing in his dreams’ – The relationship between the dream and the physical here is stolen from the ending of Jo Shapcott’s ‘My Life Asleep.’ I was so happy when this ending came out of the pen, as it seemed I might finally have something for my father, who I’d been desperate, and struggling, to find a way to write about for years.