Most people know me as a “performance poet”. I don’t like the term, it’s rather restrictive and plenty of what I write ends up in books, not on stage.

Sound is very important though. I want the poem to sound good, to rattle off the tongue, or fall on the ear like a big, soft duvet. Writing, therefore, is a pretty oral experience. I’m constantly saying the lines out loud. Good for getting a table to yourself on the train.

This poem was written at the tail end of 2013. It comes from an idea I had earlier in the year. I had written down ‘Flamboyant Fat Man’ (about myself!) as a potential title. A month or two later I was walking through Bath explaining the idea to another poet, Byron Vincent. The new title ‘Fat Dandy’ came out of bantering around the idea. My comic minds works better when it has another to spar with (not unusual, many comedy scripts are written in pairs or threes).

The title is (I think) funny, to the point, assonantal, and the first two syllables are almost a spondee which gives it punch. Once I had this title I let it sit in a notebook till I had the time and inclination to write it. That’s usually how it works. Sometimes titles sit in a notebook for years.

I had a few false starts. It required a very playful mood, lots of energy that I couldn’t muster at first. I nearly gave up on it.

I knew the poem would be a character sketch, bringing together two lexicons – words and items relating to dandyism and those relating to being over weight. This is pretty classic comedy sketch territory: take two things that don’t go together and make a monster. Think of Monty Python’s Hell’s Grannies or the son who wants to be coal miner, not a writer like his dad. More recently Armstrong and Miller do a sketch that has RAF pilots talking in teen speak.

I don’t like writing two lists and milking every last idea out of the fusion. That makes the whole thing sterile and frankly boring to write. I used these two worlds (dandy vs fat) as a guide. I wanted to create something visceral and big. As unabashed and blatant as a man in eyeliner and signet rings devouring more KFC than is ever necessary.

Form is very important to me. I knew this poem would either be couplets in tetrameter or AAAX in tetrameter where X is the title. I felt like I had written too many AAAX poems of late so I opted for this instead. The form of a poem is often a reaction to what I wrote last. Or what I’m reading. I nick forms off Betjeman quite a lot. This form, where the title comes at the end of each 8 line verse is a form I’ve used all my career, I guess I first pinched it off John Cooper Clarke in 1998.

I didn’t write the poem from start to finish. I worked on couplets and stanzas in isolation and after I had about 2/3rds started pulling it together. There were four more couplets (a stanzas worth) that got thrown away, but I don’t seem to have any of them saved. They were probably genius.

You can listen to a recording of ‘Fat Dandy’ read by Luke Wright – made exclusively for The Poetry School – here:

Plumes5 of perfumed floral silk
his doughy skin as pale as milk
he lacks the peacock’s usual grace
with Playdoh flesh pressed through white lace6
he’ll chase the dragon, but that’s all he’ll chase7
a pie in his pocket,8 just in case.
If only Maccy Dees served brandy
wobbling and gobbling9 – FAT DANDY.

A fella built to do the haka’s
never dared to look so dapper.10
Fabulous! His signet rings
are slick with grease from chicken wings!
Why should runts have all the fun
and slobs get all the sticky buns?
He’s red faced as a Tory grandee
touch more slap though *burp*11 FAT DANDY!

Fetch my hairspray – call a cab.
Five a day? How fucking drab
My button hole? I think a rose!
Someone order Dominos!
(Then onward to the Hellfire Club)
Quentin get some crisps in love!
Is that blancmange? By Christ I’m randy
Mwah mwah… Nom nom nom! 12 FAT DANDY!

Each sin-strewn night a romp in pomp
a jingle-jangle Cuban stomp13
sleeve garters ping and buttons pop
yes, three cheers for the fast food fop.
A man who knows his inner worth
has nothing much to do with girth.14
A brazen mix of heels and candy
*crappy trumpet sound*15 – FAT DANDY!

1 – Humungous hocks – I’m not going to flag up all the alliteration but it’s pretty integral to my poetry. It gives everything an unreal feel, embosses lines so they jump out the page. Helps with the cartoonish nature of the character.

3 – Exercise and diet? Fuck it! – Bits of direct speech from your character neatly illustrate your point

4 – Oh, cheeky caesura – it all adds to the tune. This little stops makes the title more catchy.

5 – Plumes – I don’t say words like this in everyday life. But the voice of the character is all over this poem. I wanted big, ostentatious, OTT words. The line just sounds big and juicy to me. The grandstanding of P sounds giving way to the slur of Ls. To me it says Big, brassy, bold and drunk. Which is what I’m going for.

6 – Playdoh flesh pressed through white lace – This line is packed. The metre says: “FLESH pressed THROUGH white LACE” / we would usually say: “FLESH PRESSED through WHITE lace” or perhaps with LACE stressed too. I was aware of this when I wrote this fine and I thought it might just be a place holder, but in the end I liked it so it stayed. It sounds great when I read it to the metre, but doesn’t sound bad read more conversationally.

7 – chasing the dragon, but that’s all he’ll chase – Breaking the metre here with the unstressed “but that’s” – the effect when it’s read aloud is to give a more natural, unforced tone to counteract the quite stressed previous line.

8 – This comma is important. You could say it without, but the comma makes it seem more like an aside.

10 – never dared to look so dapper – I am disappointed this rhyme is not perfect, but it’s my favourite couplet in the poem.

11 – *burp* – People do this on Twitter as real-time stage directions. Like a lot of language developed on the internet its really useful and simple, so I use it.

13 – Each sin-strewn night a romp in pomp / a jingle-jangle Cuban stomp – You can say this so fast it sounds like you’re eating the words. Nom nom nom.

14 – A man who knows his inner worth / has nothing much to do with girth. – Here, children, is the moral.

15 – *crappy trumpet sound* – Live, I make this sound, which is pretty silly and I think reflects a nonchalant attitude towards the sometimes po-faced nature of literature. Though it’s possibly just stupid. I think it’s funny on the page too. 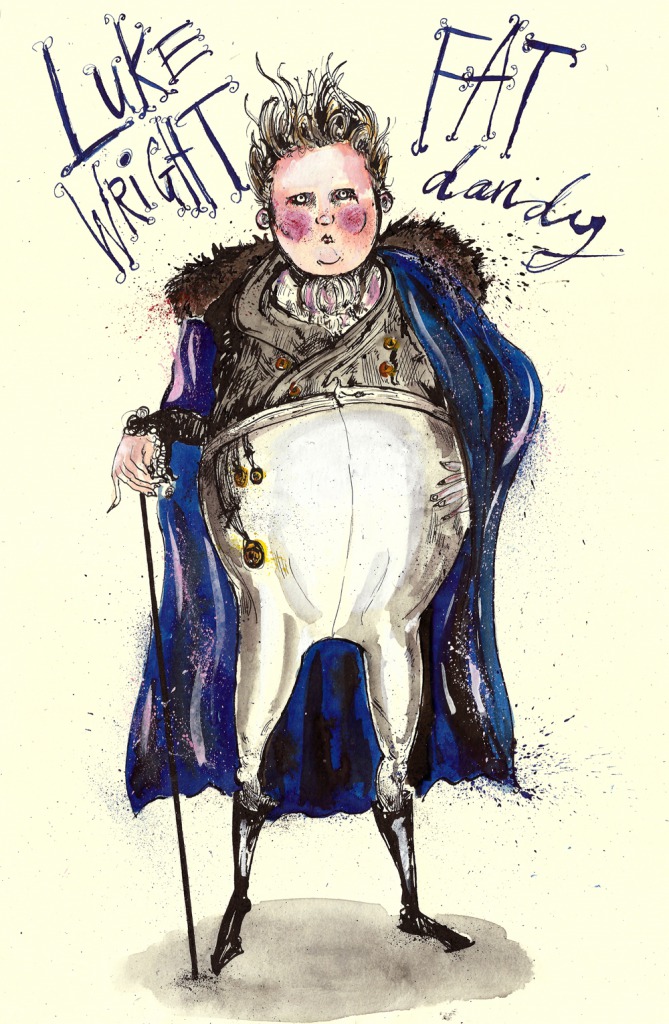 Luke Wright writes bawdy bar room ballads about small town tragedies and Westminster rogues and his live shows are enjoyed by thousands of people across the world every year. Audio-wise his poems are often on the radio, generally BBC Radios 3 & 4, sometimes further afield. He is a regular contributor to the Sony Award-winning Saturday Live and hosts and co-programmes all the poetry for The Latitude Poetry Arena, one of the biggest and most popular poetry events in Europe, with over 60 poets performing for 40 hours. He is also editor/manager of Nasty Little Press, publishing poets such as Martin Newell, John Osborne, Martin Figura, Salena Godden, Elvis McGonagall and Nic Aubury. He lives in the unfashionable bit of Suffolk with his wife and two sons.

Luke is currently touring  his latest show, Essex Lion all over the country (dates on his website), and will performing a selection of his ‘greatest hits’ at the Southbank Centre for one night only on 26 April 2014 (tickets available here).