Home » Blog » Retrospective: Looking back on ‘Hide and Seek in the Ideas Forest’ with Sophie Herxheimer

In this retrospective, we’ll be looking back at some of the poems and works of art created by students on Sophie Herxheimer’s recent Poetry School workshop,  ‘Hide and Seek in the Ideas Forest: Poetry and Picture Making’, and having a chat with Sophie herself about the day. First up, the interview…

Hi Sophie. In the workshop, you encouraged your participants to ‘collect stories’ and turn them into poetry, visual art, and all the ‘strange hybrid creatures’ in between. Tell me, what did this project grow out of?

Sophie: The initial project called The Listening Forest was a residency with Fermynwoods Contemporary Art. They invited me to build on the residency I’d had with them the year before, where I’d been collecting people’s stories in a log cabin in a country park. The stories were all about home: home as in feeling at home with yourself, home as in where and how do you live, home as animal habitat, (what is your style of nest….?) Then the next year, I was invited back for a longer residency – 3 or 4 days a month for nearly a year – and my agenda then was to collect people’s stories about nature. Did they see the forest as a soothing place, or a place to abandon burnt-out cars? Some people live rough there, people on the run, others rush through on their way to school, others look for peace. The mythical and the urban-mythical and the real collide in that space, in the forest.

You collected stories from all of these people. How does that process work?

Sophie: It’s a jaunty collision between therapy, sideshow, and performance!  Which totally suits me. I sit at a table with a chair opposite for the narrator and I ask them questions – very loose, open questions – and they tell me stuff. Then, when they’ve told me something for five minutes or so, I draw it in ink in front of them, using the words I’ve heard them say. And I’ll check back with them; I have to make sure that I use their words not mine, because it’s part of a listening exchange, and a kind of sharing. I’m concentrating very hard through it all, but it’s not really intellectual effort – it’s very instinctual. It’s about letting your ears and your hand do the work and almost detaching the brain. You can’t be judging people.

So it really is a collaborative process? Do you feel that this is a process that benefits both the storyteller and the artist?

Sophie: Benefit is too clean a word for it. It’s a kind of bizarre connection. I’m taking somebody else’s material and combining it with my own material and method, and making something new to surprise both parties. You don’t know how it’s going to affect people; it might be about a seemingly trivial anecdote, but I tend to think that what people tell you is very often dense with metaphor, and that’s what I’m listening for really. That’s what also pushed me into poetry, this marriage of the thing people say with what they’re really saying. What I choose to draw from their story, and what I choose to write down, is perhaps only 10% of what they’ve told me, so I have to choose the right bit, and that is poetry. 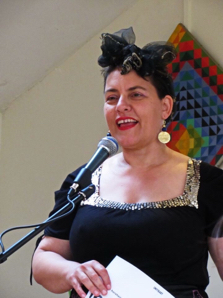 That’s fascinating – I actually wanted to ask about the relationship between art and poetry for you, and what the two have to say to each other. Are they part of the same process?

Sophie: Because I’m never usually form-led, I just go into a project and try to respond to what I find. The subject may demand a sequence of poems, or maybe screen prints; art and poetry are in the arrangement of images. Sometimes things demand words and sometimes they demand pictures, and if they demand both you’ve got to find a way for the words not to cancel out the pictures and for the pictures not to cancel out the words. You’ve got to make it so they don’t fight on the page. And because I’ve got a life-long fascination with books and how things look on the page – a graphic interest I would say – I’m very pre-disposed to making snap decisions about graphics, how the words and pictures coexist. I think my mind is occupied with both a lot of the time. The more tired/busy/immersed I get the more synaesthetic my responses!

Sophie: I wanted to create a space in which words would lead to pictures and then the pictures would lead to words and then the words lead to pictures again, so hopefully we’d end up with a stack of material. We started off with an exercise where you listen to your neighbour and they tell you a story. Everybody sat with someone they didn’t know, and after they’d both listened, they made a collage in response, bearing in mind what shape the story was, what colour the story was, what texture the story had. People said they found it quite moving the idea that they would be taking someone else’s story and trying to respond to it in a wordless fashion.

After that, we read some poems in which the big becomes small and the small becomes big. Miroslav Holub wrote a poem called The Forest, where all the enormous rocks become tiny in the face of a little mushroom that’s never been seen before. So the lunchtime exercise was to go out and find something really tiny and something so big you can’t fit it in your head or on the page, and then combine those in the draft of a poem. We then went back to the collages and wrote another poem in response to someones else’s collage, whose story we didn’t know.

Thanks Sophie. You can see some of the amazing poems written on the workshop below. Finally, what do you hope people got out of the workshop, and out of story collecting in general?

Sophie: My political angle is that if we listen to each others stories and make our poems and pictures out of those as well as our own, weaving them in together, we create another level of story world, which is to do with real experience. It’s a supportive network, so that when things get eroded, when there isn’t anybody to help you, if you have told me a story and that story gets out somewhere else, it still warms you with its distant fire; somebody heard you. It’s an indirect approach to creating community. It creates connections and empathy, and avoids the big spotlight on one’s own emotional journey which can be a sticky place for poetry. There’s an out-poetry and an in-poetry, and an out-art and in-art, and what I hope for with The Listening Forest, and this kind of work, is that it makes space for both. 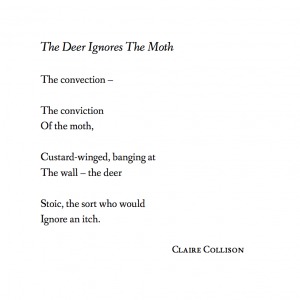 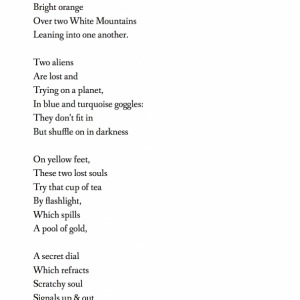 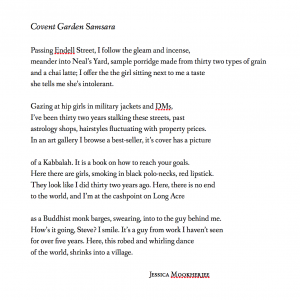