Shakespeare’s The Tempest contains a potent mix of the worldly (politics, power, parenthood) and the other-worldly (myth, magic, monsters). In the mercurial spirit Ariel and the earthy, ‘monstrous’ Caliban, elemental forces are given free rein to express their desires, while Prospero delivers some of the most famous lines in all literature:

These our actors,
As I foretold you, were all spirits and
Are melted into air, into thin air:
And, like the baseless fabric of this vision,
The cloud-capp’d towers, the gorgeous palaces,
The solemn temples, the great globe itself,
Ye all which it inherit, shall dissolve
And, like this insubstantial pageant faded,
Leave not a rack behind. We are such stuff
As dreams are made on, and our little life
Is rounded with a sleep.

In the central figure of Prospero, as Frances Yates suggested, we may see “not only the Magus as philosopher and as all-powerful magician ushering in the scientific age about to dawn, but also the Magus as creator of the theatre and its magic” – a figure in which we can recognize Shakespeare, the magician-artist, himself.

It is not surprising that this play would inspire W.H. Auden’s poem sequence ‘The Sea and the Mirror’, composed between 1942 and 1944: his interest in Freud (himself a keen reader of Shakespeare) would allow for a psychoanalytic interpretation of the magical figures; the political machinations and power struggles between the exiled ex-duke Prospero and his usurping brother Antonio (not to mention Prospero vs the witch Sycorax, Prospero vs Caliban, Prospero vs everyone who disturbs his peace) would be an attractive subject for a poet whose work of the 1930s was defined by the rise of Fascism in Europe. 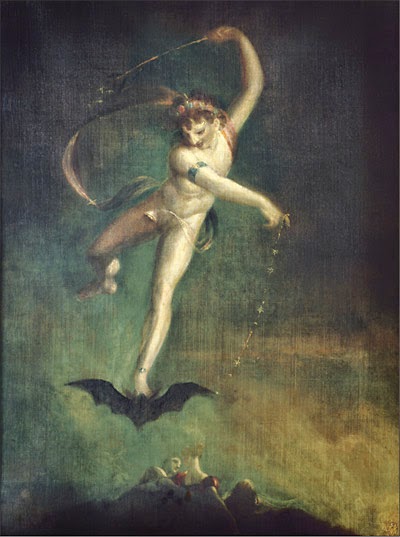 In ‘The Sea and the Mirror’, Auden gives the characters of the play new dramatic voices, new monologues, and in a wide variety of traditional forms: Antonio talks in terza rima, Miranda is given a villanelle, her suitor Ferdinand has a sonnet, the sailors sing a lively ballad, Sebastian works through his thoughts in a sestina, and Caliban – the unruly native who was taught English and learned how to curse with it – lets loose with fifteen pages of dense, rhetorical prose. Added to the mix are fine, delicate lyrics and prophetic declamations. It is a tour de force of ideas and invention.

In my online reading group we will first look at the poem’s context in relation to the play itself, so there will be opportunities to deepen or refresh your knowledge of Shakespeare’s text and to consider it from a different angle. A close reading of the poems themselves will reveal their contemporary significance – for Auden’s war-torn 1940s as well as our own times. Given the importance of traditional forms in this sequence, there will be optional creative writing exercises in which you can try your hand at these. The stage is set, the revels are just beginning:

O what authority gives
Existence its surprise?
Science is happy to answer
That the ghosts who haunt our lives
Are handy with mirrors and wire,
That song and sugar and fire,
Courage and come-hither eyes
Have a genius for taking pains.
But how does one think up a habit?
Our wonder, our terror remains.

Auden’s circle at Oxford University in the late 1920s included Stephen Spender, Cecil Day-Lewis (father of the actor Daniel Day-Lewis), and Louis MacNeice. Along with Christopher Isherwood they would define the politically engaged poetry of the era. Auden would go on to produce some of the most memorable lines in English poetry – the opening lines of ‘Musée des Beaux Arts’, for example:

About suffering they were never wrong,
The Old Masters: how well they understood
Its human position; how it takes place
While someone else is eating or opening a window or just
walking dully along …

His work has found a new popular audience through its appearance in film, most notably his ‘Funeral Blues’:

Stop all the clocks, cut off the telephone,
Prevent the dog from barking with a juicy bone,
Silence the pianos and with muffled drum
Bring out the coffin, let the mourners come.

At the time of writing ‘The Sea and the Mirror’, Auden was a full-time resident in America and teaching at the Swarthmore College in Pennsylvania; he had received the draft call to join the US Army in 1942 but was rejected on medical grounds. It was against the backdrop of the Second World War, while adjusting to a new life on new shores, far from the devastations of bombed-out England, that Auden turned to The Tempest for consolation and instruction. Could strife be resolved? Could the world be renewed? Was natural order a fantasy? Could people love one another? Significant questions demanded significant poems, and this was Auden’s task in writing ‘The Sea and the Mirror’.

Discover the mysterious world of Auden’s ‘commentary’ on The Tempest on This Enchanted Isle: reading Auden’s ‘The Sea And The Mirror’ with A B Jackson. This online reading group is an absolute steal at £15! Book your place now or ring us on 0207 582 1679.

What students have said about our online reading groups:

“This was a brilliant course … I would definitely do another”

“Academic and rigorous … it gives me access to ideas, articles and tutoring that I can’t get anywhere else”