Home » Blog » How I Did It – Ted Hughes Award: Jay Bernard on ‘The Red and Yellow Nothing’

In the next instalment of our Ted Hughes Award ‘How I Did It’ series, Jay Bernard explains the many inspirations behind their shortlisted pamphlet, The Red and Yellow Nothing, published by Ink, Sweat & Tears Press.

The Red and Yellow Nothing is written as a prequel to the Arthurian tale of Sir Morien – a young knight described as being “black from head to toe”, who rides to Camelot to find his father. In a story that moves across genders, landscapes and centuries, these poems meditate on the black presence in European art and culture, long before the invention of the divisive racial categories that exist today.

I wrote The Red and Yellow Nothing to see if I could write it.

If there’s one thing I’ve learned about myself and perhaps poetry in general, it’s that I often don’t know what I’m doing until I’ve done it.

And once it’s done, as in the case of The Red and Yellow Nothing, I often wonder why I did it and what I’m supposed to do next.

A few days ago I was with a friend, eating dinner, and she was talking about the fact that part of studying English is the experiential factor, which cannot be rushed or forced. We’ve both had the experience of suddenly waking up one day and understanding a theory or a line of poetry that previously we had not.

Suddenly, in a different context and backlit by experience, it clicks into place.

The Red and Yellow Nothing was like that. I didn’t realise what I’d written until I’d written it.

There are many influences. My introduction to the story begins with a quotation from Jessie Weston about the story of Morien in its current form – part of an idiosyncratic C14th compendium called the Lancelotcompilatie: “As it stands, the poem is a curious mixture of conflicting traditions.”

When I first started this project, I tried to be coherent. I tried to make it a neat confection of historical figures interacting with each other. And it didn’t work because the technical requirements of such a story are not neat.

The story itself isn’t neat, how could my interpretation seek to neutralise, formalise, make coherent?

You know when you go to Waterstone’s and someone has written quotations everywhere? One of my favourite, I see it often, is:

I no more remember the books I have read than the meals I have eaten. Nevertheless they have made me.

A garbled paraphrase no doubt, and I don’t remember who said it.

But I think it’s very true. It’s very much how I go about things, how I went about this book.

I’m a dork at heart. That can be good for getting the grades necessary to go to a fancy university, but it might also be a mode of repression, a way of hiding a deep desire for approval. I always want to write something coherent, something well-informed, something that a tutor might approve of. Possibly writing The Red and Yellow Nothing was a way to resist that urge.

Sing About Me, I’m Dying of Thirst by Kendrick Lamar

The song breaks down at the end of the first two verses and then a chorus begins:

When the lights shut off

And it’s my turn to settle down

That sense of things breaking down, of having no clear future – in Lamar’s case, young men and women, hustlers, sex workers, rappers trying to make it. I like his formal interruptions, the way he cuts short his own flow – with gunshots at the end of the first verse, a fade out at the end of the second.

I looked at the Child Ballads and used this version by Christy Moore for the first poem in the book:

And combined it with The Two Magicians. The extended vowels – siiiing, etc – came from this:

The latter song in particular is quite disturbing – about a man determined to take a woman’s maidenhead. Violent and strange.

In computer games, there’s a well known trope of floating platforms that fall away as soon as you jump onto them. Like in Mario:

‘Section VI’ in The Red and Yellow Nothing is a re-telling of a dream that has Agloval has in which he climbs a staircase that falls away as he walks up it. I present it as a double dreaming; both Morien and Agloval sharing the same vision. Mario was very much on my mind: 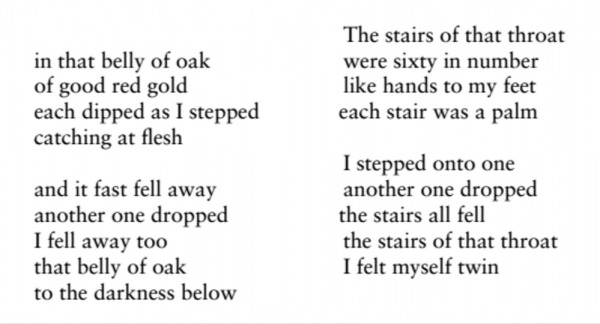 from ‘Section VI’ in The Red and Yellow Nothing

One of the barriers I knew I had to break down was the hierarchy of registers.

Many years ago Kayo Chingonyi and I had a conversation about rap and he made this very good point: Rappers can talk about the present in a way that literary writers can’t – we’re very anxious about it.

Other barriers? Gender, race, how the two combine. Y’know, all that stuff.

Rachel Dolezal has been a very interesting case to follow since the publication of The Red and Yellow Nothing.

Some people find her very uncomfortable. The idea that we can separate race and biology is difficult. Even though that is precisely what we need to do in order to move beyond the racist twining of skin colour and social status. That indeterminate space is contested. If Rachel Dolezal could prove she has one black ancestor, somewhere along the line, even five or six generations ago, she might have some claim to blackness. Her Nigerian name antics might still garner some side-eye, but the conversation would be different. And that, friends, is the one drop rule. A racist rule which still governs our thinking.

Morien isn’t strictly analogous to Dolezal (obvs), but he is a completely black individual who returns to Camelot to find his white father. One drop rule? Or something else?

Maybe something other than what we’re used to.

There’s a prize at the moment for anyone who can prove that reality is a simulation. Sometimes I think identity is a kind of simulation.

There’s also this idea in physics that we know time moves in a particular direction because of entropy – things decay and become diffuse – and maybe that’s another way of describing how I approached this pamphlet and the story of Sir Morien. Things are always breaking down and building back up. But right now, the dominant sense is that things are breaking down.

For myself, for others, for anyone who reads this book.

My old tutor once wrote a comment on an essay I’d written that made me very proud. That I don’t so much leap from idea to idea but grab the reader by the scruff of the neck and completely disorient them.

The irony is that I wrote this pamphlet several years before Brexit, Dolezal. My inside did not match my outside for a variety of reasons – not because I was “born in the wrong body” or anything like that, but because the ideological foundations of gender no longer made sense; the idea that x genitalia = y gender role is unbelievably stupid. So stupid it is disorienting. And the same can be said of race. X skin colour = Y race. Right.

But it’s what we have. And it makes up our material reality. So it’s tricky.

To unravel these deeply entwined ideas is not without its dangers. Which is why I say The Red and Yellow Nothing is an experiment. Ultimately, I’d like to write something else, an extension of the concept.

Of course, the hardest bit is not the unravelling but the task of putting things back together.

Particularly when these extremely powerful categories are within living memory; when it’s hard to live without them; when living without them seems impossible.

The urge to stop and return to the shore, to that which is concrete, known.

But by now we might be more than halfway.

You can buy The Red and Yellow Nothing by Jay Bernard from Ink, Sweat & Tears Press website.

Jay Bernard is a poet, writer, and film programmer. Their published pamphlets are Your Sign is Cuckoo, Girl (tall-lighthouse 2008), English Breakfast (Math Paper Press 2013), and The Red and Yellow Nothing (Ink Sweat & Tears Press 2016). Jay’s poems have also been collected in The Salt Book of Younger Poets (Salt 2011) and Ten: The New Wave (Bloodaxe 2014).