Home » Blog » How I Did It: Forward First Collection Special – Nick Makoha on ‘Kingdom of Gravity’

We’ve asked the five poets shortlisted for this year’s Forward Prize for Best First Collection to write about the process behind their award-nominated work. Over the weeks leading up to the award ceremony on 21st September, look out for ‘How I Did It’ articles from Maria Apichella, Richard Georges, Eric Langley and Ocean Vuong. But this week it’s Nick Makoha.

The book Kingdom of Gravity has gone through many iterations. Initially the working title for my book was The Second Republic (this is what Uganda under Idi Amin’s rule was to be called under the new constitution). It took a while before I could say I was working towards a collection because that would mean I was committed to a life as a poet, something I had not yet reconciled in my heart. In 2005 I published my 1st pamphlet called the The Lost Collection of an Invisible Man. Looking back at the pamphlet now I realise that those poems were a signpost to the book I have before me today.

As a writer at that time I was often told that I had potential, but in truth I lacked sufficient skill or craft to deal with the complex subject matter of Kingdom of Gravity. There were many rivers running through me. I was a Ugandan in the diaspora who had already lived in four different countries thrice over. I felt fractured and fragile but often lacked the courage to confess or express this in my work.

There were several writing communities I leaned on to help me develop. Malika Booker is the founder of Malika’s Kitchen, a writing collective that encourages writers from the margins to build craft through regular workshops, readings and mentorship. As an active member I was helping Malika run the Kitchen; our curriculum ran three ten-week semesters on Friday nights at The Poetry School.

It was at one of these sessions that we decided as a collective to go on our first writers’ retreat at Arvon Totleigh Barton. Space was limited: only sixteen of us would be able to go along with the founders Roger Robinson and Malika. Our tutors were Malika’s mentor, poet Kwame Dawes, and author Leone Ross. In my 1-2-1 session with Kwame Dawes, he asked a profound question. What is your purpose, to obscure or reveal?

That question coupled with the fact that I was at Arvon, a place that removed you from the distractions of society seemed to release a new way of looking at my work. I noticed that all my poems where acting to hide my identity. I was born in Uganda living in London and not feeling at home in either location. T.S. Eliot spoke of this experience of being a Metic, of his discomfort of being a resident alien. The term Metic refers to foreigners or resident aliens whose allegiances are split between their homeland and their new country.

It was at Arvon that I decided to unpack some of these complex feelings in my work. In many ways I realise that my exodus from Uganda because of the Idi Amin regime made me the writer I am today. Kwame Dawes suggested I start by piecing my story together. I read books, spoke to relatives, gathered artefacts and newspaper articles. I realised in my research that in the Western Narrative much of my Ugandan identity is lost. The only part of the narrative that is kept alive is that of our country’s dictator, Idi Amin. This was a stumbling block in my writing as I did not know how to make the reader see past this larger than life character. Bill Herbert gave me some great advice when he said All language and all communication is a translation and that is our purpose as a poet, not just to deliver content but also convey and extend meaning. In Jo Shapcott’s workshop, she describes this as Qualia or the dimension of the present moment. You experience it when the smell of a vanilla pod takes you back to a personal memory. It was clear that the physical manifestation of the poems had to take me back to a memory. Thus the direction for the poems and the book was born.

I have lots of notebooks filled with sketches, not of pictures but words. A line in a poem is like a chord of music. So during my day I try to capture these chords. Sometimes it might be a life lesson or an errand I have to run for the family or a hook from a song. Individually they mean nothing but during the course of a season these chords gather. The title poem ‘The Kingdom of Gravity’ started off as a sketch that I wrote on the back of a postcard. The original postcard got discarded. I usually write my notes out again an again. But here are some of the sketches recreated. If you look to the bottom right you will see part of the poem. That line plays in my mind like a loop

Look at the thoughts that came from that. Midnight made me think of the jazz standard ‘Round Midnight‘. Thelonious Monk, Chaka Khan, Amy Winehouse all have their version. Chaka Khan’s version is best. Her and Kanye West are linked by the song ‘Through the Wire‘. My favourite line is Make music that’s fire, spit my soul through the wire. The TV show The Wire works because it makes the city rather than people the main character. I am wondering if I can do the same thing with Uganda, hence the query is: who am I in relation to the Nile? The Nile is constant and starts in Uganda. I am Ugandan and start in Uganda. Then the lyric leap. Am I the hawk? Note that this thought pattern does not occur at the same time, but I try to put them on the same page so that when I sit at my desk a first line will emerge. 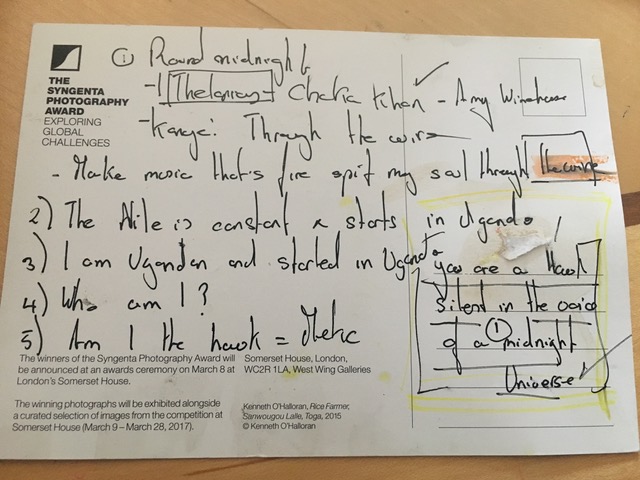 The last piece of the puzzle was craft. A poem is a world unto itself of land, sea and sky or lyric, narrative and persona. I can remember the night I wrote this poem. I was at the Cave Canem writing retreat in Pittsburgh, it was four o’clock in the morning and the poem was coming out line by line. All I had was this postcard and some poetry books as company. The first line that came was ‘We are not Alexander’. What is remarkable is that, as you the read the poem, you, the reader, become me. A translation is happening. The lyric and the narrative are working to give you the qualia of my persona. What I realised is that if you can enter my persona then you can enter Uganda. Or as Stanley Kubrick said:

“Sometimes the truth of a thing is not so much in the think of it, as in the feel of it.”

So my pieces involve sketch notes that can take months to form, an original draft and then a final draft

The Kingdom of Gravity  – Final Draft

We are not Alexander, who conquered worlds
giving them new tongues, but we share the story
of a ship resting on an African river, unbuckling
at its shore, awakened by the night’s cold hard rain,
staring at the face of the Nile as it reminds you

What makes a man name a city after himself,
asking bricks to be bones, asking the wind
to breathe like the lungs of the night,
asking the night to come closer, to speak
to  you as a tribe, asking the tribe to sleep,
asking sleep to loosen its language, asking
language to dream? Come close to me.

Can you not see that I am in search of fire,
the unshapen song of light? In my mouth
is a name hovering like smoke, spoken to me
by the oracle. Like others, I was in search
of a forest, a place to call home.

But what can I tell you about Kingdom,
about having the world at your feet?
When you have seen all the earth’s boundaries,
you will crave for mirrors, searching for them in streams,
and when the river looks back at you
how will you be sure that nothing is lost?

The Kingdom of Gravity  –  Old Draft

We share the story of a ship resting
on an African river, unbuckling its shore,
awakened by the nights cold hard rain.

Can you not see
that I am in search of fire?
The unshapen tongue of light.
In my mouth is a name
hovering like smoke, spoken
to me by the oracle.
I was in search of a forest,
a place to call home.

What makes a man name a city after himself;
shape bricks to bones, turn wind to breath
like the lungs of night, to speak to  you as a tribe,
compel your fear to sleep, ask sleep to loosen language,
make language dream. Come close to me.

What can I tell you about Kingdom,
about having the world at your feet?
When you have seen all the earth’s boundary,
you will crave mirrors, search for them in streams.
and when the river looks back at you
how will you be sure that nothing is lost? 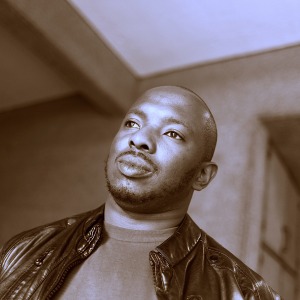 Image credit: ‘African Cuckoo Hawk‘ by Ragnhild&Neil Crawford. A filter has been placed over this image. Licence.