Home » Blog » How I Did It – Eric Gregory Award Special: Richard O’Brien on ‘4 Rue Sarrazin’

Welcome to the first instalment of our Eric Gregory Award 2017 ‘How I Did It’ series. We asked the winners of this year’s awards to explain the process behind one of their award-winning poems. First up, Richard O’Brien writes about ‘4 Rue Sarrazin’. The Eric Gregory Awards 2018 will open for entries in September.

A number of the poems in my submission for the Eric Gregory Award took as their subject historical or fictional characters, but it’s probably uncontroversial to admit that most of these were about myself in some way or another: my fears, my neuroses, my concerns.

Imagining a poem in the voice of Richard Cromwell (Oliver’s dweeby, disappointing son) gave me a way to explore some aspects of my relationship with my own father. Writing about Mad Men’s elegantly cruel Roger Sterling helped to scratch what has become a familiar itch in my writing: how to make sense of the privilege of my position (white, straight, male), and how to critically assess the effect those qualities have on easing my passage through the world.

Despite this confessional streak, in the last couple of years I started to feel that I had only ever written about myself through lenses and mirrors. Though I don’t believe that the least apparently chiselled poem must by default be the most revelatory (take Tony Harrison’s ‘Them and [Uz]’), I knew that my frequent use of traditional forms might sometimes be a kind of refuge, a defence against disclosure. It’s rare that I find myself wanting to begin a poem without my familiar creative (and emotional) support structure, but these days I’m also constantly writing in the awareness of what Sandeep Parmar has persuasively identified as a ‘low-risk game of truth and meaning’ in ‘the conservative, mainstream British poem’. These, then, were the kinds of concerns worrying at the back of my mind when I started work on a sequence titled ‘Closed Doors’, for which ‘4 Rue Sarrazin’ was perhaps the third or fourth poem written:

In the top floor flat, Nantes, Rue Sarrazin:
a couch with orange cushions no one chose;
the floor (stone, somehow?) cold against my toes;
a kitchenette I’ll never use again.

There was a cupboard lined with bathroom tiles
our jovial, vague landlord tried to fit
a shower in: the plumbing wouldn’t stretch
that far, he told us once, after a while —

so there they stayed. Johanna had a map
of Europe, countries marked with playground slurs,
and though I almost never spoke to her,
one day I came back from a weekend trip

to find the condoms missing from my wardrobe.
The wall pitched steep above my bed; a window
looked on the never-open church below,
roof ringed with angels. I left without a note.

My intention behind the sequence was, roughly speaking, to piece together from a series of situated memories how I became the person I am today. I was thinking to some extent (if I recall correctly…) about verse autobiographies like Byron’s Childe Harold’s Pilgrimage and Auden’s response in Letter to Lord Byron, and I especially liked the latter’s mix of the literary and the mundane. I wanted to risk some degree of personal confession (as Sandeep Parmar’s quote might suggest), without the project turning into what Luke Kennard, when I interviewed him for Prac Crit, described as ‘a kind of propaganda of the self.’

‘4 Rue Sarrazin’ is the fourth of the poems chronologically, and what connects them is that each, except the last one, is set in a room from a previous period of my life that I now can’t go to: friends moved out; I moved on; I no longer have any reason to be at a party in a French secondary school. One of the epigraphs, from my favourite musician John Darnielle, explains the motivation behind turning over old stones. Commenting on his song ‘Genesis 3:23’, a fictional – at least I think so? – account of breaking into his own old house, he tells Pitchfork: ‘Every place that you left is Eden in some way.’

This quote set me thinking about these inaccessible rooms as dividing lines – ways of marking off certain periods of my life – and thinking about what I had or had not learnt in the aftermath of leaving them behind. In this case, I was summoning up one of the two times I’d lived in Nantes, a city in the west of France, when I was twenty-two and working for a local radio station. Some of the ‘Closed Doors’ poems are far more self-critical, driven by quite a powerful sense of shame at what I was doing, thinking, and writing at those stages of my development. There’s less outright flagellation here, but you probably should say goodbye to your roommate when you leave a flat you share, even if you don’t like each other very much.

I can’t say I was explicitly thinking of the etymological connection between stanzas and rooms, but the boxing off of my experience bears some relation to Edna St. Vincent Millay’s sonnet of demon-taming:

I will put Chaos into fourteen lines
And keep him there . . .
Till he with Order mingles and combines.

My poem isn’t a sonnet, though it’s not far off. It’s a rough form I use across the sequence, probably ancestrally inspired by examples like John Berryman’s Dream Songs and Michael Symmonds Roberts’s Drysalter (a book which, in the poem’s spirit of honest self-accounting, I have not finished). ‘Closed Doors’ is partly a sequence of poems about memory and its fragility, albeit shored up, as usual in my work, by some kind of protective formalist buffer. As such, the half-rhymes, and the rhythmical stumble at the end, for me are of a piece with the content of the poem – they have a certain wooziness, an air of the haphazard rather than the fully-organised.

I’m almost always tempted towards full rhymes and the most regular metre possible, and quite often have to wrestle myself away from it in the service of doing anything interesting. Doing a PhD on metrical variation doesn’t seem to have made this any easier. But a Muldoon-y rhyme like ‘fit’ and ‘stretch’ draws attention to exactly the kinds of things I’m hoping to say about memory here. It also has the bonus effect of mimetically evoking my landlord’s abortive shower which, like all of this, really happened. Sometimes form is like that too. Sometimes it all falls neatly into place, like a beautiful fitted bathroom, and sometimes you feel like a lackadaisical, middle-aged French man who spends his weekends on a sailing boat and never answers the phone, trying to wedge a branch pipe into an attic cupboard.

Having claimed I wanted my poems to reveal myself more directly, I should address why ‘4 Rue Sarrazin’ is mostly about furniture. Essentially, I felt something more honest in the way of autobiography might emerge from a more oblique take, from trying – in the manner of an automatic writing exercise – to simply remember and note down exactly what was around me during the months I lived in this building, and to acknowledge the gaps in my memory and the observations of self which arose when I actively tried to make things come back to me. How often do attic rooms have stone flooring? And if it didn’t, then why do I have such an incongruous sense memory?

I was also interested in the impersonality of the rooms I’d spent time in, as contrasted to what might be my bourgeois assumption of having some kind of stable perceiving self. I liked to think about the fact that these ugly orange cushions predated me, and would continue to be grudgingly interacted with by other tenants after I left. I hoped that I might emerge, as a kind of composite picture, from these things which other people had assembled around me for reasons which had nothing to do with me. Somewhere in my mind, too, were the French nouveaux romanciers I studied as an undergraduate, like Nathalie Sarraute and Alain Robbe-Grillet (whose influence on Darnielle’s work I wrote about before the events in this poem even happened) – their ability to evoke the substance, the sheer thereness, of things. And I also wanted this to be a matter of record, a way of transcribing – in whatever altered, filtered form – what had actually happened in my life, without too much overt poeticising or explicit self-judgement.

Beyond that – and this is perhaps my most old-fashioned admission of all – I wanted to give enough visual detail for the reader to be able to be imagine they were actually there; to have the place in mind, and perhaps simultaneously some of the bittersweet knowledge that I felt about its essential lostness. That said, ‘the reader’ could always go and ring the doorbell. But it’s probably best not to mention my name, if you do. 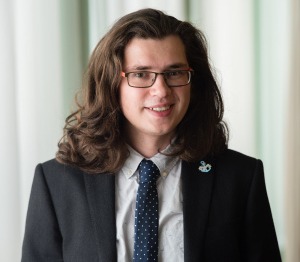 Richard O’Brien is a Teaching Fellow in Creative Writing at the University of Birmingham, and a PhD researcher at the University of Birmingham’s Shakespeare Institute. His poetry has been published by the Emma Press (The Emmores, 2014) and Valley Press (A Bloody Mess, 2015). His first play for children, an adaptation of The Selfish Giant, premiered at London’s Arcola Theatre in 2016. In 2017, he was one of six winners of the Society of Authors’ Eric Gregory Awards for a collection of poems by an author under thirty. www.richardobrien.co.uk

Cover Image: 19th Century Map of Europe by Paul Simpson. A filter has been placed on this image. License.