Home » Blog » How I Did It: Eric Gregory Award Special – Rachael Allen on ‘Many Bird Roast’

Welcome to this ‘How I Did It’ series featuring the winners of the Eric Gregory Award 2017. We’ve asked each excellent young poet to explain the process behind their award-winning writing. Here, Rachael Allen talks about one of the recurring themes in her work. The Eric Gregory Awards 2018 will be open for entries in September.

I am thinking a lot about animals recently. I have always thought about animals a lot, I think everyone probably does. I am nothing special, most people look at animals every day, if not in the real world, we send videos like this to each other daily.

But I have been thinking especially about the weird position of animals in our animal-eating culture, as I am attempting to write a small account on animals in poetry.

But what specifically have I been thinking about animals as I have been writing some of the poems included in this manuscript? It is difficult to write a how-to on a poem, but writing about things that have informed a poem seem easier. I know that while I have been writing poems my cat is often hanging around me like a clingy acquaintance, badly pretending she’s not desperate for my attention. A few times a day she will jump up on to my desk, push a couple of books on the floor and then leave.

I had a cat when I was younger, buck toothed from a car accident with a limp and asthma who hung on, wheezing and dragging her legs around, until she was about 20. I didn’t think I’d have another cat again. I went through a phase of not agreeing with pets. Sometimes when I look at pets I get sad, especially certain kinds of popular dog, some so anatomically wrecked they struggle to breathe through their flat mouths, or keep their own bulging eyes in their heads. They’ve done nothing wrong, but sadly are one of the more visible reminders of the corrupting nature of human impact on basically everything.

When my cat is wending her way around me in the morning I think about the first cat that figured out butting a human’s legs in this way would give it the reaction it wanted (food) because it professed what was, unbeknownst to the cat, a form of human affection. I know my cat doesn’t love me in the way I love her, her ‘affections’ are a bastardised version of the actions she’d perhaps share with her cat-mother, deep rooted now to share with me via evolutionary habits in order to get food. Maybe.

I can’t ever say why my cat does what she does, and I don’t believe in hierarchising an animals’ intelligence using the gauge of how similarly they act to humans. Just because an ape acts like us, is it more ‘intelligent’ than an octopus, a creature that can sense colour through its skin while being effectively colour blind? I believe in trying to understand animals on their own terms, outside of human-centric ideas of thinking, which I also realise is impossible. I am under no illusion that the deep, obsessive, human love I have for my cat is reciprocated, but I don’t care, she’s amazing.

Would I eat my cat right now? Would I eat my cat if I was really hungry and had run out of food? Would I be able to place a bolt gun to the side of her head, shoot her through the skull then remove her hair, her skin, roast her meat, and perhaps eat shredded bits of her in a salad? As I write this, she’s looking at me through narrowed eyes, like she knows what I’m thinking, but which actually, google tells me, means she loves me. And we do have a bond. I’m not sure it extends to telepathy, but it’s a bond; that doesn’t mean she loves me in the way I love her, but it does perhaps protect both of us from being eaten by the other.

Well, given half the chance, she probably would eat me, if I was prepared correctly. If she was fed a bowl of meat, and that meat was made up of my flesh, I don’t think she’d turn her nose up. If I ate meat, and I was given a bowl of ground up cat in a restaurant, and I didn’t know what it was or if I had been told it was something else, there’s a good chance I’d eat that, and it could be her. And that feels like a pretty corrupted form of an animal.

You can attempt to explicate bits of a poem, but I don’t think you can ever say what a poem’s totally about. This poem starts with, among other things, Turducken, which is perhaps the most corrupted idea of the animal I have ever encountered. This poem is also a bit about how difficult it is to talk about eating animals. Some people need to eat animals, some people don’t want to think about eating or not eating animals. Vegans have a bad name. Which is perhaps understandable at times. Who is anyone to tell someone else what to do? Some vegans do that a lot. And I don’t see this poem as about veganism, I don’t know what it’s about. When I wrote it I was considering where animals sit in our society and how they exist.

Visibly: they are cartoons, they are our very special companions, they are a cute and sneaky chameleon on YouTube washing its hands. Invisibly: they are our meat, food and drink, they are our corrupted projects, our shoes and our handbags and jumpers. What happens in the gap of this dissociation – to eat one animal, caress another? How many animals suffer invisibly, how many live visibly, only positioned as such because of their adaption or cultural significance to us. These are some of the things I think about when I write poems about animals; I and my cat remain uneaten.

I came in, dandy and present
arguing for a moratorium on meat
of the kind splayed out on the table, legs akimbo
like a fallen-over ice skater skidding on her backside
there are dogs in the outhouse and all over the world
that we do not eat
and one small sparrow in a pigeon in a grouse in a swan
that we will certainly eat
overlooking all the drama, with as many eyes as a spider
that we’ll cut in two
and the compacted layers of the various meats
will fall away dreamily as a rainbow melts down
into the marsh where it came from
slipping meat from the bone
onto a specially designed knife
there’s a call out for plates
I’m the only one with a sense of outcry
someone says, you weren’t like this when it was broiling away
smelling like your history, smelling like
the deep skin on your knee grazed after playing in the sun all day
skinned with good dirt and your under-blood just showing through
smelling like warm dry firs after burning and the outdoors
after fireworks and Novembers after tea
you eat and smell like the rest of us, dirty rat under your armpit
dirty bird in your stomach
and birds fell down through the chimney with thwacks into buckets
and we got so poor we had to eat them too
strange cockatoos and once a brilliantly lit pure white dove
that we kept in a hutch with a small pot of ink
and when we let it out
it wasn’t so much a raven as just a plain black dove
ready to cook, and with superstition, I learnt to. 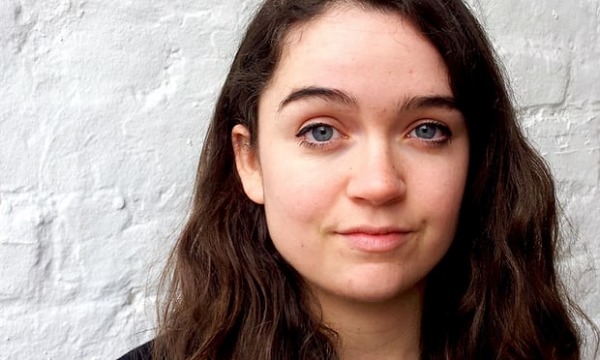 Rachael Allen is poetry editor for Granta. She is also co-editor of independent poetry press clinic  and the online journal Tender. A pamphlet of her poems was published as part of the Faber New Poets series. She won an Eric Gregory Award in 2017.

Cover Photo: Richard Croft. A filter has been placed on this image. License.