Home » Blog » How I Did It: Forward First Collection – Shivanee Ramlochan on ‘All the Dead, All the Living’ from Everyone Knows I Am a Haunting

Welcome to the second instalment of our Forward Prizes First Collection ‘How I Did It’ series. We asked the poets shortlisted for this year’s Felix Dennis Prize to explain the process behind one of their award-shortlisted poems. Shivanee Ramlochan talks about the wondrous experience of attending Carnival in Trinidad and Tobago, which sparked her poem, ‘All the Dead, All the Living’. The Forward Prizes ceremony will take place on 18th September.

Carnival in Trinidad and Tobago is beyond your imagining. I don’t mean you, foreigner. I mean anyone who hasn’t apprenticed themselves to the mas, in some capacity, vast or miniature, cannot project an understanding of Carnival until they have immersed themselves in it. In truth, Carnival’s proudest and most ingenious veterans, wielders of wire and whip and feather and bois [1], will all tell you: you must be in the mas to know it. You can be in the mas your whole life, and never know it in full. This great induction into mas, and the relentless mystery of all its parts, is the bedrock of ‘All the Dead, All the Living’.

What is mas? In simple terms, to ‘play mas’ is to mount or wear a type of costume, and to parade in it in the streets during Carnival time. Yet I confess I shudder as I try to explain this to you. A dictionary definition strives for clarity, but what you lose in this standardized response is the heat of the sun on your face as day breaks, the weight of your headdress of ten thousand stitched sequins, the way men might still weep as they tell you about the first time they play mas with Minshall[2], or touch the road Jouvay[3] morning in 3canal[4] band, anointed in mud and blue paint.

I’m new to Jouvay, and each time I’ve played, I’ve taken to Facebook the day after, my nails still stained with abeer, my hair knotted and my thighs aching from hours of unaccustomed road bacchanal, to write about how the mas makes me feel. ‘All the Dead, All the Living’ began its life as a 2017 Facebook post, which you can still read online. At the time of its writing, I didn’t think of this as a poem, nor did I expect it would be part of Everyone Knows I Am a Haunting, which was in its final stages of fine edits and sequencing. So how did this Facebook post, still glowing with post-Jouvay buzz, incarnate itself as a poem?

The advice of a fellow Caribbean poet whom I love and admire, Loretta Collins Klobah, is one of the chambers at the heart of this alchemy. Loretta, commenting a year earlier in 2016 on my very first Jouvay post, also shared on Facebook, called it ‘one for the forthcoming collection’. I was delighted and surprised by her suggestion. I normally don’t think of cannibalizing my social media essays, which I think of as a form of cultural and archival commentary, for poetry. But I couldn’t ignore Loretta’s counsel, which was brief and bold: ‘little more mud, little less editorial, it goh be great. dohn work it to death, though. It’s a living throbbing thing now’. Ultimately, I didn’t work the 2016 post into a poem, but 2017’s beckoned to me to reconsider its parameters, and its possibilities: to trust in the variegated potential of what it could do, say, and stand for.

I set the text in a blank document and spent two days hammering out its poetic lineation, taking care to break the lines so that they flowed, yet maintained something of the original rhythm of the prose post. When I doubted my choices, I read the lines out loud, and followed the natural intuition of my voice as a cue to break the line cleaner, better, more decisively. I have always favoured long lines in poems, which has made me vigilant about their existence: why is a line this long, and no longer, or no shorter? I asked myself these questions as I formatted this poem, til I had answers that satisfied me, and cohered to a vision of the poem’s meander, narrative arc, and mud.

Yes, mud. Loretta’s words about mud over editorial stuck with me: I didn’t want to sanitize this poem, render it particularly palatable for a non-Caribbean, non-Trinidadian, non-Tobagonian audience. Many of the words in ‘All the Dead, All the Living’ will be unfamiliar to foreign readers. I did not provide dictionary definitions for them in the collection, nor will I do that here. To do this, I felt, would be to rob the sensitive reader of her own chance for full immersion. You do not, after all, stumble into our Carnival with a guidebook in hand, seeking illumination… or if you do, you will set it down to pick up something better: a beer, a banner, a conch-shell, the hand of a new friend or beloved stranger. You cannot learn Jouvay, or any part of playing mas, from text.

By this reckoning, you can’t learn it from my poem, either. Which is okay, because I’m not trying to teach anyone Carnival in ‘All the Dead, All the Living’. All I’ve done here is to crack some daylight on one of the world’s sweetest, hottest, most ineffable mysteries, and invited you in.

[1] Sticks, wielded by stickfighters, who duel each other in the ‘gayelle’, or ring/arena. Stickfighters are also called ‘bois men’. Stickfighting is one of T&T’s oldest Carnival arts.

[2] Peter Minshall, one of T&T’s veteran mas men and innovators, also credited as the inventor of the ‘air dancer’.

All the Dead, All the Living

At Jouvay, it eh matter if you play yourself
or somebody else.

Play your dead eighty-year-old granny,
who had tongue like scorpion pepper,
two foot like twinned fishtail in Caura River,
a smile like a butterknife cutting through hot sada.

Play your living mother,
who made of more parts glitter than flour,
who teach you softness have more than enough space
to leave a cutlass waiting,
glistening between fat folds,
ready to chop yuh from a bed of ample waist.

Play all the dead and all the living in you,
in yuh shortpants,
in yuh badjohn drawers,
in yuh ragged fishnets and curry-gold battyriders,
in yuh half-top, in yuh no-top,
breasts swinging under electric-tape nipples,
panty forgotten in a culvert overflowing with holy water and hell liquor,
your own perspiration sliding between bodies at play
like the wetness from your body is purgatory-unction.

Play like you eh playing in your public servant office on Ash Wednesday,
calves aching and twitching in sensible slingback heels,
a pulse in your lower back blossoming
each time you bend down to file a papers,
salute a clerk,
say grace before ashes.

You know where you are, really.
Just how you know the clerk is a chantwell,
the office is a concrete antechamber before the final mas,
the pavement is a busshead-convergence,
the parking lot is a gayelle,
the savannah is a arena where paint and abeer might wash,
but spirit does linger.

You eh waiting til next year.
Where you plant yourself this Jouvay
is where your spectral, midnight lagahoo rattling she coffin,
turning wolf
to woman
to wolf again. 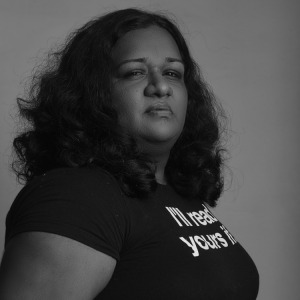 Shivanee Ramlochan is a Trinidadian poet, arts reporter and book blogger. She is the Book Reviews Editor for Caribbean Beat Magazine. Shivanee also writes about books for the NGC Bocas Lit Fest, the Anglophone Caribbean’s largest literary festival, as well as Paper Based Bookshop, Trinidad and Tobago’s oldest independent Caribbean specialty bookseller. She is the deputy editor of The Caribbean Review of Books.