Home » Blog » How I Did It: Forward First Collection – Kaveh Akbar on ‘HERITAGE’ from Calling a Wolf a Wolf

Welcome to the third instalment of our Forward Prizes First Collection ‘How I Did It’ series. We asked the poets shortlisted for this year’s Felix Dennis Prize to explain the process behind one of their award-shortlisted poems. Here, Kaveh Akbar talks about the devastating real-life event behind the poem ‘HERITAGE’. The Forward Prizes ceremony will take place on 18th September.

Reyhaneh Jabbari, a 26-year-old Iranian woman, was hanged on October 25th, 2014, for killing a man who was attempting to rape her.

I ‘wrote’ the first draft of this poem just days after reading a news story about Jabbari’s execution. In a fugue of grief and confusion and hopeless impotent anger, I found a final message she’d given to her mother. It was and is one of the most devastating texts I’d ever read. It ruined me completely. I knew I wanted to speak to her story in some capacity, but I didn’t know how. I thought maybe the secret was in using Jabbari’s own words. I worked all day on an erasure of that final letter, creating the poem ‘LONG POLISHED NAILS’. Exhausted, I looked at what I had at the end of the day and felt an indescribable but overwhelming offness. I wasn’t sure what it was – at the craft level, I was more or less satisfied with the poem – but something at its core was fundamentally and essentially incorrect. I realise now I was reacting to the wrongness of the whole impulse – why was I erasing the language of a woman who had already been violently erased? Why was I stealing her last earthly possession, her language, from her? I set the poem aside to move fully forward into my grieving.

Over a year later, I still hadn’t revisited that erasure, though I thought often about Jabbari’s horrible story. One morning going through my standard morning writing routine, I noticed a few familiar phrases creeping into what I was writing. I thought maybe I was remembering something I’d read recently, but I couldn’t place the phrases. Google was no help. I searched through my old drafts and realised I was unconsciously pulling language from my ‘LONG POLISHED NAILS’ erasure. That morning, my brain was finally ready to write a poem for Jabbari. ‘HERITAGE’ came out basically in its current form within the next couple hours. It’s still an excruciating poem for me to even look at, and I’ve only read it in front of an audience once, to a very particular group. But I wanted to write this to speak about the whole process, how careless I was in my early wrongheaded attempts at erasure, and how time and faith in the process of grieving saw me through to a small measure of closure. A poem for Reyhaneh. 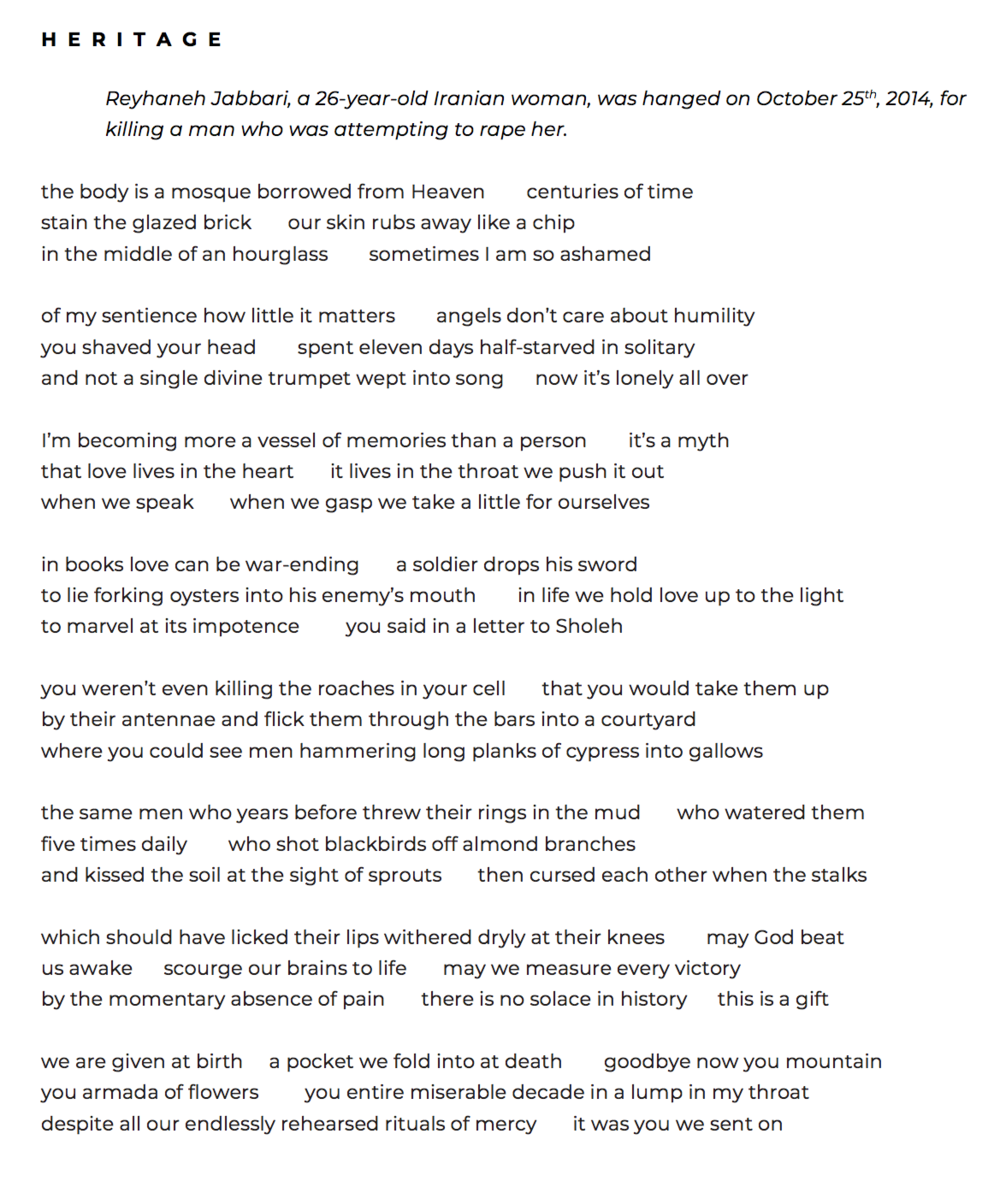 This article was originally published in The Ninth Letter. 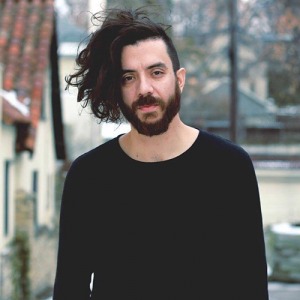 Kaveh Akbar‘s debut, Calling a Wolf a Wolf, is shortlisted for the Forward Prize for Best First Collection. He is the recipient of a 2016 Ruth Lilly and Dorothy Sargent Rosenberg Fellowship from the Poetry Foundation, a Pushcart Prize, and the Lucille Medwick Memorial Award from the Poetry Society of America. Kaveh was born in Tehran, and currently teaches at Purdue University and in the low-residency MFA programmes at Randolph College and Warren Wilson.

A filter has been placed over this image