Home » Blog » How I Did It: Eric Gregory Award — Stephen Sexton on ‘Daydream of the Jacket’

Welcome to our Eric Gregory Award 2018 ‘How I Did It’ series. We asked the winners of this year’s awards to explain the process behind one of their award-winning poems. In this piece, National Poetry Competition winner discusses ‘Daydream of the Jacket’. The Eric Gregory Awards will close for entries on the 31st of October, 2018.

About three years ago, I was walking through Belfast city centre one Tuesday afternoon. I called into a grocer’s on account of the baseball-sized bulbs of violet garlic they stock there, and bought a couple and ambled into the Barnardo’s next door (whose founder, Thomas John Barnardo was not – I learn from Wikipedia – a Jack the Ripper suspect) to go through the old LPs and almanacs and ancient, never-out-of-the box PC peripherals and tedious bric-a-brac and obscure paintings of boats or wonky-faced horses in brass-ish frames and so terribly many boxes of men’s handkerchiefs and general, dusty, unlovable junk.

There’s hardly ever anything there you’d even consider, except for the occasional spectacle of something like a knockoff Hammond organ you could convince yourself you have the space, necessity and ambition for. Time seems to flow along different channels in the charity shop, though one supposes it’s generally the case that the present is just a compromise between the past and a future. Anyway, when you’re there, you’re eyed with great and polite suspicion by the woman who volunteers, I expect, behind the counter.

I know it’s about three years ago because the first draft of this poem is dated September 2015. I’ve learned a lot about this woman over the years I’ve called in, since I overhear the conversations she always seems to be conducting with people waiting for buses who choose to pass a few minutes in the shop. I know which kinds of country and western music she doesn’t care for, and what she thinks of the way men wore hats in the 1950s. On the Tuesday I stepped in, I found a Houndstooth jacket I didn’t know I was looking for, paid next to nothing for it, stepped out onto the street, and put it on. I continued on to a supermarket next to the Bank Buildings which housed Primark, and which was recently devastated by fire. I didn’t appreciate the handsomeness of the building then, but things change. In the supermarket, I went through the pockets of my new jacket and was bemused to find a shopping list in the inside breast pocket. I couldn’t make sense of how it was there, post-dry clean. I couldn’t know if it had been fulfilled, and I couldn’t know who once owned the garment I was wearing. I wondered who this person was, and what the consequences are – imaginatively and politically – of wearing someone else’s clothes.

Sometimes, reading a poem, there’s the feeling that you’re engaged with another person’s consciousness: you spend time with their language and the art they’ve made of it. You come back to yourself, though, at the end of the poem, changed in some way, even if it’s just because you’re a little older. And more than the empathetic act of participating in a writer’s imagination, you’ve spent a (hopefully very) small fraction of your life with their work.

At an exciting talk about poetry and painting put on by The Open University in the Ulster Museum a few months ago, I was reminded of Gotthold Lessing’s contention, which I’ve paraphrased mercilessly, that poetry is an art of time and painting is an art of space. I think often about how a poem is a measure of time, and what it means to share that time with someone: an author, a reader, and how that sense of time is variable and elastic. With this poem, ‘Daydream of the Jacket’, I wanted to think of the particular metaphysics which can be employed in a poem, and the strange sort of introspective time one experiences when one thinks about being younger or older. In the poem, in my mind, about 50 years passes over the 20 lines. The speaker is literally transformed, by time, into himself.

It’s my ambition in the poem to wonder about that sense of time, and by extension to thank any kind person for reading it, for sharing that part of their life with some aspect of its silliness or its sadness. The end of the poem surprised me, and I was stuck for a long time without the last two lines.  I think I’d settled into the quatrain by then, and was fairly sure that was the shape I wanted. I often think of the palette at work in a poem because, for me, anyway, it seems part of the emotional fabric of the text. Something, subconsciously perhaps, brought the birds to me. The last line seems to contain a kind of impossible vibrancy of colour or clarity, something like the electric buzz with which you wake from a falling dream and realise so suddenly that you’re yourself.

Daydream of the Jacket

My new vintage Houndstooth jacket was catching eyes
in the aisles of the supermarket. I felt like someone else,
an older man perhaps, a taller man, a man without a beard
and when I saw myself reflected in the freezer glass, I was.

I felt I had known myself for many years up to this point.
I stood like the coy in decoy in the quiet supermarket
between the frozen raspberries and the shredded suet
when my neighbour Mrs Carmichael rounded the corner.

Coconut oil, coconut milk, desiccated coconut:
her basket was a who’s who of coconut.
I supposed she was cooking something with coconut
though Mr Carmichael had always been the one to shop.

Together at the checkout, she too admired my jacket
and its unimpeachable stitches. This was when
I remembered there had been rain on our wedding day,
burgundy leather in the big car, a rear window, my parents –

that into my jacket I slipped this morning a shopping list
that for all my life I was sure I was someone younger.
Then she said, you are my husband aren’t you, I am, I said
and went home, and since we kept canaries, fed the canaries. 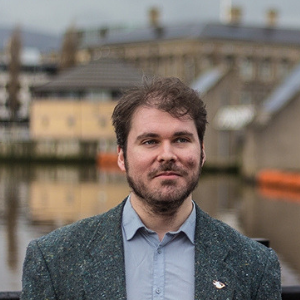 Stephen Sexton was the winner of the 2016 National Poetry Competition. His pamphlet, Oils, published by The Emma Press, was the Poetry Book Society’s Winter Pamphlet Choice. He lives in Belfast where he teaches at the Seamus Heaney Centre for Poetry at Queen’s University. He received an Eric Gregory Award in 2018.

houndstooth by fdecomite. This image has been cropped and filtered. Licence.