Home » Blog » How I Did It: Eric Gregory Award – Annie Katchinska on ‘Snow Festival’

Welcome to the second instalment of our Eric Gregory Award 2018 ‘How I Did It’ series. We asked the winners of this year’s awards to explain the process behind one of their award-winning poems. Here, Annie Katchinska writes about ‘Snow Festival’ and “learning how to write again”. The Eric Gregory Awards will close for entries on the 31st of October, 2018.

Sapporo is the biggest city on Japan’s northern island, Hokkaido – it’s like a more compact, less frenetic version of Tokyo, surrounded by mountains, and it snows pretty much non-stop from November until around April.

I lived there, and loved it, from 2011 until 2013. And I’ve rewritten the next sentence several dozen times because I still don’t know how to say it or how much of it I want to say. While I was in Sapporo, something happened to me which – which what? turned my life upside down, reconfigured my personality, indirectly made me stop reading and writing poems for several years, I don’t know, all of these ways of describing it are irritating because they’re not exactly right. Anyway, years later I still couldn’t talk about it so I started writing poems about it. At first these poems were all very plainly autobiographical and slobbery and desperate, and I had to spend a long, long time essentially learning how to write again, which I guess was useful and interesting but also kind of horrific. Gradually things started to shift. I took the story and twisted it, scrambled it, turned it into fiction, did what I needed to do to get it down. I noticed it settling into what could be called a collection. Often, I’ve wished I could write about something else.

The poem I’ve picked out here is sort of like a prelude, the bit before everything kicks off. It’s set in Sapporo during the annual snow festival (and although the poems are not “about Japan”, Sapporo is the backdrop to a lot of them, I can’t unpick them from that city). For one week, every February, the city centre gets filled up with huge snow and ice sculptures of famous landmarks and cartoon characters, and there are food stalls and souvenir shops and tourists pouring in from all over the place. Here are some pictures: 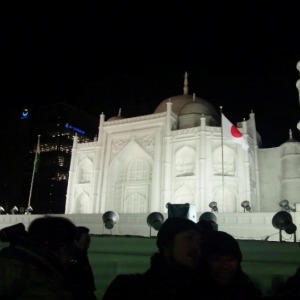 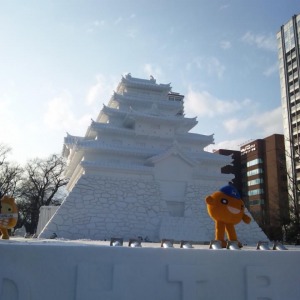 That first year, the snow festival coincided with a period of time when – five or six months after arriving in Sapporo – something not particularly healthy was starting to swirl around in my brain. Maybe it stemmed from culture shock, having reached that point where living alone in Japan was no longer a novelty and certain realities of being there became more difficult and draining. Maybe not. It’s easier just to describe what was happening: when I think about this period now, my memories are mostly of gigantic, oppressive heaps of snow bearing down on me on all sides of the pavement, of dragging my sludgy exhausted body up and down the underground walkways, stumbling through conversations in broken childlike Japanese, trying very hard to have a good time, slipping in and out of contact with people both locally and abroad, waking up in my apartment in the dark and sobbing in a soggy heap on my futon, bewildering times in the hospital, plenty of irrational but overwhelming panic that maybe it would actually never stop snowing… while around me these buildings and creatures were being carved out of snow and ice, and festival music was playing everywhere. (This is making me want to stress that in general I really loved Sapporo and I realise I’m not exactly selling it here.)

Looking back on all of this a few years later, I’d been writing some small, fragmented poems that circled around this sense of the mind slowly crumbling apart, and I wanted to bring this all to a head with something more concrete, gathering together all the desperate weirdness of living abroad alone and going crazy and presenting it in some sort of condensed, unbearable way. Here’s the poem:

What kuma really wants to do is start the year again and again until it’s right
but everyone at the local shrine has a fortune in one hand, a hot dog in the other.
kuma arrived in summer, sniffed the work visa, signed the contract KUMA, and now

thick predictable weight, in the slushy bus station the small man is grinning and naked
under his wax coat, and when kuma falls out of the taxi kuma throws up in the snow,
three oily peanut splats to bury in more snow: and this is how the country: this is

how: on every megastore’s top floor the nation’s popstars squeak, tilt heads and hips,
they’re cupcakes, strawberries, angels smeared and stretched: this is how the country
kuma cannot love begins to slither around kuma like chicken skin greasy and wrong,

sling it off, wherever you go there you sputter, cold paws, a fall on the ice. But it’s
festival season kuma, kuma, a city of sculpted white animals and chiselled sparkly
ice cartoons, Australian tourists slip and slide, mushroom soup from Aibetsu that

tastes like mushroom soup, let’s go see the snow sculptures/how do I eat this crab.
Enormous snow tajmahal snow mickeymouse snowrocket, and in underground walkways
a stout pickled kuma, kuma’s been picked up and dropped in this postcard why did you

come here how long you gonna stay but here is kuma despite despite – Fight against the
sweep of it, kuma can’t – Disentangle what kuma wants from what kuma wants to want –
Rice dumplings settle heavy in kuma’s stomach like snow. kuma never knew. Early sun

makes the snow blue and yellow, train carriages rattle with snowboarding gear but kuma
gets there and the surgery’s closed, kuma’s baby language buckles, Hello my name is nice
to meet you please be good to me a big and wobbly kuma face, long and soupy kuma arms,

kuma is a desperate kuma encased in ice. kuma called it home and lied. There are bears
on the city’s outskirts, not button-faced, no porridge paws or fur like sugary buckwheat
but a rough invasion the city will not assimilate. Down blizzardy Route 36 lined with

Kuma means “bear” in Japanese, as in the animal. Hokkaido has a lot of them, and I remember that around the time of the snow festival that year there were some local news stories about an increase in bear sightings around the outskirts of Sapporo. As I was putting the poem together, I got an image of this mangy pathetic little bear cub scrabbling around unwanted at the edge of a cruel, cold city. I found myself getting rid of all the pronouns and keeping kuma genderless and also, in a way, formless: sort of like when you repeat a word until it loses all meaning (and getting rid of the pronouns meant repeating the word kuma kuma kuma everywhere), in my drafts of this poem I kept writing about kuma and focusing in on kuma until this creature didn’t really feel like a bear cub or a person but became just this faceless thing, which I only inhabited for this one poem and then left behind. When I read the poem back now I’m not sure who exactly is throwing up in the snow, or trying to eat soup.

Although I didn’t write any poems in Japan, I did keep a journal in which I wrote various scraps and bits nearly every day. When I went back to writing poems, I found myself flicking through these stacks of notebooks, writing out various phrases and images – the hot dogs at the shrine, the nation’s popstars, Route 36 – and playing around with them, drawing arrows and boxes in the margins, trying to work out why they felt important or useful. I’ve kept a scribbly pen-and-paper journal since I was a child, and (worryingly?) have always felt like I start to lose my sense of self if I take a break from it for whatever reason. I don’t exactly write about “my day” or anything like that, but I’ve often treated it as a private space to put a bunch of observations and feelings and bits of words and experiment with those words in a way that doesn’t feel as pressurising or difficult as sitting down to write a poem.

I ended up putting this poem together in a sort of scrapbook-y way, gluing and mashing bits of sentences together and filling in the gaps with made-up cartoonish exaggerated stuff, like joining up the paragraphs of a journal by doodling swirls and lightning bolts down the page. And although this poem ended up in this fairly fixed and tidy structure, after I was done with it I became more interested in writing things that kept more of that scrappy unfinished-ness to them, so there are other poems later in the collection that are deliberately like that. I like poems that sound like they were handwritten. And maybe I’m giving you the flavour of what was happening, in the way that I was writing about it at the time, but I’ve warped it. Maybe I’m writing something confessional without directly confessing anything. So kuma splits open at the end of this poem, and the rest of the poems are about what happens next. 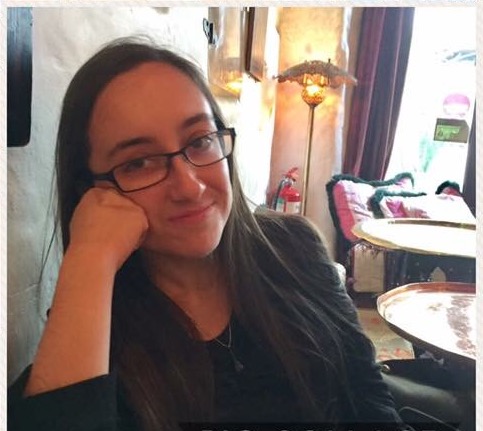 Annie Katchinska was born in Moscow in 1990 and grew up in London. She won Foyle Young Poet of the Year Awards in 2006 and 2007 and her Faber New Poets pamphlet was published in 2010. In 2018 her second pamphlet, Natto, was published by If a Leaf Falls Press and she also won an Eric Gregory Award. She lives and works in London and is completing a postgraduate diploma in child and adolescent counselling.