“Wigged w/ cirrus”, “I shall be in a woman’s likeness…” and “LISTEN”: these are among the first notes I put toward the Malkin sequence, scribbling with sudden enthusiasm on a train from Lancaster to Cambridge back in June 2014 (the muses, as has been well-documented, often take the train). The Pendle Witches had fascinated me for a long time, and I’d previously spent three years living in Lancaster, where their presence in street signs and pub names is almost ubiquitous; it was only a year after I’d moved away from them, however, that they tracked me down again and, this time, took control. Between June and October of that year, I could focus on nothing else: working at Starbucks for a stint in September, I distractedly scalded my hands with such regularity that the manager had to remove me from the bar.

The story of the Pendle witch trials is likely familiar to most readers, and bears more than a passing likeness to the later trials in Salem. I suppose I ought to comment at this point on my use of historical material in the poems. I’ll try to segue via an anecdote: when performing the sequence at a literature festival earlier this year, I was heckled throughout by a drunk man who, once the performance was over, approached me and demanded to know where I had found my ‘facts’. I told him that where records of witch trials are concerned, it is hard to say where, if at all, the ‘facts’ exist: the primary resource upon which much discourse on the Pendle trials relies is the record of the court’s clerk, Thomas Potts, whose misogyny and longing to ingratiate himself with the local magistrate (and, by proxy, King James I, who feared both witches and catholics) lends a partisan pale to his descriptions.  In The Wonderfull Discoverie of Witches in the Countie of Lancaster he describes Anne Whittle (alias Chattox) as “a very old withered spent and decrepit creature.” Others are dealt with even more harshly: Elizabeth Device, for example, is a “barbarous and inhuman monster…branded with a preposterous mark in nature, even from her birth, which was her left eye, standing lower than the other.”

I did worry when I started to rummage through this thistly, bias-heavy mess.  But remembering my intention – to “LISTEN” – I came to a conclusion: it’s the poet’s role in tricky times to stand out in the rain and hope that lightning strikes; notes like those of Thomas Potts may be viewed as useful offroad maps detailing where to stand for peak exposure.

With this in mind, I started to expand upon what Potts had written (primarily, his record of Chattox’s description of a feast summoned for her by the devil, following her introduction to him by her friend/rival Demdike), by asking questions of firstly a personal and secondly a factual nature, e.g. What might Chattox have thought she stood to gain by claiming an acquaintance with the devil? What kind of food might appear at a fantasy buffet in 16th-17th century Lancashire? The latter led me down something of a research rabbit hole, winding up (as Jacob Silkstone of The Missing Slate noted) with everything from a fine wheaten yeast bread to the frumenty-venison pairing found in Wynnere and Wastoure and the Alliterative Morte Arthure. 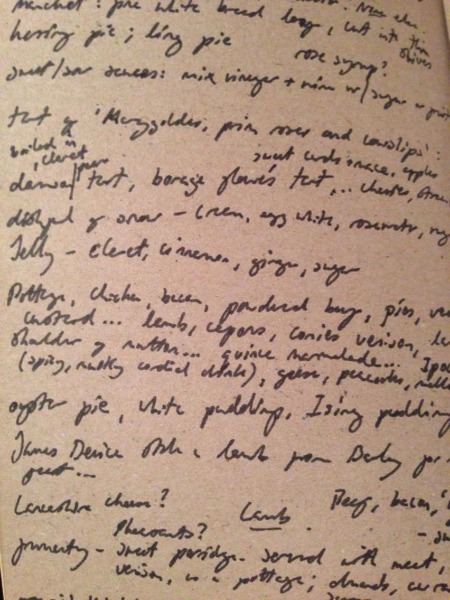 Since reading Ted Hughes’ Poetry in the Making as a dewy-eyed teenager, I’ve tended toward freewriting as a way into a first draft – I’ll sit myself down for a period of twenty minutes or so and write constantly on a subject for that amount of time, not lifting the pen from the page. 90% of what results is utter balls, to put it bluntly, but what remains usually provides a starting point for something better. This was the case for the majority of what’s contained in Malkin; the rest unspooled itself in later drafts (one of the best pieces of advice I received as an undergraduate was Paul Muldoon’s suggestion that I try “drawing out” or expanding on each line or detail of a poem by asking consecutive questions of it: I still do this with second drafts, and so on, today). Time for another anecdote: toward the end of the project, something more like a Yeatsian automatic writing occasionally took hold; during one particularly terrifying episode of sleep paralysis, I thought I’d been visited by Jennet Device (the youngest of the accused, as well as one of the main accusers), who expressed to me in no uncertain terms that I had been writing her “all wrong”, and that I had better fix it. Needless to say, I obeyed. 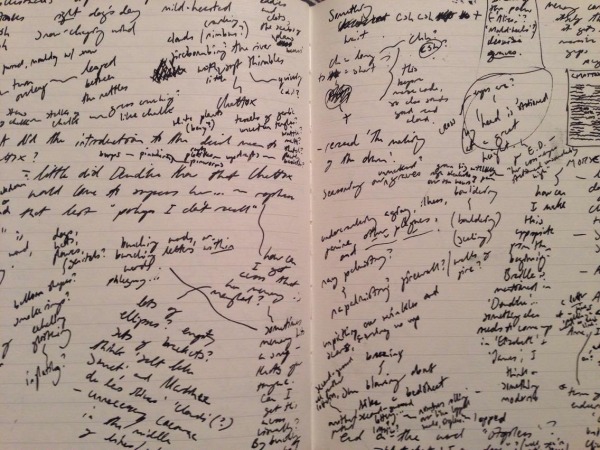 I had intended when beginning the collection that each poem should have something formally ‘distinctive’ about it – something that would make it more completely itself or more an invocation, a spell, in its own right. There are also many things present in the Malkin poems that were patently not present at the time of the trials (e.g. blimps, braille, Bedlam, some other things that don’t begin with a ‘b’; the intention here was to suggest the speakers’ surviving through to our time, having seen also the events in between). In the case of ‘Anne Whittle (alias Chattox)’, these combine into the veiled presence of Morse code in the poem – considering that Chattox’s defining characteristic was allegedly “her lips ever chattering and walking: though no man knew what” (Potts), this seemed an obvious choice.

The only way to integrate this into the poem was by going over it by ear, repeatedly. It took a several days and a lot of cutting before the piece started to sound right as well as making sense. Overall, the poem went through nine redrafts, the last of which required something new entirely.

The ideas behind free spelling really require an essay or two to delineate, and we’re here to talk predominantly about process, so you’ll just have to trust me for now when I say that spelling ‘incorrectly’ is a Legit Poetic Technique. The role free spelling plays in Malkin is, on a macro-level, one of disorienting the reader in time (in this its goal is similar to the goal of unorthodox spelling in Paul Kingsnorth’s brilliant novel The Wake, set immediately after the Norman invasion of 1066) – many of the orthographic irregularities bear a similarity to Middle English spelling, but there are also spellings closer to those found online or in text conversations. On a micro-level, every word is considered for its individual visual and emotionally associative properties, and for its properties in the context of the wider line and poem.

Certain spellings in each poem (e.g. in ‘Chattox’, “oevr” and “skhul”) were decided as the poem was being drafted, though I tested them against other options to be certain of their appropriateness. Others (e.g. “sprorling”) arrived after experimentation like that in the lists below. 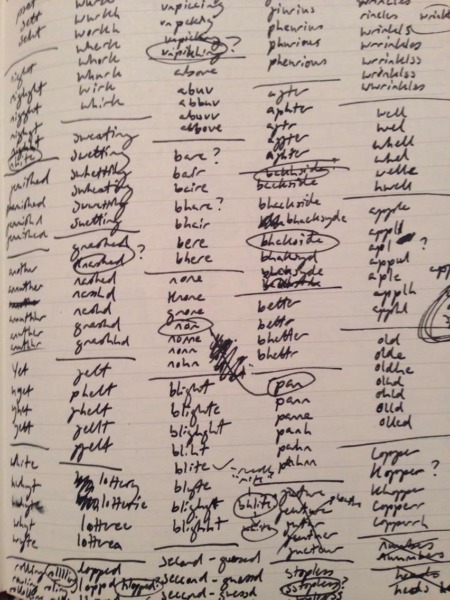 Eventually the poem ended up as it appears at the bottom of this article. In the final stages, I realised its shape had become quite important to me – a steady lengthening of lines, then shortening again starting from the middle, excepting that last line that runs on ridiculously – and suggested that the good people at The Emma Press flip the poem onto its side to preserve that. They agreed. So, here we are. 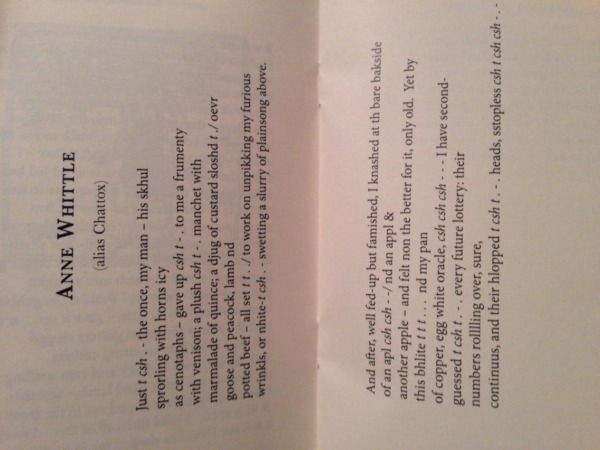 Just t csh . – the once, my man – his skhul
sprorling with horns icy
as cenotaphs – gave up csh t – . to me a frumenty
with venison; a plush csh t – . manchet with
marmalade of quince; a djug of custard sloshd t ./ oevr
goose and peacock, lamb nd
potted beef – all set t t . ./ to work on unpikking my furious
wrinkls, or nhite-t csh . – swetting a slurry of plainsong above.

Camille Ralphs (b. 1992), formerly Senior Poetry Editor at The Missing Slate, is currently a postgraduate student at the University of Oxford, and is the current president of Oxford University Poetry Society. She recently won the University’s Lord Alfred Douglas Memorial Prize for poetry. In April 2016, she appeared on BBC Radio 6 Music with Cerys Matthews to discuss her debut poetry pamphlet, Malkin, which was published by The Emma Press in November 2015. Malkin was shortlisted for the Saboteur Award for Best Poetry Pamphlet earlier this year.