Home » Blog » How I Did It: Michael Marks Edition: Fiona Moore ‘Sleep Sonnet’

I was on a suburban train somewhere in the dense network of railway lines in south London.  I knew my destination by name only and while travelling had no idea of the route so was lost, sort of.  I like maps and usually know where I am on the map in my head.  Being lost can be good for writing.  So can being half asleep, which was probably a result of night-time sleeplessness.  The first notes for this poem are in a small notebook that would have been in my bag.  I must have woken up enough to write them, even though the poem is spoken from the night.  The fragmented, unpunctuated syntax was already there.  So was the tone – dreamy yet tense? I don’t feel comfortable describing the tone in my own poems!

Here’s the notebook page.  Halfway down between the first two drafts I’ve written ‘turn it sideways   sleep sonnet’.  The alternative sets of broken parallel lines show I hadn’t yet worked out how to do that. 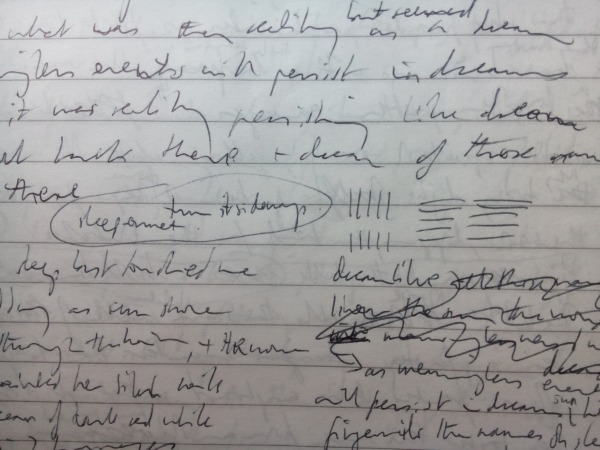 The lying-down sonnet’s final form followed when I wrote out the draft in my main notebook.  The first four lines (8 half-lines, octet) take place at midday; the last three (sextet) at night.  Each line is in syllabics, a regular pattern of 8 + 6.  None of which matters except that it was fun to devise and gave me limits to write within.

The combination of syllabics and gaps I hoped would convey the jerkiness of being half asleep on public transport and continually woken up.  The three night lines are less enjambed.  Someone later commented that famous practitioners of syllabics such as Marianne Moore and Thom Gunn tended to write tightly and undreamily.

The first one-and-a-half lines and the last line from ‘her fingernails’ were there from early on but the rest went through a lot of redrafting.  I took one draft to a workshop with Mimi Khalvati who said the poem was for the ear (not for the eye or to make sense); it lost its music where it lost the –ay sounds, which also happened to be where it became logical.  Mimi thought the form obscured the sounds; I changed the sounds, not the form.  I removed a passage that she called ‘almost Wallace Stevens gone nailvarnishingy’.

The form of Chelsey Minnis’ dot poems was in my mind – I’d been reading her thanks to Roddy Lumsden in one of his Poetry School courses on Americans – long ellipses broken by occasional scraps of text, as in the quote below (from a review of her book Bad Bad on Ron Silliman’s blog).  You’d never guess the bad girl connection but early drafts of ‘Sleep Sonnet’ marooned each phrase amid long rows of dots. 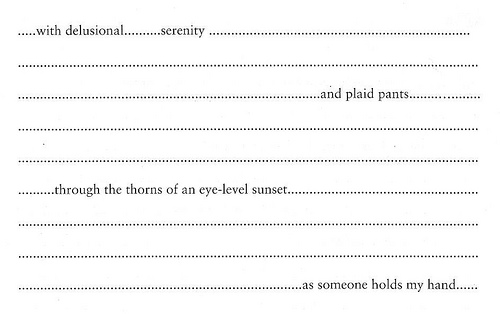 Another influence was Philip Nikolayev’s embedded sonnets which I find fascinating (and blogged about here), though ‘Sleep Sonnet’ is one undivided sonnet, rather than sonnet + sub- or alternative poem.  ‘Heart’, also in Night Letter, isn’t a sonnet but has a sub-poem.  People who have written their own embedded sonnets after Nikolayev include Hannah Lowe and Geraldine Clarkson.

I love it that sonnets offer a set of rules, with variations, plus several centuries of evolution.  Now it’s open season on how the form can be stretched or challenged or deconstructed while still saying to the reader, Sonnet.  The Reality Street Book of Sonnets is an excellent anthology of innovative 20th and 21st century sonnets.  (I blogged about it here, with some samples.)  It doesn’t contain any lying-down sonnets but in the background the book was there as inspiration.

In ‘Sleep Sonnet’ the lostness of being sleepless and alone at night is explicit in the sextet but it was that daytime sense of being lost that set the poem going.  In early drafts the woman painting her nails was also chatting in two languages.  As she was in what passes for real life.  One was English and the other a South Asian language I didn’t understand; the enjoyable disjunction of listening to her voice spread to the station names and varnishing of nails until nothing made sense.

The poem was published in Magma, on the final page which seemed appropriate.  When HappenStance publisher Helena Nelson and I were choosing poems for Night Letter she picked out the theme of sleeplessness.  So ‘Sleep Sonnet’ was in, which meant manic last-minute redrafting of lines 5-6.  It’s in my first collection manuscript; maybe it’ll change again.  Maybe the dots will come back.

Fiona Moore’s second pamphlet Night Letter (HappenStance) has been shortlisted for the 2016 Michael Marks Awards.  She lives in Greenwich.  Her poems have been published widely in magazines; she’s assistant editor at The Rialto, blogs at Displacement and writes reviews. 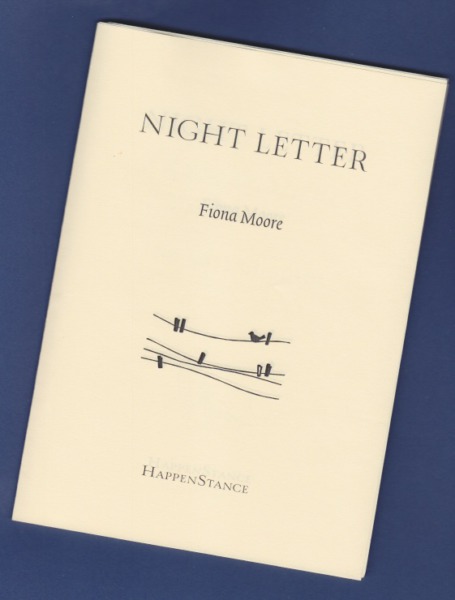