Home » Blog » Re: Drafts – ‘What really happens on a Rialto editing day’

Holly Hopkins and I, your editorial developees, have been asked to shed some light upon what we actually get up to when attending an editorial meeting of The Rialto. Herewith, a joint diary of a recent trip to Norwich, where selection of some poems took place.

NB: Unless otherwise stated, it can be assumed that all times the subject of all conversation was ‘poetry’ and tangentially-related matters.

11.03 – HH finds RD loitering, with a lack of poetic intent, at Liverpool Street Station, signified by his reading of the autobiography of Swedish footballer Zlatan Ibrahamović. RD has reached the part where Zlatan has signed for leading Italian club Juventus, and asked for a Ferrari Enzo as part of the deal, and the player is reflecting on how having 1 of the only 399 cars made gives him “a feeling that I’ve got to work harder in order to deserve it. It prevents me becoming complacent”, and RD is about to launch into a peroration about how that anecdote is actually a good metaphor for the writing of poetry when he realises that HH is already in the queue for the ticket barrier.

11.03 – HH finds RD who immediately wants to tell her about football. Why do people think this is appropriate? HH tries very, very hard to pay attention; however she is more concerned about finding the correct platform, as the indistinct tannoy announcement appears to have moved it.

11.34 – HH and RD discover that the quiet coach that they have booked to sit in, to additionally review their folders of poems, is actually a decommissioned first class carriage and hence have the fear for the rest of their journey that they will be turfed out from it.

12.07 – Hunger being a greater threat to the optimum condition of reviewing poems than the fear of being made to move carriages, lunch is taken.

12.12 – HH learns there are neither plug sockets nor wifi in said carriage, casting doubt on whether it ever as a first class carriage at all. However, the little table lamps are still working and there are curtains, which adds picturesque charm. RD is deep in poems; HH needs to send day-job related emails.

12.22 – HH achieves some degree of online access by utilising her mobile phone; her triumph in this achievement is tempered by discovering that her day-job emails have bred.

12.39 – RD takes the following photo, and decides that it is an obvious but effective metaphor for the sort of feeling that the best sorts of poem can leave you with: 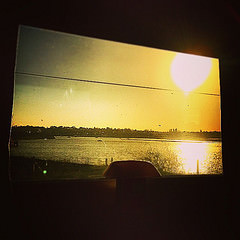 12.57 – Review of folders and hence preparation for editorial meeting is completed.

13.07 – RD completes a first draft of a poem, featuring the word ‘lycanthropy’.

13.16 – HH loses a needle and thread, which was to be used to undertake some repairs on various items of clothing. RD is about to suggest that is a metaphor for the poetic work that HH and RD are about to undertake, but HH gives him a look.

13.20 – Train arrives at Norwich station, where a small Christmas tree is decorated with stuffed toy turkeys.

13.34–13.56 – A whistle-stop tour around Norwich Castle and environs is undertaken. The castle’s prominent disability lift is admired. Conversation ensues on lottery funded architecture and the use of glass, oak beams and atriums in the noughties. The popularity of the upside-down glass-bottomed boat formula is also discussed.

14.00 – HH and RD assemble for beginning of editorial meeting.

14.01 – HH and RD realise that editorial meeting is actually taking place elsewhere, but pretend they knew this already.

14.02 – While waiting for MM of The Rialto to appear, HH decides to read up on publishing using a Ladybird book on display above the shelving unit. This prompts conversation in which RD and NS, The Rialto’s art director, discuss developments in printing technology and reminisce about the old days. HH attempts to follow, but the Ladybird book only goes up to the early 1980s.

14.17 – Actual venue for editorial meeting having been reached, it is decided that no poetic editorialising can be expected to occur without victuals and other comestibles being procured.

14.18 – Victuals and other comestibles arrive.

14.28 – It is agreed that the editorial meeting really should start now.

15.42 – It is confirmed that the ‘real fire’ available in the meeting venue is only real in the sense that a gas flame is, ontologically speaking, real.

16.07 – RD almost sprains wrist attempting to pour tea from, frankly, the biggest and most unwieldy teapot he has ever seen. Inevitable spillage sees hasty removal of various poems and folders from table, to avoid tea stains and other damage to poems. (No poems were damaged in the drinking of said tea).

17.03 – In an attempt to provide one last burst of energy to the attendees of the meeting, more victuals and comestibles are ordered.

17.05 – It is agreed that the continuation of the meeting can wait until said victuals and comestibles are actually cool enough to eat.

17.27 – HH and RD break out in sudden and spontaneous laughter, the source of which is unexplained, and later agreed to be inexplicable.

17.42 – RD takes the following photo, and decides it is an obvious but effective metaphor for the process of selecting poems that has just been demonstrated through the editorial meeting: 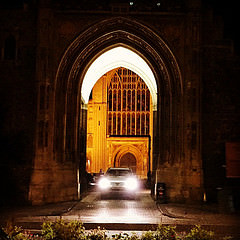 17.44 – Another, impromptu, whistle-stop sightseeing tour of Norwich is undertaken, this time the slant being to celebrate city’s status as a UNESCO city of literature.

17.58 – The team reassemble at NS’s office for a meeting of The Rialto’s advisory board. HH and RD discover there are only enough chairs for one of them to sit at the table around which the advisory board has gathered. In a fit of solidarity, both HH and RD retreat to perch on what might be referred to as a ‘kid’s table’ at the back.

19.17 – Advisory board, plus HH and RD, head out to celebrate Christmas with the finest vegetarian curry available. Chitchat ensues. Bizarrely hot poppadums appear.

20.08 – It is noted that HH and RD’s train to London departs soon and the main meal hasn’t arrived yet.

20.11 – HH and RD try to combine shovelling down food as quickly as possible with creating a good impression for new acquaintances.

20.20 – HH and RD take the rest of their meals with them in boxes and proceed with ill-disguised haste towards their train. This provides healthy exercise to offset their culinary indulgence.

20.30 – HH and RD manage to clamber aboard said departing train.

20.44 – HH finds previously lost needle and thread, lodged in her notebook and mends her coat. RD at this point too tired to offer any metaphorical commentary on the event.

Poets Rishi Dastidar and Holly Hopkins are working closely with The Rialto editor Michael Mackmin on a programme designed to teach them about the process and philosophy of poetry editing. Each month, on a new series we’re calling Re: Drafts, they’ll share their findings on CAMPUS.