And that’s a wrap on the Poetry School / Soda Pictures Paterson competiton!  Thank you to all of you who entered your diary poems. We loved reading your various approaches to the quotidian. A lot of autumn leaves were fluttering about in your poems, many cats were frolicking among them, and Donald Trump was the force behind much of the flutter.

We’re delighted to announce the winner and second place poets, and have added in a few honourable mentions to runners up too. We hope you enjoy reading the poems as much as we did – and heartily recommend a trip to the cinema to see Paterson when it opens.

Highly commended entries were Anna Kisby for ‘Today the Dog Killed a Blackbird’, Barbara Barnes for ‘Up Amesbury’, Ken Evans for ‘Laced’, Laura Tanley for ‘The day, today’ and Rob Miles for ‘Leaving the Library, Thankful’.

Send me our pics, I want to laugh in bed, I text her. They bleep through
two days later. We are posing six months apart and blurry.  Last night, I missed
my train by seconds, so close that one part of me did catch it and waved
from the window to the other half still fuck-panting on the platform, tits
play-doughing out of a shit bra.  I couldn’t sleep
for an hour and a quarter, the exact time between the two slices of me
reaching home in separate taxis, each driven by a brother
who co-owned the firm.  Today, I’m doing nothing but assuming
the recovery position in my favourite outfit – a jumper with
no knickers, the perfect hot/cold combo, like a bowl of baked crumble
and ice cream.  I am glossy magazine educated, so
have known for a while now that my body is an apple.
Similar to a pear or carrot but different-tasting, rounder bellied.
The supporting theory is: I bruise so easy I worry it’s skin cancer.
No, the doctor says, again, it’s just your dark skin. She recommends
scar serum.

When I was bored after service with Mum still counting
the collection then insisting on sweeping from altar to street, I’d sit
in front of a white pillar, Bible open in lap, and I’d wake-dream
a brown woman with tattoos having rough sex in a toilet cubicle.
I can’t remember the man’s face or his body, whether he had either, only that
he needed his love to impact. Nor can I remember what I named her.
Something beginning with N…  When the mum of my then-best friend said
her daughter wasn’t allowed to play with me because I was another N-word –
meaning my mum went round in her dressing-gown to slap her silly
with her tongue, then came back to scatter the kitchen and shred Dad’s
Guardian for not sticking up for us, for never
saying anything – after that I had a sleep-dream in which I grew
a bright green face, granny-smith hued, high polished.
And even though I was green, I was the most Beautiful Woman in the World.
I had the best hair and did humanitarian work. I was interviewed
about both things, each night, for TV.

Rachel Long is an alumna of the Jerwood/Arvon Mentorship scheme 2015-16, where she was mentored for one year by Caroline Bird. She is Assistant Tutor on the Barbican Young Poets programme, and leads Octavia: Poetry Collective for Women of Colour, housed at Southbank Centre. She is currently working on her first collection. 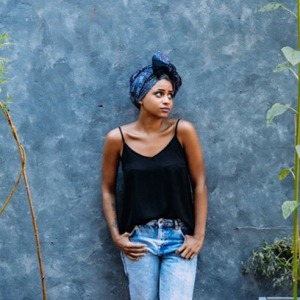 Yesterday, at dusk, I disturbed
a Great Blue Heron
drawing reluctantly from the creek
an awkward rise, legs unfolding,
its grace yet present in the sleek neck
and slow effort
and I supposed, in wild nature, there could be no hurrying
no mistakes, no greed or unkindness
no taking for taking’s sake
no covenant-decreed sacrifice of others.

Then this afternoon I bought a potato-masher
at the Variety Store,
the shopkeeper’s mother
was from Leeds, England, she said
and there are too many I-ranians
coming and taking our jobs
and the President
is letting them live right next door
bringing in their bombs
and they hate us, right
so they can go right back home
and leave the jobs for Americans
for us Seniors, just trying to pay our taxes.

And to my right and to my left
men ate wild Mallard
each an entire duck blooding their plates.

Now this evening, the creek below the pines
is silver-pink
shimmering toward the dark
and I think of the river running through us
low, beneath thought,
quietly asking its questions
in the long grass.

Kay Syrad’s poetry has been published in numerous journals and anthologies and her publications include the collection, Double Edge (Pighog, 2012), and Objects of Colour (2008) with photographer Gina Glover. She is Poetry Editor of Envoi and co-founder with the artist Chris Drury of Vert Institute for art events & writing in East Sussex. She has two novels from Cinnamon Press, The Milliner and the Phrenologist (2009/2012) and Send (2015), which investigates pre-verbal experience. Kay belongs to the international artists’ collective, Sensory Sites, and her artist’s book work of the lightship men: 1000 tasks (2013) was bought by the National Maritime Museum for its permanent collection.

And all I can think is, how glad I am
not to be wearing boots like that,

and how to reach the lido,
and where is the cashpoint?

And by the time I reach the Rio, I guess I’ve passed
Nat West (‘yes,’ says a waiter; ‘it’s back there,

by Boots’) and then all I can see are
cashpoints, and the guy in front of me has his lunch

of two chocolate bars and a bottle of mineral water,
and I say, ‘you left your water,’ and he says,

‘it’s not mine.’ And the guy behind me is smiling and
hoppy on crutches, and I turn to check, wondering

if it’s a scam, and the ATM is
dodgy, and when I’m done and turn to leave he also

turns and smiles again, and I think it’s
suspicious, and not that he might be flirting.

Aisha, and I wonder if maybe it too was never
collected.

There’s horse racing in the pub that smells of piss,
and Nanna’s Food Place doesn’t do tea or have ice,

and in a new Victorian mews, a small girl in a blue
bikini sits in a paddling pool, singing to herself,

and I am in a cool café now, full
of cool people, waiting for my Earl

Grey to brew, and wondering if the
shiny doll torso poking from the cake

was all there was of her.

Claire Collison: Writer, swimmer, teacher, and currently Artist in Residence at the Women’s Art Library, Claire enjoys nothing better than a flaneuse. She runs ‘Writing the City’, designing days out and about for writers who want to discover the joys of writing on the hoof. Her poetry has appeared in Butcher’s Dog, The Island Review, South Bank Poetry, The Compass, and Templar Anthology 2016. She came second in the inaugural Resurgence Prize. 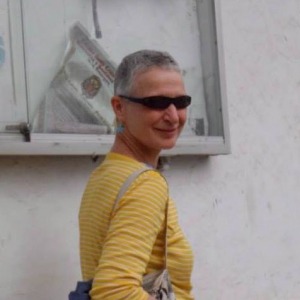 That squirrel keeps digging in the containers we’d planted
with tulip bulbs and fritillaries. I’ve been told to watch
the washing. There’s a feel of rain in the air.

The plumber’s telling me his blood sugar’s high
and what’s that other thing they measure ?
I’d only said, I’m fine and you ? Just being polite –

c’lestrol, thass it – doc says statins but you go a bit
whatsit on them forget stuff and yer joints stiffen up I wanna
stay sharp  – the sky looks full of threat. I’m ready

to dash for the washing about to say sorry I need to –
he just carries on mi blood’s got sticky thass what
Dr Ford says mi blood finds it harder to get up here.

He taps himself on the head – ain’t no fun getting old
mate. It’s then I see the squirrel. Hang on a second, I
say and reach for the Super Soaker.

John Kitchen is a retired head teacher, who lives in Leicestershire. His play ‘Clamber up the Crucifix’ has been performed in various small theatres  in England. He was runner up in a Poetry at the Proms competition. He has had poems published in UK magazines, reads at open-mic venues in and around Leicester and organises two writing groups. 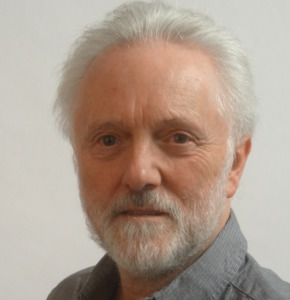