In my previous post and in my manifesto, I mentioned ‘Internet Poetry’ – but what is it? In this post, I aim to give some distinctions of what this form of poetry is, some good examples, and reasons as to why I think it is a sign of a healthy poetry scene.

When I found my Granddad’s secret video collection when I was 13, I knew I should follow my curiosity more. The films he had were, mainly, those that got a big release but were banned in the UK, or were just difficult to get a hold of. I was way too young for the infectious, sex-crazed hordes of Shivers or the ultra-violent japes of A Clockwork Orange but it didn’t do me any harm. Inadvertently, I was exposed to two of my favourite directors – Cronenberg and Kubrick – from a young age.

A curious mind has also been healthy for my poetry. When I watched Roy Anderson’s film Songs from the Second Floor, made in 2000 but only released on DVD two years ago, I found out it was inspired by a Cesar Vallejo poem ‘Stumble Between Two Stars’. After searching for more of his work, the book the poem came from is now one of my favourite poetry books, and the poem has greatly influenced my own work.

On my journeys through the Internet to find new poetry, this curiosity has led me to work that a lot of my poet friends deride as ‘awful poetry’. You know the things I mean: long and boring lists of rhymed couplets about drinking tea, or short and taciturn (and equally boring) descriptions of what that person did that morning, with line breaks. When you keep on searching, though, you end up finding the good stuff, and I ended up finding a lot of it, especially in Internet Poetry.

What is Internet Poetry? I think there are a lot of definitions floating around about what it is, mainly because there are lots of different types of Internet Poetry. I also think that it can be detrimental to outline the schema of a genre, as there will always be something which doesn’t quite fit the pigeonhole.

But, having said that, let me give you my definition.

Most of us would know an ‘eco poem’ if we saw or heard it. It can engulf all manner of issues surrounding nature and our place in it – the destruction of the rainforest, whaling, new flowers in the local forest, nuclear power plants etc. It could be written on anything from paper (trees) to rocks (Simon Armitage’s StanZa Stones project).

So, it follows that…

Most of us would know an ‘Internet poem’ if we saw or heard it. It can engulf all manner of issues surrounding the Internet and our place in it – how we fit our lives in with social media, wasting hours on YouTube, Wikileaks, the Transatlantic Submarine Cables (as documented by photographer Taryn Simon, slide number 14) etc. It could be written on anything from text (blog, PDF), video (YouTube) or image (Tumblr).

This is only a guide and, as you will see in the poets and poetry I will highlight, there are exceptions.

Back to Internet Poetry, I’m going to focus the rest of this post on some of my favourite examples of the form.

***DISCLAIMER: The people that I have shown here may not consider themselves ‘Internet poets’ or that the Internet as a major source of inspiration in their work*** 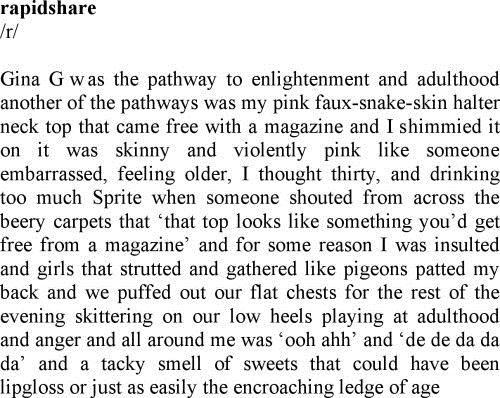 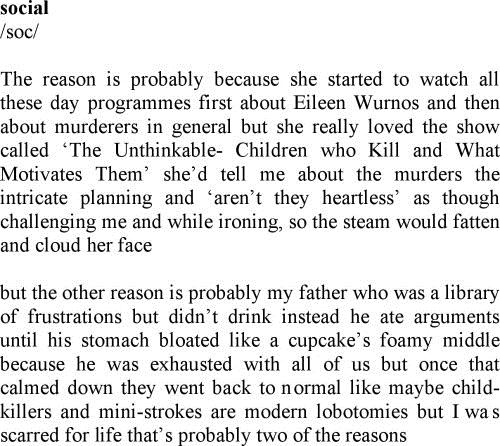 One of the things which excited T.S. Eliot so much about James Joyce’s Ulysses was that he built an incredibly modern novel on Homer’s already existing frame. Eliot called this The Mythic Method, and praised the way “it is simply a way of controlling, of ordering, of giving a shape and a significance to the immense panorama of futility and anarchy which is contemporary history”. We have something similar here in Rachael’s work.

4chan – the infamous image based meme creating website (which popularised lolcats and rickrollling) – has a set of pages where images are collected about specific things (social, random, cute male etc.). What Rachael has done is use it to order her past experiences – her life growing up in a small town in Cornwall, her relationship with her parents – using the format of the website. This construct of defining herself through images that we are aware of is a pleasing and enjoyable experience, a zooming in and out of an identity trying to clarify itself alongside well-worn and malleable images, crafting something new.

It is very hard to mention the way that poetry is using the Internet without mentioning Steve Roggenbuck’s wonderful videos. I first encountered Steve’s work through his project i am like october when i am dead, which I am still a huge fan of, but he is perhaps well known for his quick cut, pseudo-inspirational, often hilarious short films videos. These works reference internet phenomena as well as being Internet phenomena themselves.

What I like about Steve’s work is its immediacy – spelling mistakes and all, it is like a wonderful discussion with a friend on MSN Messenger. Don Share, the editor of Poetry said: “The liveliness in Steve’s work is direct — deceptively so. You connect right away. But what he does is complicated”. He’s on all platforms, too – he blogs, he’s on Vine, Instagram, Facebook, Twitter. He’s an enthusiast, an awfully nice guy and poster boy for Internet Poetry (there’s not many contemporary poets who have been in the New York Times Magazine).

The resurgence of Concrete Poetry’ in the 20th Century was one of the most exciting developments of poetic history. Mary Ellen Scott’s book on the subject is enthralling, how the writers-cum-artists were forever bending and fracturing their words and ideas, which echoed the rampant commercialisation in 50’s and 60’s. The simplest of computers now allows anyone to continue making Concrete Poetry – using the ‘Print Screen’ button and the rudimentary cropping tools in Microsoft Paint or the Mac equivalent, the writer can play around with how text appears on the computer to create something poetic.

Steve Roggenbuck   – yeah, that guy – edits the blog Internet Poetry – a collection of poetry as screenshots from around the internet and I think it is the second phase of Concrete Poetry. Above is my attempt. The project at once shows the flexibility of the writer to use an everyday too like the Internet for creative writing usage, and it also shows how the forms of the Internet have the capacity to be strange, beguiling and profound.

Writer, essayist and – importantly – poet Harry Burke’s website is incredibly simple, but it underlines a crucial point about Internet Poetry.

What is this website? It is a collection of Harry’s poems, which I have seen published in numerous places. I enjoy the poems, a lot. As Hans Ulrich Obrist has noted, the website is a blank space which presents the poems without a context. But, as Harry says, “I like the way it makes the language different. It’s a constant dialogue.”

This website has been updated several times since I have been reading Harry’s work. A while ago it was fragments alongside longer poems, as well as parts of essays. It was rolling, continually shifting view in to Harry’s current poetic practice, which is fascinating.

Maybe you don’t think this is important, and that is just posting notes on the Internet. But consider this: a friend of mine said to me the other day “Carol Ann Duffy should put all her Laureate poems up on a Google Doc, even if they aren’t finished”. In my mind, If Carol Ann took Harry’s approach, this insight would help shuffle off the archaic, threadbare robes poetry dons in public, especially when the Poet Laureate is, to most people, the voice of poetry in our country.

The painfully boring discussion of “Is the book dead?” misses the more interesting question of “How will new ways of publishing affect ‘what’ we read?”

When the BBC, The Space and London Review of Books worked on a project with Will Self on his excellent essay about Kafka’s story ‘The Country Doctor’, they came up with Kafka’s Wound – a multimedia interpretation of the essay, with videos, hyperlinks and audio recordings. They called it a ‘digital essay’. It certainly is that – I’m reading it on the computer – but, as Will (him)Self said in the discussion panel about the project, “it is just an essay with a bunch of bells and whistles”.

Self is basically saying the idea isn’t fully formed yet. I wouldn’t have the same derision he does, but I see his point. What I’ve shown in my examples here is that poetry is arguably far ahead of the written arts in acclimatising itself to this new digital publishing format. Not only that, but it is working with the set formats to create new work, inspired by the very thing that is changing it. If proof be needed that poetry is in good health, the evidence is there. You just have to be a bit curious.

Alex MacDonald lives and works in London. He has had his poetry published in The Quietus, Clinic II and English PEN and was shortlisted for the Poetry School / Pig Hog Poetry Pamphlet Competition. He hosted a series of readings at the V&A Museum on independent poetry publishers. He is currently Digital Poet in Residence at the Poetry School.