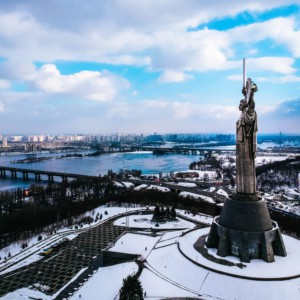 Explore one of the world's greatest neglected literatures with expert Steve Komarnyckyj.

Ukraine is the largest country whose borders are entirely in Europe, but it remains oddly invisible on the international literary landscape. It was occupied by Russia for three hundred years and the language was frequently prohibited, Ukrainian books were burnt and a whole generation of authors, known as the Executed Renaissance, was destroyed by Stalin in the nineteen thirties.

Yet Ukraine, despite the repression of the Tsarist and Soviet eras, developed a literature of “rebels and risk takers” in the words of Cambridge University’s Rory Finnin. Taras Shevchenko (1814-1861) is the only major European poet to have fought his way out of serfdom and become a great writer. His work largely founded modern Ukrainian poetry. Lesya Ukrainka (1871-1913) was a pioneering feminist, one of a trio of great Ukrainian female writers who left startlingly original work. Her plays, like Shakespeare’s, articulate what it means to be human. Mykola Kulish (1892-1937), regarded as the greatest Soviet playwright, was held in solitary confinement at an Arctic camp and then murdered along with 289 members of the Ukrainian intelligentsia. Volodymyr Svidzinskyi (1885-1941) survived the deaths of his colleagues only to be burnt alive in 1941 as the Soviets fled before the Nazis advance; a human casualty of the scorched earth policy. Another generation of Ukrainian authors, known as the “Sixtiers”, emerged in the post war years and challenged Soviet repression: their work was banned and some of them including Vasyl Stus (1938-1985), a profoundly innovative poet, died in labour camps.

Yet the literature survives like a nettle breaking through concrete. Since regaining its independence, Ukraine has re-materialised on the map of Europe and is emerging onto the global literary scene.  There is growing international interest in the work of Ukrainian authors such as Lina Kostenko (1931- ), one of the leading representatives of the Sixtiers,  who wrote her first poem on the wall of a dug out in WW2. This course will Transread Ukrainian poetry alongside English writers to help poets explore one of the world’s greatest neglected literatures and develop exciting new work.

To apply for a concessionary rate, please send relevant documentation showing your eligibility for one of our concessions to [email protected] Conditions of eligibility are detailed here.

If you have any questions or wish to be added to the waiting list of a sold-out course, please email [email protected] For more information visit our Online Courses page.

Steve Komarnyckyj is a poet and literary translator who is addicted to rescuing disabled dogs from Bosnia. His literary translations and poems have appeared or featured in Index on Censorship, The Guardian, The Economist, Modern Poetry in Translation and many other journals. He is the holder of two PEN awards and a well-regarded English language poet whose work has been described as articulating ‘what it means to be human’ (Sean Street). He is currently working on a sequence of poems built around the concept of re-imagining Britain as part of Europe.

'Steve was an excellent tutor, his breadth and depth of knowledge combined with his willingness and enthusiasm to share work related to the subject of the course made it an immensely rewarding experience. His feedback was always considered and constructive, providing suggestions for improvement and alternative approaches.'