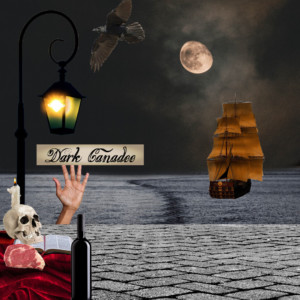 Calling Poets, Pirates, and Dreamers; come sail with us to Dark Canadee.

We are pleased to announce a new opportunity with the T.S. Eliot Prize-nominated Glyn Maxwell. This exciting new project, Dark Canadee, is a twisted poetry fantasy, set in an alternative Canada Water, and tailor-made by Glyn for the times in which we find ourselves. The project takes the form of a serial literary fiction where, each fortnight, 6 poets sail into a dark port to take shelter from a swirling plague and join clandestine writing workshops. The world is fabricated, but the poems are real, submitted by participants before each voyage, and Glyn’s feedback on these is genuine, being skilfully woven into each narrative. Part avant-garde tutorial, part publishing experiment, this promises to be a unique experience and we hope you would like to join us for these first sessions.

After booking a spot, all we need from you are the following materials and the next instalment including these will be published a week later:

(a) A poem (one side) that you would like feedback on.
(b) Seven Things About Yourself, true or false, that can be used in the fiction (100 words max).

You can see the pilot in the series here, read the First Voyage here, and the Second Voyage here.

As you’ll see, the project is expansive, Glyn’s feedback is detailed and extensive, and the overall experience is totally unique. We will publish each instalment in an online Poetry School Magazine, featuring innovative writing, reviews, criticism, and new poetry. Alongside being an exciting piece of literary fiction and an experimental poetry workshop, we envision Dark Canadee as an anthology of the poems published within it and a future compendium of sage advice, critique, and direction on what readers can learn about poetry and apply to their own writing and lives, in the vein of Glyn’s earlier books On Poetry and Drinks with Dead Poets.

To book yourself onto a voyage, please click ‘Purchase Course’ on the left and then you can select your specific dates at the next stage; we’ll then liaise with you directly to discuss your ‘7 things’ and poetry submission.

The first 3 voyages are scheduled for 24 March, 7 April, 21 April with the submissions being due on those dates and each new instalment being published on the Friday of the next week.

Glyn Maxwell was born in England to Welsh parents and now lives in London. He has won several awards for his many poetry collections, including the Somerset Maugham Prize, the E. M. Forster Prize from the American Academy of Arts and Letters and the Geoffrey Faber Memorial Prize. His work has been shortlisted for the T. S. Eliot Prize (four times), alongside the Forward and Costa Prizes. His collections include How The Hell Are You (2020), Pluto (2013); One Thousand Nights and Counting: Selected Poems (2011); Hide Now (2008); and The Nerve (2002). Many of his plays have been staged in the UK and USA. His poetry guide On Poetry (2012) was described by Adam Newey in The Guardian as “the best book about poetry I’ve ever read”, and sold out its first run within five days. His novel Drinks With Dead Poets picks up the thread of On Poetry and uses the comic novel form to deftly deliver poetry criticism and hilarious characterisations of canonical poets.

'I love the concept and the story. The whole premise and the world the poems/poets inhabit is a place I want to go to more - and I will be eagerly following the progress of the rest of the voyagers - and the world of Dark Canadee.

I really appreciate the opportunity to have my poem read by Glyn Maxwell - and to receive such depth of critique in the context of the play was just great! Also to read the other poems and his responses was enlightening and so enjoyable too to stay immersed in that world.

So thanks to him and to Poetry School for this course/experience and the opportunity for imagination at this time.'