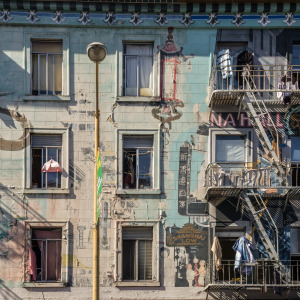 Travel to mid-century California to take influence and inspiration from the ‘San Francisco Renaissance’.

Driven by a need to categorize, mid-century bay area writers and artists adhering to an avant-garde aesthetic were identified as belonging to the ‘San Francisco Renaissance’. Poets of the movement challenged collective attitudes on art, nature, spirituality, and sexuality. Some sought balance in their writing through studying the Tao Te Ching and by practicing Buddhism while others wrote political, visionary poems. Poetry written by three major figures of the period writing in a coterie ‘of fellow outsiders’ – Robin Blaser, Jack Spicer, and Robert Duncan, explored themes such as cosmology, magic and thresholds, personal and made-up mythologies, and language and the body. They wrote poetry inspired by Dante, Lorca, Orpheus, Freud, and others, which often resulted in poetries of fragmentation, of silence, and of interrogation. In this course we’ll look to explore the ‘serial poem’ form which Blaser and Duncan wrote after in their ongoing poems ‘Image-Nation’ and ‘Passages’ and where Spicer suggests that poems ‘do not connect they correspond… create resonances’. We’ll look at Jack Spicer’s magic workshop and write poems after his ‘practice of outside’, where the poet receives ‘dictation’ from outside that penetrates limitations, opens to numinosity, and offers an outside perspective that frees the spectator from the hold of the unspectacular.

Despite the movement being largely male-centric, we’ll write poems inspired by powerful bay area women addressing the disquiet of exclusion and marginality, looking to poets Diane di Prima, Joanne Kyger, and artist Fran Herndon. We’ll consider what shapes our poems will take when inviting these peripheral materials in to construct our own bodies of text, so much so that the eye cannot keep up with its current. We’ll be inspired, and surprised, by the shapes our poems take up, as Blaser writes in an Image-nation poem, ‘the body / burns… / and re-opens / into something / without lineaments’.

Wanda O’Connor has a PhD in Creative and Critical Writing and teaches poetry and literature in the UK and abroad. Recent writing is available in anthologies Wretched Strangers (Boiler House Press, 2018), The World Speaking Back: to Denise Riley (Boiler House Press, 2018), Bad Kid Catullus (Sidekick Books, 2017), and The Best Canadian Poetry (Tightrope Books, 2014), and in several journals including Molly Bloom, Asymptote, Magma, and Poetry Wales. Her poetry came second in the Thomas Morton Memorial Prize in Literary Excellence, and her pamphlet damascene road passaggio is available to order through Above/Ground Press.

‘The Poetry School is a remarkable resource of knowledge, guidance and new friendships formed around the desire to learn more and write better. The range of workshops and their leaders is, I think, unparalleled.’